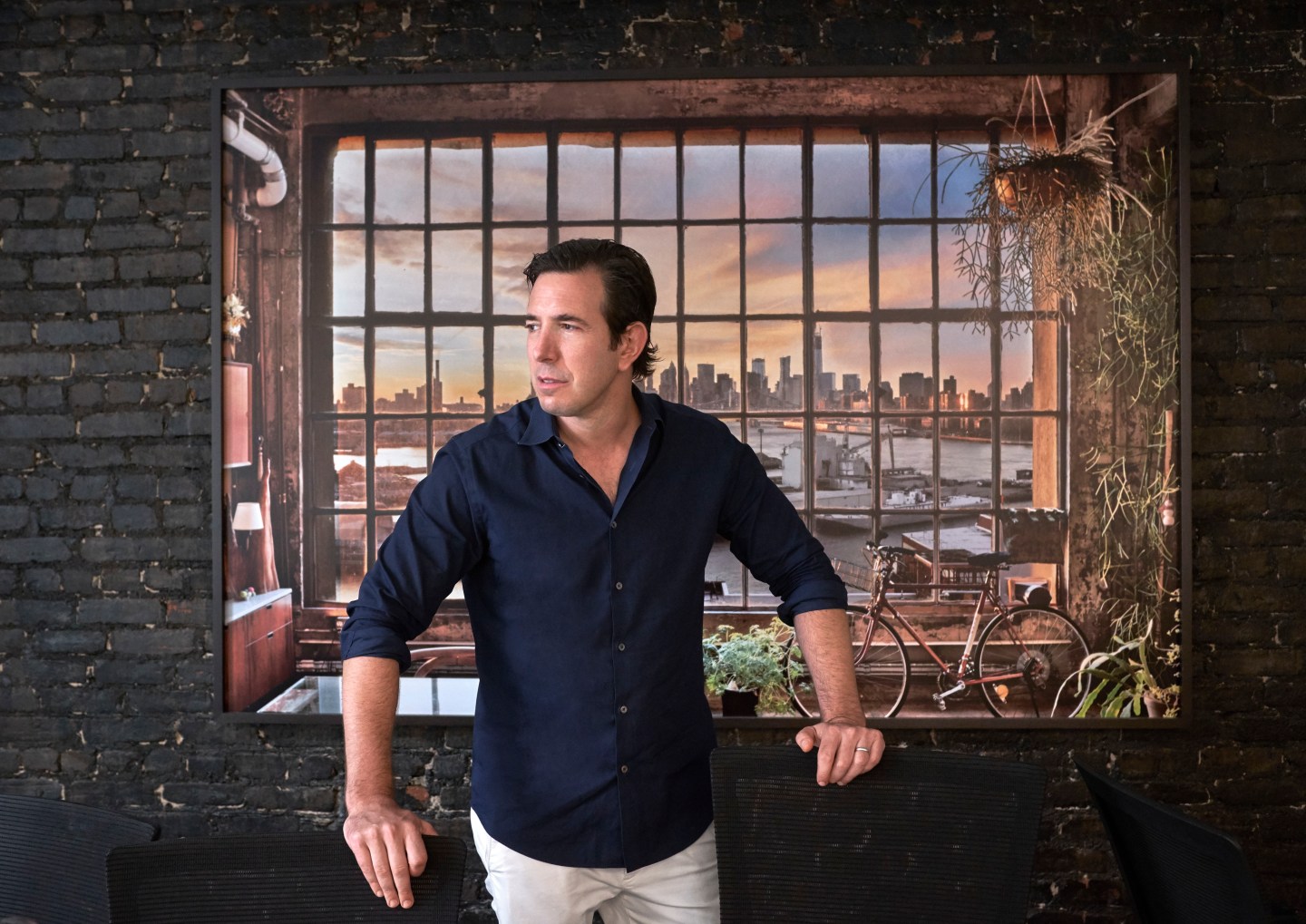 Bradley Tusk is not your typical venture investor. Before he was a VC, he worked in politics as ex-Mayor Michael Bloomberg’s campaign manager and Sen. Chuck Schumer’s communication director. He also served as the deputy governor of Illinois, working for the now-incarcerated former governor Rod Blagojevich.

He’s the man behind Tusk Ventures, a political consultancy and venture firm that works with startups facing regulatory hurdles. The political advisory arm works with startups in exchange for equity. On average, Tusk takes $60,000 per month in equity — more if it’s later-stage, less if it’s earlier-stage. The venture arm, which just raised $36 million for its debut fund, acts more as a traditional investment vehicle.

“If you’re Lemonade, for example, and you need an insurance license in every state, you have to give us equity to get that for you, but we also won’t take you on as a client unless we get investment rights,” Tusk says. “That gives us access to deals a first-time fund would never typically get. Our strategy — for better or worse — is really different.”

The firm’s portfolio companies include FanDuel, Lemonade, and Rippe, but in the tech world, Tusk Ventures is most known for its early investment in Uber when it was just a “small transportation startup.”

Below is Fortune’s conversation with Tusk.

FORTUNE: You started working with Uber very early on. How did you go from politics to tech?

TUSK: I was sitting in a meeting when a friend called and said, “Hey, there’s a guy with a small transportation startup. He ran into some regulatory problems. Would you mind talking to him?” So I became Uber’s political adviser that day, and I got really lucky when Travis [Kalanick] called me back and said, “I can’t afford your fee, will you take equity instead?” My fee at the time was about $25,000 a month, and I had to take half in equity. I continued the same arrangement over a couple of years, and because it was Uber and because it was early, the amount of stock I ended up with became pretty valuable.

Uber was the only tech company I had been working with, and then the Mayor of New York decides that he wanted to halt Uber’s growth. There’s this saying, “You can’t fight City Hall.” But we did. We ran this vicious campaign and we won. It got enough attention to the point where founders who were starting to deal with regulatory problems started coming to us, and that allowed us to create a new approach to venture.

How does raising a fund for the first time compare to working on a political campaign?

TUSK: One of the reasons I enjoy working with startups so much is because it’s a lot like a political campaign — especially early-stage. It’s super high energy, a lot of intensity, people who believe in something that doesn’t make money. The exit is very similar to election day.

Where it was really different was that raising a fund was really hard. Everyone who raises a first-time fund probably says it’s really hard, but it’s got to be easier if it’s three people at Sequoia starting their own fund. You know everyone already, you have your track record. But we didn’t know anybody. Jordan Nof, who runs our investment team, had relationships from his time at Blackstone, but I think a lot of LPs were initially confused by the structure. It took us a year and a half to raise Fund I.

When you started working with Uber, it was only operating in San Francisco. What are examples of ways you helped the company expand & overcome some of those regulatory hurdles?

TUSK: When they opened in New York, they almost immediately got a cease and desist letter from the Taxi and Limousine Commission. We were able to explain that Uber was a platform, not a taxi company. That concept now makes sense, but it was totally radical back then. And then we had to fight this thing out hand-to-hand combat everywhere — Boston, Philadelphia, Washington, D.C., Vegas, Miami, Houston, Dallas, L.A., Seattle, Denver, Chicago, you name it.

Taxis are such a local thing that every single city tried the same playbook to make it impossible for Uber to operate. It would sometimes be a big public fight, and we would mobilize our customers. Other times, we were able to work with regulators and City Hall to help them understand the value of Uber. It made it easier to expand more quickly once people started to understand what Uber was. Some markets — Vegas and Miami especially — were very protective and very closed, but we were able to break through in the end.

Through your work with Uber, you’ve gotten to know Travis well. So when people refer to him as a ruthless CEO with no regard for the letter of the law, do you think that the public’s perception of him matches reality?

TUSK: I really don’t. Obviously, there are things like the [data breach] lawsuit that I’m not at all privy to, but I will say that he has really good political instincts. He understood when to fight and when to cut a deal. Frequently, when the lobbyists were telling us to say “yes” to a deal because it was easier for them, he knew when to say “no.” He also really understood his customers and the juxtaposition between Uber and taxis and how we can mobilize people and get them excited to use Uber.

From working with him, I found that he is tough and he can be a pain, but in terms of what I saw firsthand for several years…Some people will take terms like “aggressive” and turn it into “ruthless,” but in my experience, he’s the smartest client I’ve ever worked with in terms of understanding political dynamics.

How close are you with the company today?

TUSK: I have a lot of friends there because we went from running Uber’s government relations out of my conference room to building out a full team. But I don’t know CEO Dara [Khosrowshahi] at all, I’ve never met him. Travis is a friend of mine, I still talk to him all the time. I obviously want to see the company succeed because it’s in my interest, and I’m also proud of what we’ve built. He declined to speak on the record about his conversations with Kalanick.

What are your thoughts on Softbank’s tender offer of $32.96 per share? Do you think it will go up to be more in line with the $70 billion valuation?

TUSK: It’s a low blow. It’s obviously art and not science. I worry a little bit that the timing of the data breach story hit really close to the tender offer and might have served as an excuse to offer a lower price. The economics of the company are really strong and really bright, so I don’t know that at $33 a share, they’ll be able to fill their $8 billion [worth of Uber shares from existing investors]. I think they’re going have to come up, and if I had to guess, it ends up somewhere in the low $50s. I’ll take advantage of this tender offer at the right price.

You invested in Ripple and Coinbase. What can we expect in terms of regulation when it comes to crypto?

TUSK: Interestingly, I am pro-regulation in crypto. We actually want regulation here because you need to separate the good actors from the bad actors, you want a code of conduct, and you want to know the rules of engagement. Whether it will happen on a federal level or a state level remains to be seen. I think it’ll happen in different parts of the world in totally different ways because it’s such a global thing.

There are so many ways to make government more effective through blockchain by addressing pain points like voting or paying bills. Crypto is something that will need smart regulation, but blockchain is a tool that could make government a lot better.

This notion that Jamie Dimon has had that it’s all tulips and a Ponzi scheme — it’s just wrong to me. If you look at society broadly, there’s a massive vacuum of trust. No one trusts politicians, no one trusts organized religion, no one trusts the media, no one trusts banks. And people are saying, here’s another way to transact without requiring us to buy into systems that have failed us. Think about Venezuela and Argentina — places where people really don’t want their money in the local currency. The need for people’s trust to go somewhere combined with the technology, to me, means that crypto is not going away.

People who say that this is just some passing fad are typically part of the institutions who have lost the people’s trust and either refuse to recognize it or don’t understand it.

Based on all the companies you’ve advised and looked at in 2017, what are some emerging trends or key areas you think Term Sheet readers should be paying attention to?

TUSK: Bike sharing, scooter, e-bike trend. I find it particularly interesting because it’s a highly regulated thing. They could very well be the source of a lot of fights in the most number of jurisdictions in 2018.

Another trend is around gaming technology. On Monday, the Supreme Court will hear arguments on sports betting. If the court rules in favor of the state of New Jersey, you’ll see a massive chain reaction set off in state houses all over the country where each state will have the right to set its own policies on this. The FanDuels and the DraftKings of the world are in the best position to really take advantage of that.

TUSK: Things happen because you make them happen. One of the things about tech startups and politics is that ambitious people take a belief and run as aggressively as they can with it, asking for things they probably shouldn’t ask for, and trying to do things they probably shouldn’t try to do. They’ll fail a lot of times, but they also might succeed. I saw Bloomberg and Schumer do that in politics and Travis do it in tech. So not being afraid to fail and to try to do something even if you’re not inherently qualified to do it are two things that have been really helpful to me.