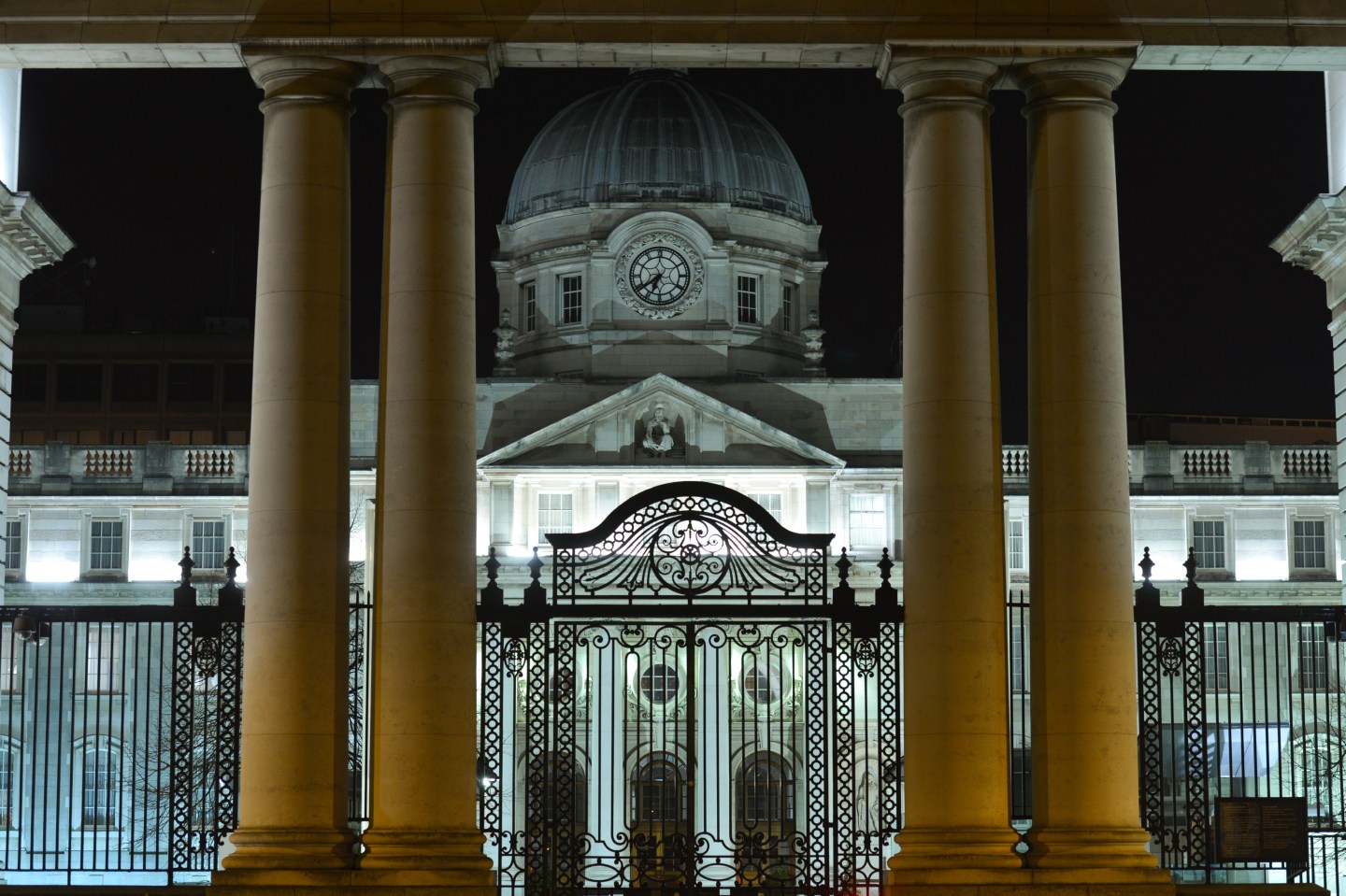 Government Buildings in Dublin on the weekend that could see the possible collapse of the Irish Government. Ireland's prime minister (Taoiseach) Leo Varadkar is adamant that deputy prime minister (Tanaiste) Frances Fitzgerald should not even consider quitting amid a furore that has brought his administration to the brink of collapse. In Dublin, Ireland, on Saturday, 25 November 2017. (Photo by Artur Widak/NurPhoto via Getty Images)
Artur Widak—NurPhoto/Getty Images

Ireland was on the verge of a snap election on Monday after the opposition party propping up the minority government said the deputy prime minister’s refusal to quit would force the country to the polls next month.

The political crisis that deepened dramatically late on Monday has left the country’s two main parties with less than 24 hours to head off a general election in a dispute that cast a shadow over a key Brexit summit next month.

Ireland will play a major role at the meeting, telling EU leaders whether it believes sufficient progress has been made on the future of the border between EU-member Ireland and the British province of Northern Ireland.

The pressure on Deputy Prime Minister Frances Fitzgerald of Varadkar’s Fine Gael party mounted on Monday following the release of fresh documents about her disputed handling of a police whistleblower who alleged corruption in the force.

Fianna Fail, whose backing Varadkar requires from the opposition benches to keep his government functioning, has said it will move a motion of no confidence in Fitzgerald at 2000 GMT on Tuesday unless she quits, a position that hardened on Monday.

“I think the Tanaiste (deputy prime minister) should recognize that unless she does stand aside, she is going to force this country into an election nobody wants, that nobody needs and is not in the country’s interests,” senior Fianna Fail MP Jim O’Callaghan told national broadcaster RTE.

“I don’t see any other method out of this.”

Varadkar has insisted that if the motion is not withdrawn, he will be forced to hold an election before Christmas, a prospect EU officials say would complicate the EU Brexit summit on Dec. 14-15.

A compromise had appeared possible earlier in the day when senior members of both parties struck a more conciliatory tone, but the momentum shifted instantly upon the release of the new documents.

Fitzgerald said last week that she did not recall receiving an email in May 2015 that detailed an attempt to discredit a police whistleblower whose allegations of widespread misconduct in the force cost her predecessor his job as justice minister.

The correspondence released on Monday showed Fitzgerald also received two more emails about the strategy in July 2015, but she resisted calls from all parties to resign, saying an ongoing a judge-led tribunal should judge her conduct in January.

A spokesman for Varadkar, who is due to meet Fianna Fail leader Micheal Martin again on Tuesday morning in a bid to avoid the election, said the government was standing by Fitzgerald.

However some Fine Gael members who spoke on condition of anonymity were livid, and local media reported that a number of the party’s ministers privately said she must step down.

While an opinion poll on Saturday gave Fine Gael a one-point lead over Fianna Fail and suggested another minority government as the most likely outcome, Dublin City University politics lecturer Eoin O’Malley said Monday’s events would also hurt them.

“Fine Gael would be going into the election where they are seen to be the belligerent party, probably seen to be the one that caused it. It … could be a career-ending election for the loser,” O’Malley said, adding that an election was inevitable unless Fitzgerald quit.

The crisis has erupted at a particularly sensitive point in the Brexit talks.

Foreign Minister Simon Coveney, who continued to support Fitzgerald, reiterated on Monday that not enough progress had been made on the border issue and that he had the full backing of all members states on the EU’s negotiating side.

“We are in the process in the context of Brexit negotiations of ensuring that we influence what are going to be historic decisions for this country… The last thing we need right now is an election in the middle of all that,” he told RTE.

The border is one of three issues Brussels wants broadly resolved before it decides whether to move Brexit talks on to a second phase about trade, as Britain wants, and the Irish crisis steadied sterling on Monday, after it posted its biggest weekly rise in more than a month.

“The next couple of months are crucial for the future of Ireland,” said Kevin O’Rourke, professor of Economic History at Oxford University, who has written extensively on Ireland’s role in the Brexit talks.

“Provoking an election right now would be utterly irresponsible.”