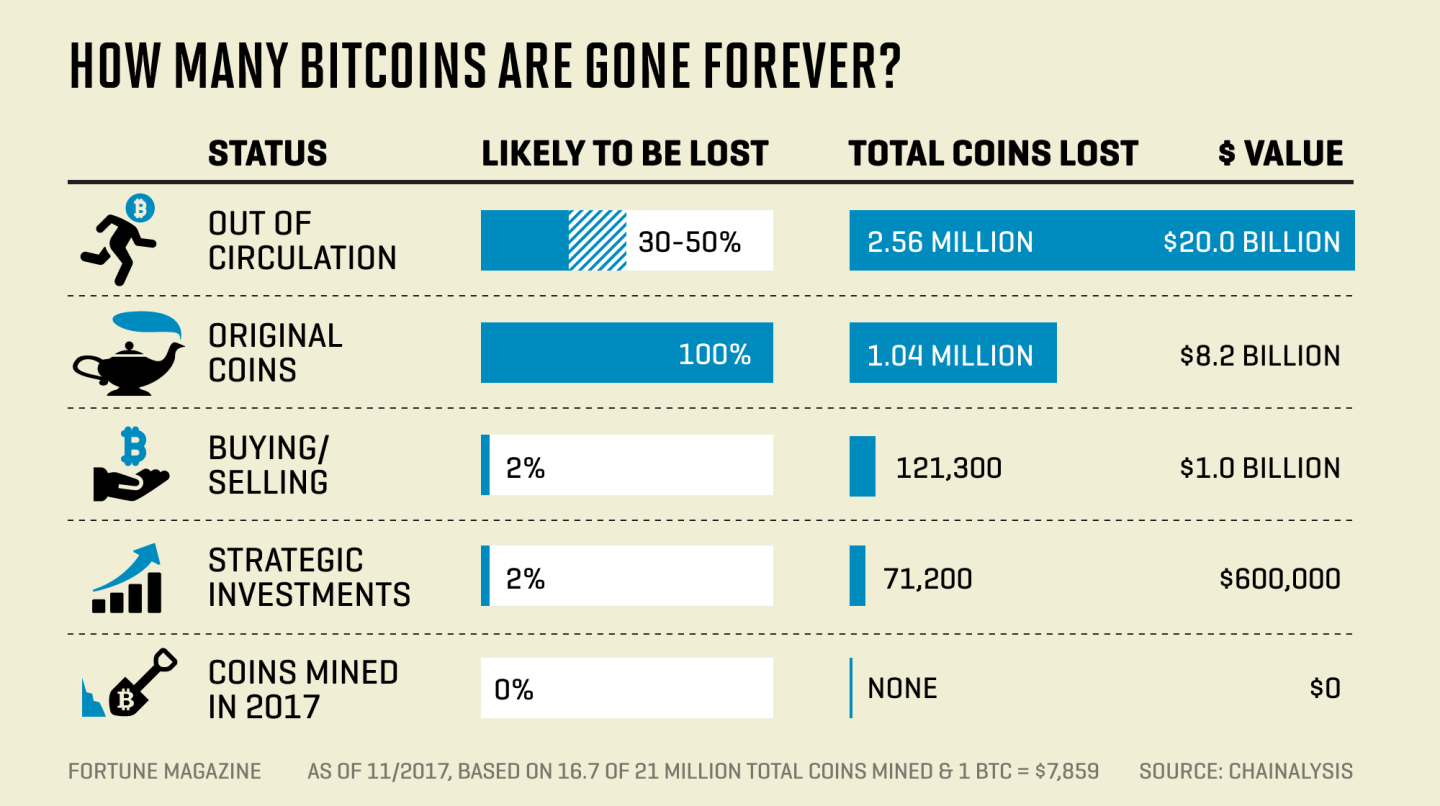 Just as gold bars are lost at sea or $100 bills can burn, bitcoins can disappear from the Internet forever. When all 21 million bitcoins are mined by the year 2040, the actual amount available to trade or spend will be significantly lower.

According to new research from Chainalysis, a digital forensics firm that studies the bitcoin blockchain, 3.79 million bitcoins are already gone for good based on a high estimate—and 2.78 million based on a low one. Those numbers imply 17% to 23% of existing bitcoins, which are today worth around $8,500 each, are lost.

While others have speculated about the number of lost bitcoins, the Chainalysis findings are significant because they rely on a detailed empirical analysis of the blockchain, where all bitcoin transactions are recorded.

As the graphic above shows, Chainalysis’s conclusions rely on segmenting the existing bitcoin supply based on age and transaction activity. For some segments, the company used statistical sampling to determine the amount lost.

The segment “Mined Coins” reflects bitcoins mined in 2017 (which are presumed not to be lost), while “transactional” refers to those that have moved or spent in the last year—very few of which are lost. Likewise, the category of “Strategic Investors,” who have held their bitcoins for 1-2 years represent a very small share of the losses.

Here’s the data in another format, which shows how “Out of circulation” bitcoins—those mined 2-7 years ago and belonging to long-time investors known as “hodlers”—and those from the early days of bitcoin in 2009 and 2010 account for the vast majority of the lost coins:

These figures reflect bitcoins that are truly lost, and not hacked or otherwise stolen—in these cases, of course, the bitcoin is not lost since the thief has control of them.

Note the numbers above are based on the high estimate, and that the low estimate, which is based on only a 30% loss in “hodler” coins, puts the number of lost bitcoins at 2,767,468. Also, both estimates make a critical assumption that coins belonging to bitcoin’s inventor, Satoshi, are gone for good (more on that below).

In the future, more bitcoins will be lost. But the rate at which they disappear will be much lower than in the past since, now that they’re so valuable, people will be more vigilant about keeping track of them (unlike this poor fellow out who threw away a hard drive with the key to 7,500 bitcoins). Meanwhile, there is a question of whether the Chainalysis findings mean bitcoin is more scarce than people assume—or if the market has already priced the missing coins into the currency’s current value.

“That is a very complex question. On the one hand, direct calculations about market cap do not take lost coins into consideration. Considering how highly speculative this field is, those market cap calculations may make it into economic models of the market that impact spending activity,” said Kim Grauer, Senior Economist at Chainalysis. “Yet the market has adapted to the actual demand and supply available – just look at exchange behavior. Furthermore, it is well known monetary policy procedure to lower or increase fiat reserves to impact exchange rates. So the answer is yes and no.”

Lost Bitcoins and the Secret of Satoshi

Chainalysis, whose clients include the IRS and Europol, has made a name for itself in the bitcoin world because of its abundant data and sophisticated study of blockchain wallets. Law enforcement agencies rely on the company to provide detailed insights into who owns the currency and how it moves around.

Chainalysis’s overall methodology is confidential, but a spokesperson shared certain details about how the company assesses which bitcoins are lost. An important clue comes when there is a “fork” in the blockchain, such as the one this summer which led to the creation of a bitcoin clone known as Bitcoin Cash. Such events can lead to the owners of wallets that have been inactive for years to conduct a transaction, providing an opportunity for statistical analysis.

These sort of clues help inform the Chainalysis figure for the “hodler” category—wallets belonging to people who got into bitcoin before it hit the big time, and which represent the biggest source of uncertainty as to whether bitcoins are lost or just being hoarded.

As for the 2% of “‘transactional” bitcoins that Chainalysis determined to be gone, the company says this is based on scraping the Internet for reports of lost coins. It added that the estimate of such losses, which can arise from a misdirected transaction or the loss of a private key through death or carelessness, is not based on statistical extrapolation and will be refined further in coming years.

Finally, there’s the question of what became of the bitcoins belonging to Satoshi, the pseudonymous creator of the crypto-currency, who has not been not been heard from since 2011. Chainalysis says wallets associated with Satoshi represent about 1 million bitcoins (the company will provide a more specific figure later this year), and that its model assumes that those coins—which date from a time when it was easy to mine 50 bitcoin with a laptop—are gone forever. This assumption is a big one and, if it proves to be incorrect, the number of circulating bitcoins could suddenly increase significantly and deliver a shock to the market.

Fortune asked Chainalysis about what was most surprising about the lost bitcoin findings.

“Firstly, we floated our findings to a few people and they all had different reactions about how surprising the figure was. But what I found most surprising/interesting was how when you unpack what it means to be “lost” things get even more confusing.” Grauer said.

The Ledger is Fortune’s focus on the intersection of tech and finance. For more coverage, click here.

An earlier version of this story attributed the quotes to Chainalysis co-founder Jonathan Levin.