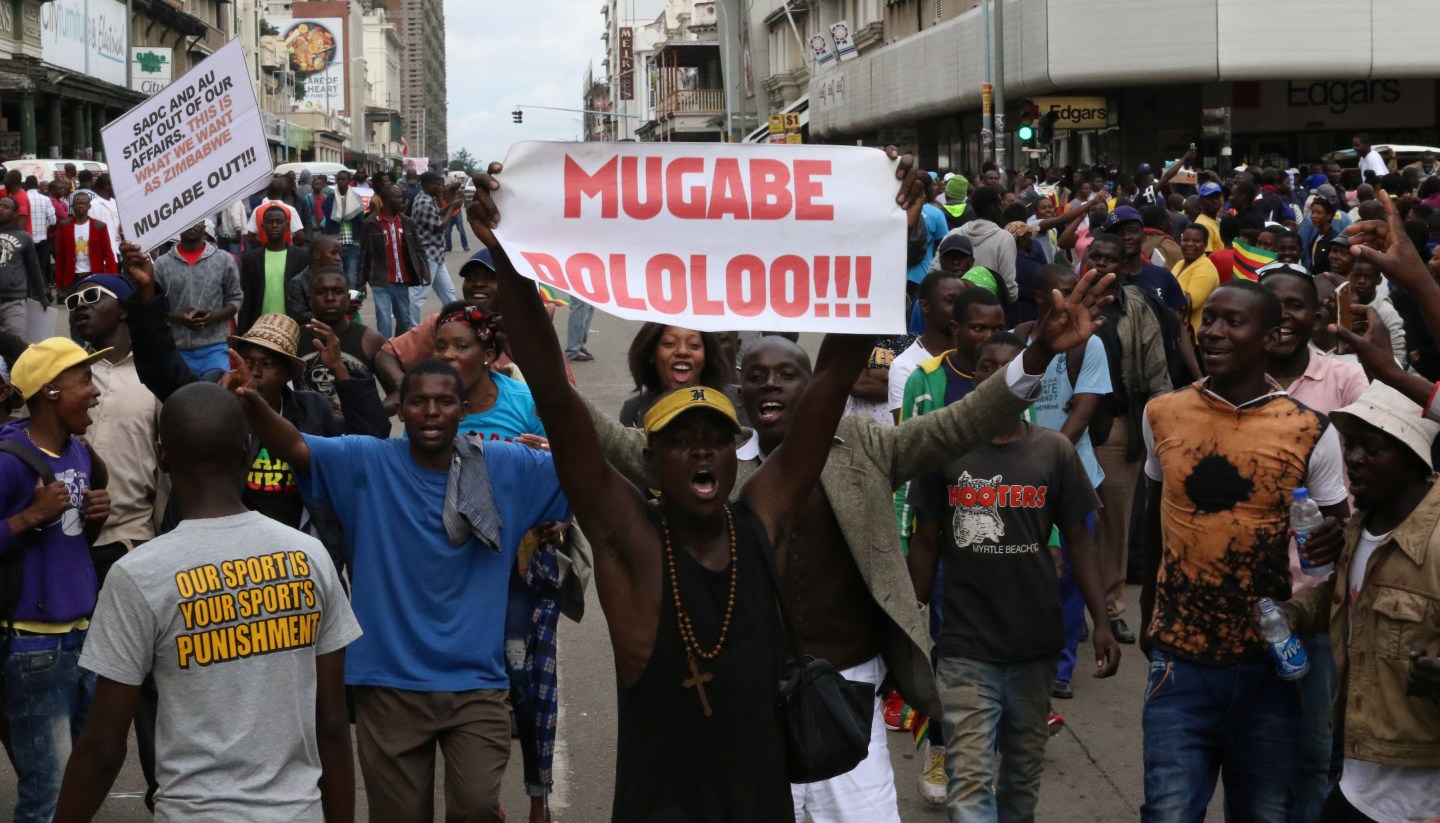 (HARARE, Zimbabwe) — Zimbabwe’s ruling party fired Robert Mugabe as its leader on Sunday and gave the 93-year-old less than 24 hours to quit as head of state or face impeachment, an attempt to force a peaceful end to his 37 years in power after a de facto coup.

Mugabe, the only leader the southern African nation has known since independence from Britain in 1980, was replaced by Emmerson Mnangagwa, the deputy he sacked this month in a move that triggered Tuesday’s intervention by the army.

In scenes unthinkable just a week ago, the announcement was met by cheers from the 200 delegates packed into ZANU-PF’s Harare headquarters to seal the fate of Mugabe, whose support has crumbled in the four days since the army seized power.

Mugabe was given until noon (1000 GMT) on Monday to resign or face impeachment, an ignominious end to the career of the “Grand Old Man” of African politics who was once feted across the continent as an anti-colonial liberation hero.

Even in the West, he was renowned in his early years as the “Thinking Man’s Guerrilla”, an ironic nickname for a man who would later proudly declare he held a “degree in violence”.

As the economy crumbled and political opposition to his rule grew in the late 1990s, Mugabe showed his true colours, seizing thousands of white-owned farms, detaining opponents and unleashing security forces to crush dissent.

As the vote was announced, war veterans leader Chris Mutsvangwa, who has spearheaded an 18-month campaign to remove a man he openly described as a “dictator”, embraced colleagues and shouted: “The President is gone. Long live the new President.”

Mugabe’s 52-year-old wife Grace, who had harboured ambitions of succeeding her husband, was also expelled from the party, along with at least three cabinet ministers who had formed the backbone of her ‘G40’ political faction.

Speaking before the meeting, Mutsvangwa said Mugabe, who has so far resisted calls to quit, was running out of time to negotiate his departure and should leave the country while he could.

“He’s trying to bargain for a dignified exit,” he said.

If Mugabe refused to go, “We will bring back the crowds and they will do their business,” Mutsvangwa told reporters.

Mnangagwa, a former state security chief known as “The Crocodile,” is expected to head an interim post-Mugabe unity government that will focus on rebuilding ties with the outside world and stabilising an economy in freefall.

On Saturday, hundreds of thousands of people flooded the streets of Harare, singing, dancing and hugging soldiers in an outpouring of elation at Mugabe’s expected overthrow.

His stunning downfall is likely to send shockwaves across Africa, where a number of entrenched strongmen, from Uganda’s Yoweri Museveni to Democratic Republic of Congo’s Joseph Kabila, are facing mounting pressure to quit.

On Saturday, men, women and children ran alongside the armoured cars and troops who stepped in to target what the army called “criminals” in Mugabe’s inner circle.

Meanwhile, the man himself remained under house arrest in his lavish ‘Blue Roof’ compound, watching the support from his party, security services and people evaporate.

Speaking from a secret location in South Africa, his nephew, Patrick Zhuwao, told Reuters Mugabe and his wife were “ready to die for what is correct” rather than step down in order to legitimise what he described as a coup.

Zhuwao, who was also sanctioned by ZANU-PF, did not answer his phone on Sunday.

On Harare’s streets, few seemed to care about the legal niceties as they heralded a “second liberation” and spoke of their dreams for political and economic change after two decades of deepening repression and hardship.

More than 3 million Zimbabweans – around 20 percent of the population – have emigrated to neighbouring South Africa in search of a better life.

The huge crowds in Harare have given a quasi-democratic veneer to the army’s intervention, backing its assertion that it is merely effecting a constitutional transfer of power, rather than a plain coup, which would entail a diplomatic backlash.

Despite the euphoria, some Mugabe opponents are uneasy about the prominent role played by the military, and fear Zimbabwe might be swapping one army-backed autocrat for another, rather than allowing the people to choose their next leader.

“The real danger of the current situation is that having got their new preferred candidate into State House, the military will want to keep him or her there, no matter what the electorate wills,” former education minister David Coltart said.

The United States, a longtime Mugabe critic, said it was looking forward to a new era in Zimbabwe, while President Ian Khama of neighbouring Botswana said Mugabe had no diplomatic support in the region and should resign at once.

Besides changing its leadership, ZANU-PF said it wanted to change the constitution to reduce the power of the president, a possible sign of its desire to move towards a more pluralistic and inclusive political system.