Marriott’s Latest New York Hotel Is for the Airbnb Generation 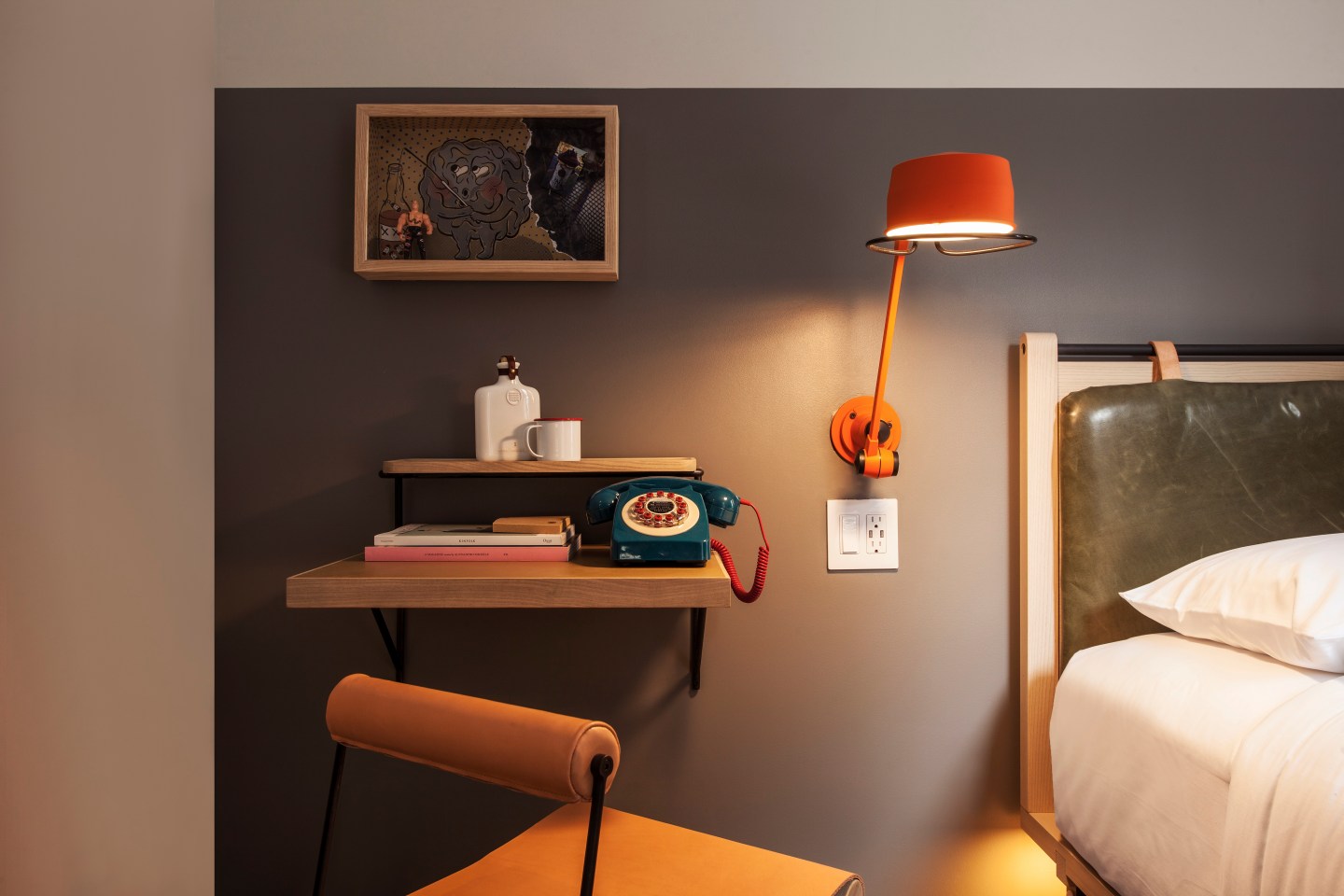 Marriott doesn’t call them millennials, it calls them millennial-minded, customers that could be any age but appreciate the touches designed for those inscrutable twenty and 30somethings. Whatever you call them, the latest big launch in the Marriott empire, the 612-room Moxy Times Square, is a temple to them: tiny rooms that invoke shipboard living, with modular furniture that hangs on pegs on the wall and unique configurations including 4 bunk beds in a 220 square foot space. (The inspiration for the design firm, Yabu Pushelberg, was “urban camping”). Extra touches include a rooftop bar with mini golf and nineteen 120-square-foot, $99 “crash pads” bookable from the cocktail menu on demand (or, shall we say, in the moment). In town for the launch, Marriott International CEO Arne Sorenson sat down with Fortune to talk Moxy, the administration’s impact on U.S. tourism, Airbnb, and his recent nomination to the Microsoft board. The following interview has been edited for brevity and clarity.

Fortune: What was the thinking in creating Moxy?

Sorenson: About five years we started talking to a European partner about a lifestyle economy product. And I personally sort of discouraged it, because economy means low rates, traditionally, and it’s hard to make much money off of them. And they don’t necessarily do a lot for your brand perception. But they were relentless, we thought, okay, well what if we totally reinvented the space and did something that has a non-budget feel to it? So much of the low end stuff in Europe basically tells you you didn’t pay much for your room, so don’t expect a lot. And we can come up with something different. We were initially focused on Europe. And then, as with a number of things, we had U.S. franchisees take a look, and we thought, you know what? This is sort of internal disruption, if you will. Let’s come up with something which is really on the edge of different. And I think it’s going to have a really powerful global application.

How do you make it feel non-budget while keeping the costs down?

Good design and great public space. The ages will be across the board, but I think [the target customer] is somebody that is looking for a little bit of fun. They are interested in that public space and that space being turned on. And if you entered through a place which is turned on and fun and feels alive and not cheap, it will flavor the way you think about the room. Now of course the room too has got features which are small square footage but features which are really pretty interesting.

Is part of this–the technology, the design, the hipness–intended to compete with Airbnb?

With everything we do, we’re hopefully competing with other providers of lodging. This isn’t necessarily particularly focused on Airbnb. We started it with the European piece, and before Airbnb was really quite the topic that it is today. But I do think it serves as something that is quite distinct. I think one thing that Airbnb missed, particularly in its first generation of [product], is you don’t have public space, you don’t have a place to go and get together, and you’ve got a real hit and miss proposition on what the rooms product is like. One place Airbnb does compete is offering pretty affordable stays. But here we can offer something that offers a great room and good value and then kill it with the public space and a place to gather and have a good time.

The hotel industry has stepped up the lobbying effort against Airbnb this year. Are you making progress there, and do you think Airbnb has become more willing to make concessions or cooperate with regulators?

I don’t know that I see that they’re more willing to concede. They’re spending a lot of money on government affairs and they’re playing pretty aggressive. I’ve had letters from Airbnb directly, demanding my response about some charge, I don’t even know what it is, within hours. That’s pretty aggressive, and I’m not going to respond to that. I think what’s happening in cities and states is they are saying, of course the rules ought to be level. You’re now talking about a company which is broadly reported to have $30 billion dollars in valuation and is having an impact in local residential markets. And cities basically say we better understand what this dynamic is and both say that taxes should be paid and there should be some sets of rules that apply to it. But also say, ‘don’t we want to somehow know what volume is going to come through here and basically know that these are units that are approved?’ As opposed to a back door where a whole bunch of residential properties disappear out of what are already very tight residential markets, making the residences that much less affordable for folks and pushing people further out in the suburbs and doing all sorts of things. So I think we are making progress. But I think in many respects we’re making progress because it’s the right set of policies.

One of the concerns in the hotel industry in the past couple of years has been the oversupply, in particular in New York. Is that a concern, for Marriott and for the new Moxy?

New York has had about 5% supply growth year after year for five or six years. So you’ve had a market that has grown by 25-30%. It’s a market that has had too little supply, if you think about how expensive New York is and how full it is. All things considered, New York is still performing at really great levels. But I think we are losing share when it comes to international demand in the U.S., and I think that’s [having] an impact in New York and the other great inbound markets. We’re seeing more of the global travel buying going to Europe and greater markets in Asia, and staying away from the United States.

The rest of the world sees [the U.S. administration’s] comments as being: “You’re really not welcome to the United States.”

When did you start seeing the impact of that?

It probably started first with the Mexicans right after the election, for obvious reasons concerning the rhetoric about Mexico. Certainly by the time you’re into February with the very focused language on NAFTA, there is a strong sense in Mexico that ‘we better be cautious,’ and inbound visits from Mexico falls very quickly. You get the Muslim travel ban that comes fairly quickly too. And while it focused on countries that don’t really drive much volume to the United States, the language around it, and the fact of it itself, is heard in many countries around the world as again a sign of something other than welcome.

Are there actual numbers on the impact?

It’s not crystal clear yet. But it looks like we may be losing what I would guess is a few million visitors to the United States this year. Last year we had probably about 75 million visitors from all foreign countries, including Mexico and Canada. Maybe we’ll lose two or three [million] this year. But they spend, on average, $5,000 a person. So [the impact] builds, up whether it’s jobs that are created here or something else.

Have you been in touch with the administration about this? And what is the response?

Yes. Both through industry platforms and directly. I haven’t talked to President Trump about this, I’ve never met President Trump. But what cabinet members and others have said is, ‘We don’t necessarily understand why the rest of the world hears our comments that way. Why is it?’ And my response is, it really doesn’t matter whether they’re misinterpreting it or not, that’s the way they’re taking it, and that it’s reasonably clear.

And I have said, and the industry has said, clearly we need secure borders, and it’s perfectly appropriate that we have some discussion around immigration and being sure we know what the policy is. But you can talk about those things and at the same time say, ‘if you intend us no harm, we’d love to have you come visit. You’re welcome. We are wide open for you.’ And there are things that can be done to enhance security that actually make it easier for most travelers to come.

But we do need to make sure we use words that are welcoming. Why aren’t we? I’m speculating because there’s not really an answer here, but it’s got to be about domestic politics. And the audience for many of the words that are interpreted in this way abroad is a domestic audience, not a foreign audience. And they must view those words as being helpful to the domestic political agenda.

You were just nominated to the board of Microsoft. How did that come to be and what do you think you’re going to bring to the team?

Well, Microsoft is a great company. And I have been obnoxiously picky about boards. I was on the Walmart board until I became the CEO of Marriott in 2012. And then for time reasons, I got off that board to try and figure out how to be a CEO. I haven’t necessarily totally accomplished that. But there have been plenty of calls that have come in. And I basically aid you know, I want to do something which I can contribute to, but I also something I can learn from, and the technology space is the space that’s always been most interesting to me. Microsoft is obviously an iconic company. Satya’s done an extraordinary job.

Had you met him before?

I had met him I think at an Obama state dinner or maybe once or twice before. I didn’t know him real well. But they reached out, and I said yes.