The Iron Maiden Guide To Staying Relevant In Business 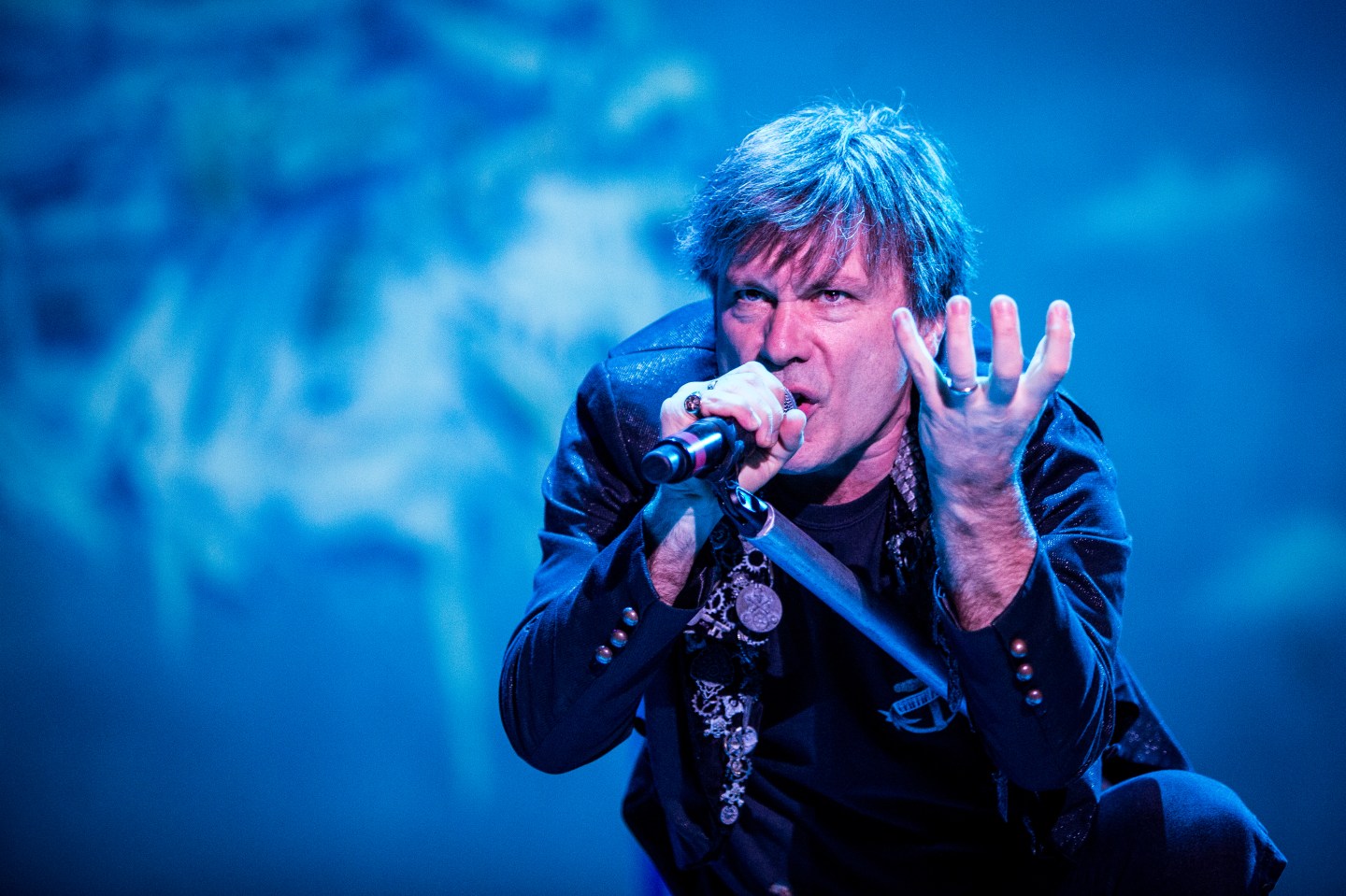 While equipped with an operatic voice that has been compared to an air raid siren and the ability to command arenas full of rabid fans to sing every word along with him, Dickinson has achieved enormous success in many of his other pursuits. On top of heading a band that has headlined sold-out global tours since 1982 and sold tens of millions of albums, Dickinson is also a pilot licensed to fly large commercial aircraft, a former competitive fencer, and an entrepreneur with stakes in businesses ranging from a microbrewery (with 18 million pints sold thus far) to a pilot training service to airplane maintenance. He’s also been a long time radio host, penned two novels, written a screenplay, and has become a fixture on the corporate speakers circuit, giving talks to employees at such companies as Boeing.

A far cry from the cliché of the barely coherent, rock airhead popularized by the movie Spinal Tap, and frankly, embodied by some of his peers in heavy metaldom.

In an autobiography released this week by HarperCollins’ Dey Street imprint, “What Does This Button Do?”, Dickinson eschews mainstays of such rock chronicles. He shares no tales of rock star braggadocio and debauchery (save for one time when his stage manager was nearly finished, um, entertaining a groupie in a hot tub and therefore too busy to answer Dickinson’s question about a stage backdrop.) Nor does he use his book to settle scores (with the exception of a couple of gentle swipes at Maiden founder, leader and bassist Steve Harris with whom he had some big battles early on.) And there is almost no mention of wife and kids or of his private life at all, something the notoriously celebrity-averse singer uses the book’s afterword to explain would have been “overkill.”

Instead, readers will learn about what got the man who went from 666 (“The Number of the Beast”) into the cockpit of a 747, and the creative salvation that came from his solo albums during a six-year break from the band (1993-99) that allowed for his ultimate return to Maiden. You will also discover that the paragon of headbanging had to stop the signature heavy metal move because of the neck problems it caused.

Long time Maiden fans won’t be surprised that this rocker has gravitas. After all, Maiden once wrote a 13 minute 41 seconds song about Samuel Taylor Coleridge’s “The Rime of the Ancient Mariner.” The band’s most recent record, the double-album “Book of Souls” is, as Dickinson has explained, a cautionary tale about empires that rise then fall. No odes to drunken bacchanals with bikini-clad women for this metal band.

Dickinson, who had a difficult childhood in which he faced aloof parents and intense bullying, pins his peripatetic nature on a desire for constant reinvention. “You are never so alive as when you are learning something new and overcoming adversity,” he writes in his book.

That’s not to say Dickinson is all earnestness. He recounts starting a mini-feud with hard rock peers Metallica a few years ago when he said Maiden was superior, writing that the salvo came from Maiden’s need “to be outsiders again” after a hiatus.

However much Dickinson disdains bands trading on nostalgia or reality show fame (he famously feuded with Ozzy Osbourne’s wife in 2005 after he slammed reality TV, a medium that made the Osbournes mainstream stars) or selling out, Maiden has been deft in its marketing and branding, using its living-dead mascot Eddie on all of its album covers and merchandise. (The plane Dickinson had chartered for Iron Maiden’s recent tours was dubbed “Ed Force One” in a nod to Eddie.)

This approach has held the band in good stead over the 36 years Dickinson has been part of it. (He joined the band on its third album.) In the United States, the band has never had a multi-platinum album, according to the Record Industry Association of America. And yet on its most recent U.S. tour, it was grossing $1 million a night, according to Pollstar, making it one of the biggest draws among its 1980s rock peers, including bands whose top albums sold far more than Maiden’s best-sellers. The band’s two-year tour for “Book of Souls” took it to the four corners (on Ed Force One, of course) of the world, with multi-night stints in key markets like New York, and sold out shows everywhere, from Brazil to the Czech Republic to Japan. That long standing success comes from staying focused on what it does best, a lesson many large companies can learn from.

Dickinson spoke this week with Fortune about his book and his career. The interview has been condensed and edited for clarity and length.

What is the secret to Iron Maiden’s longevity?

Everyone wants to know what the secret is. The secret is hiding in plain sight. With Iron Maiden, the secret is we treat our fans well and we do it with integrity but we don’t pander to them. We accept that they’re along for a journey when they follow Iron Maiden. Some people say, “You don’t have your own reality TV show, so how could you have possibly done this?” I say we don’t need a reality TV show because we are the reality to our audience because we turn up.

Many of your 80s rock peers are touring, playing a largely greatest hits set, while a third of Iron Maiden’s set on the recently ended “Book of Souls” tour came from that album. Why?

If you take advantage of them (fans) as in you serve up the same old thing every single tour, you can expect some of them to walk away. That is just a band becoming a karaoke band. If you’re not doing new music why bother? We don’t share the idea that going and doing stadiums, playing 30-year-old songs, is a success. It’s just making money.

What about fans who don’t want you to play anything but the 1980s classics?

When you left Iron Maiden in 1993 for six years, had you started to feel stifled by fans’ intense expectations or jaded by the music business?

I started to feel that way. There is always a fine line between reliability and complacency. In the early days, when a band is starting out, everything is fierce, everything is new and you’re forever trying to play David and Goliath with the music industry. As you get your niche, that’s when the temptation sets in to become less self critical than you should be.

You’re now 59, and your bandmates are all in that range, yet still touring the world comprehensively, playing four shows a week. How are you adapting?

We all play a little bit smarter than we did. We’ve matured in our interpersonal relationships so we can talk more freely about we need and what we don’t need. And we’ve taken more control of the workload because frankly in the 1980s we were working on such a schedule that given the type of music that we play, it’s virtually impossible to do 100% every single night.

You should able to play absolutely at your peak and in fact that’s what people expect from us now. So we have the confidence, and the audience behind us now, to say yeah, this is the schedule were going to do.

You’ve now been back in Iron Maiden for 18 years, far longer than the first time around. Why has it held this time?

In your middle age, you’ve emerged as quite an entrepreneur. Do you, like other entrepreneurs, have to draw up business plans and have a 90-second pitch at the ready, or does being Bruce Dickinson spare you from that?

Nothing’s different because I’m Bruce Dickinson. It’s exactly the same as every other entrepreneur. There are some things that I do that are more hands-on. Some things have a more creative aspect and I let the management team get on with it, but I have a lot involvement in marketing and product development for items like beer.

What advice do you have for other business people?

Never send an e-mail when you’ve had a few beers. And when you write a really, really shitty e-mail which you think is incredibly scathing and says exactly how you really feel about somebody, something or a situation, stop, read it and delete it. It applies across the board.

If Iron Maiden were just starting out now in the current music industry environment, could it have had the success and career it has?

Probably not, because put simply, simply the entire marketplace for new music is so fragmented and there are so many tiny little niches, so it’s almost impossible to gain traction, particularly for a rock group.