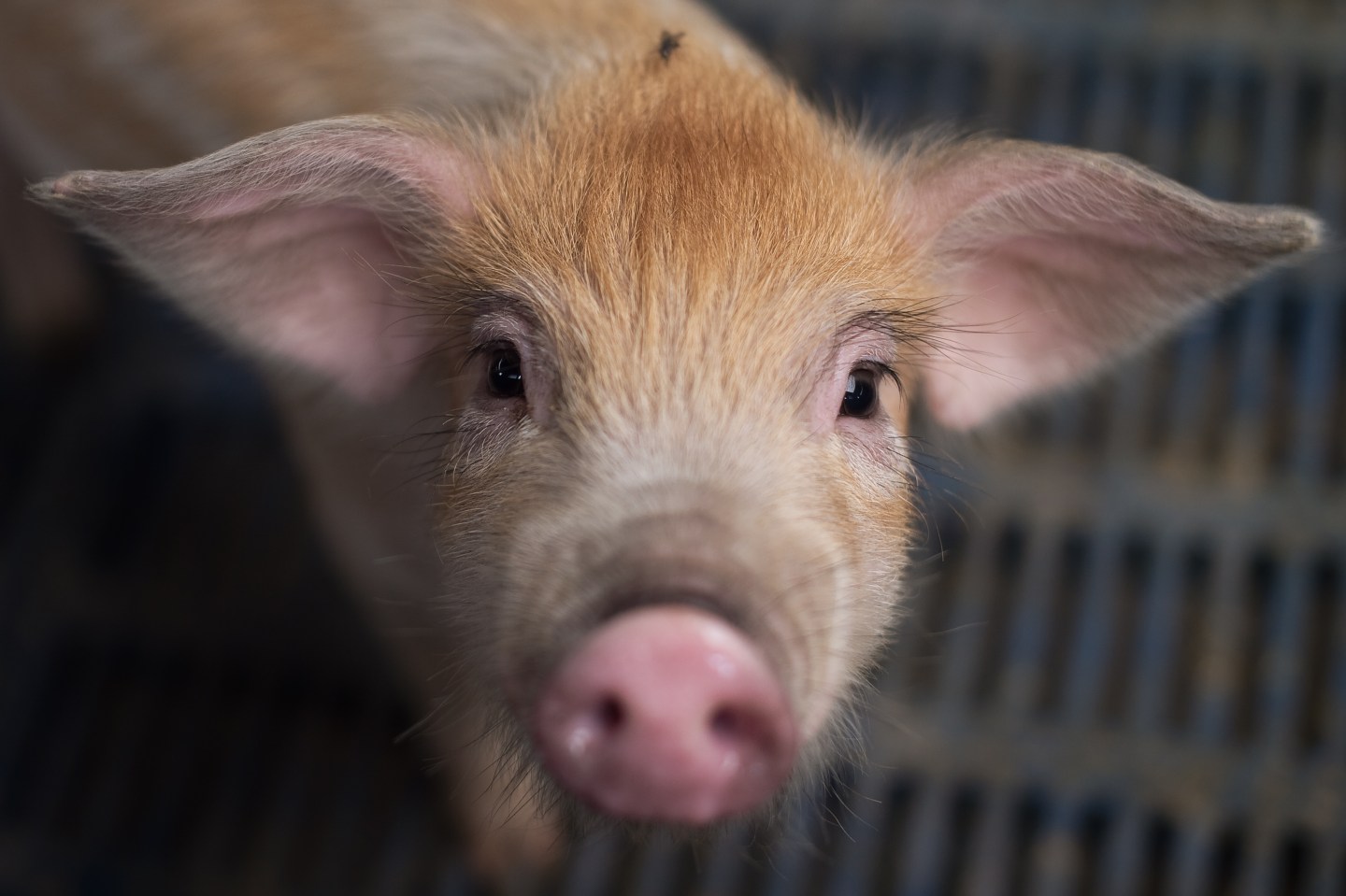 In this picture taken on June 5, 2017 a piglet is seen at a pig farm on the outskirts of Beijing. Millions of backyard pig farmers in China are being forced out of the industry as the government cracks down on pollution and encourages producers to expand their operations with the aim of modernizing the industry and smoothing out fluctuations in prices and supply. / AFP PHOTO / NICOLAS ASFOURI / TO GO WITH: China-agriculture-economy-pork, FOCUS by Allison JACKSON (Photo credit should read NICOLAS ASFOURI/AFP/Getty Images)
NICOLAS ASFOURI AFP/Getty Images

There’s been a one-two punch of significant developments in the brave new world of CRISPR gene editing this week—and one of them potentially includes the saddening/encouraging prospect of less fatty bacon and pork products sometime in the future (depending on whether you’re deferring to your taste buds or your arteries, respectively).

Let’s get the bacon-centric news out of the way first. All right, so technically, this particular milestone isn’t about bacon. In fact, it’s about giving newborn and young piglets a better chance of surviving by making it easier for them to withstand shock from cold (something they are not particularly good at doing because of a genetic quirk). Scientists at the University of Chinese Academy of Sciences in Beijing were able to leverage the gene editing technique known as CRISPR Cas-9—in essence, molecular shears that can be targeted to slice and dice certain DNA segments and let them be replaced by other genetic sequences—to restore a gene called uncoupling protein 1 (UCP1) in pigs. This gene, which allows for a more efficient way to turn fat into energy and heat, was replicated from mice and put into pig embryos.

The result? Piglets with a 20 percent lower fat to weight ratio and a better ability to generate heat in cold temperatures. So it’s actually for a good cause—giving piglets, which have a higher tendency of dying from cold shock, a better shot at life. And if you’re worried about a future filled with skinny, less scrumptious pork segments, just remember: Food from engineered animals is such a controversial topic in America that it literally took the Food and Drug Administration (FDA) decades before approving the first genetically modified animal in 2015.

That brings us to the second development, which could have significantly more far-reaching scientific and medical repercussions down the line. Cas9 is just one type of enzyme that can be used in the CRISPR gene-editing process; but there are other ways to approach CRISPR gene modification—including one called “base editing” that’s described in two papers published in Nature and Science by researchers from the Broad Institute of MIT and Harvard on Wednesday.

As the MIT Technology Review notes, this system could almost be thought of as CRISPR 2.0. The scientists were able to actually change existing, individual DNA components (the base pairs of the human genome are A-T and C-G, representing the four molecular building blocks which make up life and determine everything from how we look to whether we carry certain devastating illnesses) into other ones. They transformed an “A” (which stands for adenine) into something that resembled a “G” (or guanine).

The net result of this chemical impostor’s presence? The original “T” (or thymine) paired with the now-transformed “A” also changed so that the molecular pair transformed into a cytosine-guanine (C-G) base pair. That’s a very different kind of milestone compared to CRISPR, which is more of a molecular set of shears to cut out and replace entire base pairs. Instead, this kind of base editing tool could be used to very precisely target individual, or “point,” mutations at the root of many genetic diseases.