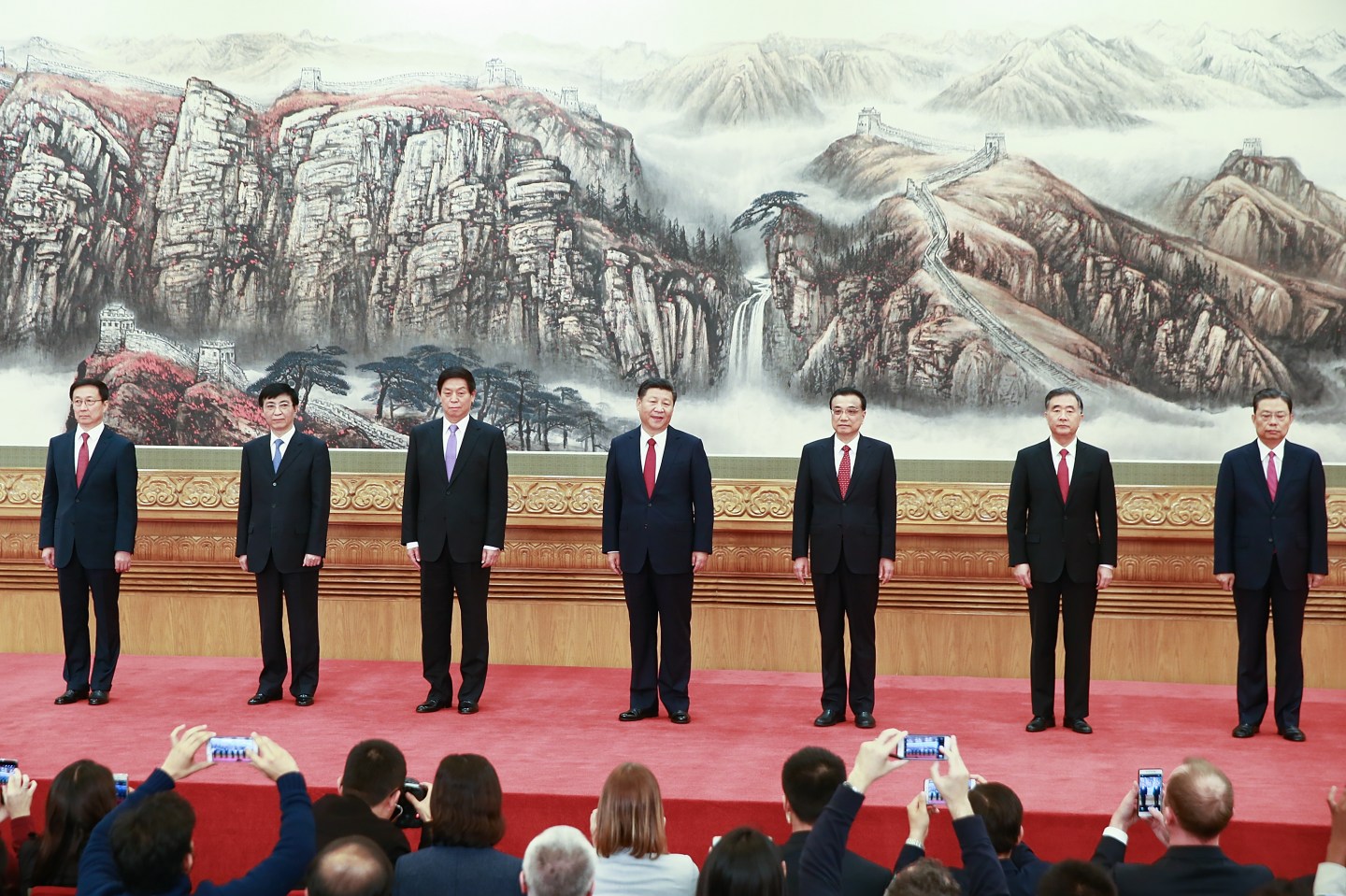 China’s ruling Communist Party broke with recent precedent Wednesday and revealed a new leadership line-up without a clear successor to President Xi Jinping, who has become arguably the most powerful Chinese leader since Mao Zedong.

Apart from Xi, Premier Li Keqiang was the only one to retain his spot amid sweeping changes on the Politburo Standing Committee. There is now speculation Xi could seek to stay on in some capacity beyond the end of his second term in 2022.

All seven Standing Committee members are in their 60s and, for the first time, no member was born before the 1949 Communist revolution.

The make-up of the committee, which has ultimate control over the world’s second-largest economy, appeared to be a compromise to include a broad range of voices from party elites.

The committee includes one person known to be very close to Xi – Li Zhanshu. Li, who often accompanies Xi on overseas trips, was named the third-ranked member, meaning he will most likely assume the role of head of the largely rubber-stamp parliament. That will not be confirmed until parliament meets in March.

Xi had already strengthened his hand considerably ahead of the announcement, with his political theory and “Belt and Road” infrastructure-led development strategy put into the party constitution. He was named the party’s “core” last year.

Read: Xi Jinping Just Got Himself a Special Place in His Party’s Constitution

Damien Ma, fellow and associate director at U.S. think-tank the Paulson Institute, said the outcome may not have been entirely what Xi wanted but that he had to balance things out.

“I do think that Xi made more of a power play to get his thought into the party charter – and also OBOR (One Belt, One Road) and being the ‘core’ – and didn’t necessarily spend all his political capital to elevate everyone he wanted,” Ma said.

Xi himself made no mention of who his successor might be as he introduced his new Standing Committee in a large room in Beijing’s Great Hall of the People, an event shown live around the country.

He did not take questions from the assembled media but said the party had weathered trials and tribulations.

“These experiences have taught us that peace is precious and development must be valued,” Xi said.

“We will also work with other nations to build a global community with a shared future, and make new and greater contributions to the noble cause of peace and development for all humanity,” he said.

Guangdong party secretary Hu Chunhua and Chongqing party boss Chen Miner had been previously seen as prominent contenders to succeed Xi among the party’s so-called sixth generation of leaders but were not included in the Standing Committee.

Instead, both were named to the wider 25-member Politburo, a rung below the Standing Committee.

Xi and Li were first promoted to the Standing Committee at the 17th Party Congress in 2007, in a clear signal that the pair would succeed Hu Jintao and Wen Jiabao and occupy the top two offices – which they did five years later.

But Sun Zhengcai, another sixth-generation contender, was abruptly removed from his post as Chongqing party secretary in July, signalling the likelihood that Xi would delay naming a successor and adding to speculation that he could still be around in some capacity after 2022.

Zhao Leji, the head of the party’s Organisation Department, which oversees personnel decisions, replaced Wang Qishan as head of the Central Commission for Discipline Inspection after being named to the anti-graft body on Tuesday.

Vice Premier Wang Yang will likely head parliament’s high-profile but largely ceremonial advisory body, while Wang Huning will likely be in charge of ideology and propaganda.

Shanghai party chief Han Zheng rounds out the list, the most junior of the seven.

A new Central Military Commission was also announced, reduced from 11 members to seven, as had been expected.

Xu Qiliang stayed on as one of its two vice chairmen, while Zhang Youxia, who is close to Xi, was named its other vice chairman and also assumes a position on the Politburo, as previously reported by Reuters.