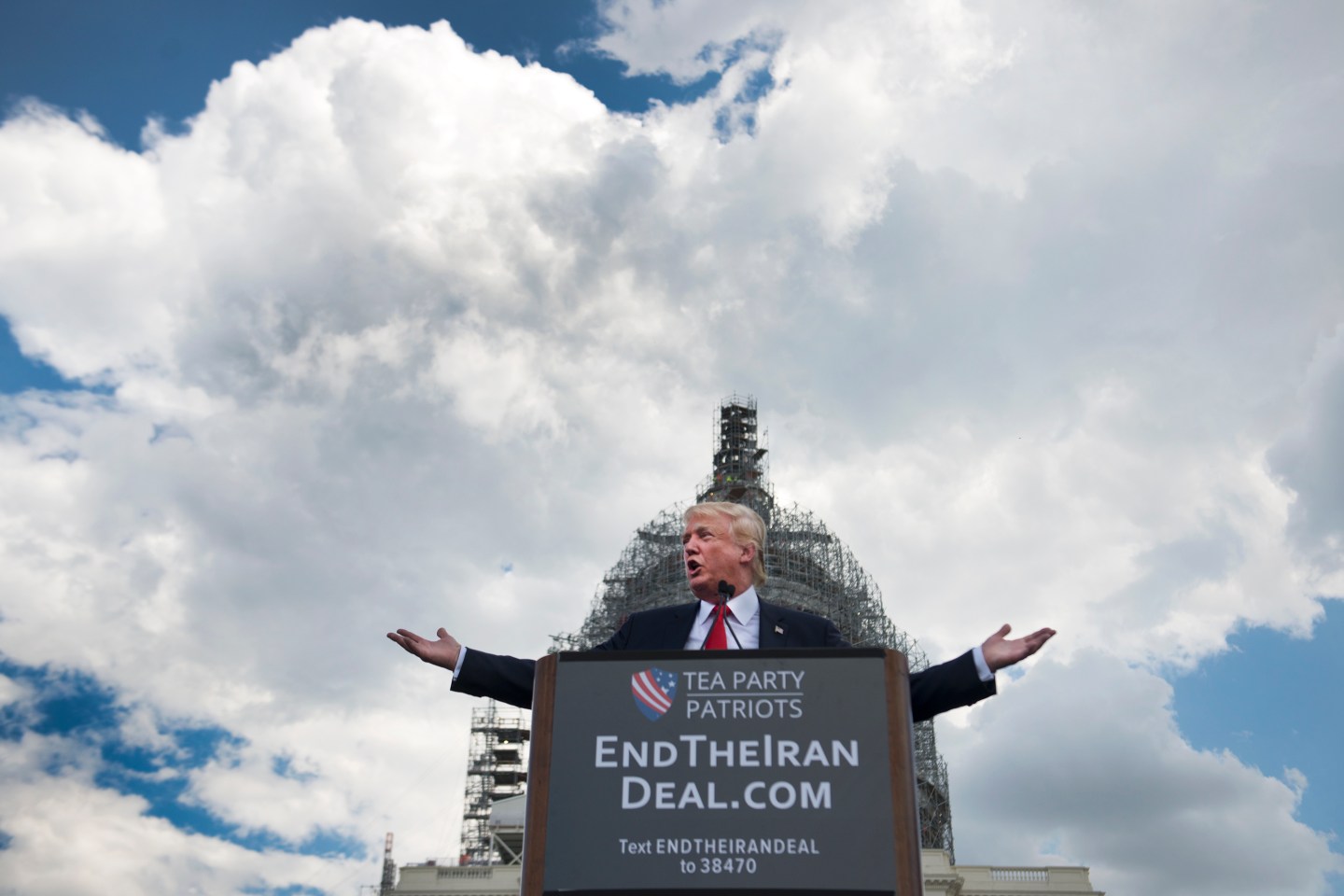 President Donald Trump is expected to announce soon that he will decertify the landmark international deal to curb Iran’s nuclear program, a senior administration official said on Thursday, in a step that potentially could cause the 2015 accord to unravel.

The official, speaking on condition of anonymity, said Trump is also expected to roll out a broader U.S. strategy on Iran that would be more confrontational. The Trump administration has frequently criticized Iran’s conduct in the Middle East.

Trump, who has called the pact an “embarrassment” and “the worst deal ever negotiated,” has been weighing whether it serves U.S. security interests as he faces an Oct. 15 deadline for certifying that Iran is complying with its terms.

“We must not allow Iran … to obtain nuclear weapons,” Trump said during a meeting with military leaders at the White House on Thursday, adding:

“The Iranian regime supports terrorism and exports violence, bloodshed and chaos across the Middle East. That is why we must put an end to Iran’s continued aggression and nuclear ambitions. They have not lived up to the spirit of their agreement.”

Asked about his decision on whether to certify the landmark deal, Trump said: “You’ll be hearing about Iran very shortly.”

Supporters say its collapse could trigger a regional arms race and worsen Middle East tensions, while opponents say it went too far in easing sanctions without requiring that Iran end its nuclear program permanently.

Iranian authorities have repeatedly said Tehran would not be the first to violate the accord, under which Iran agreed to restrict its nuclear program in return for lifting most international sanctions that had crippled its economy.

If Trump declines to certify Iran’s compliance, U.S. congressional leaders would have 60 days to decide whether to reimpose sanctions on Tehran suspended under the agreement.

Whether Congress would be willing to reimpose sanctions is far from clear. While Republicans, and some Democrats, opposed the deal when it was approved in 2015, there is little obvious appetite in Congress for dealing with the Iran issue now.

The prospect that Washington could renege on the pact, which was signed by the United States, Britain, France, Germany, Russia, China, the European Union and Iran, has worried some of the U.S. allies that helped negotiate it.

French President Emmanuel Macron said last month there was no alternative to the nuclear accord, formally known as the Joint Comprehensive Plan of Action (JCPOA).

A senior Iranian diplomat told Reuters on Thursday the end result of Trump’s expected move would be to isolate the United States since the Europeans would continue to support it.

“Many foreign investors told us that they will not be scared away from Iran’s market if Trump de-certifies the deal,” the diplomat said.

The administration was considering Oct. 12 for Trump to give a speech on Iran but no final decision had been made, an official said previously.

Israeli Prime Minister Benjamin Netanyahu, a close ally of Trump, last month said that unless provisions in the accord removing restrictions on Iran’s nuclear program over time are eliminated, it should be canceled.

“Fix it, or nix it,” Netanyahu said in a speech at the U.N. General Assembly annual gathering of world leaders on Sept. 19.

Many of Trump’s fellow Republicans who control Congress also have been critical of the deal.

Trump blasted the deal in his speech to the U.N. General Assembly, also on Sept. 19.

“We cannot abide by an agreement if it provides cover for the eventual construction of a nuclear program,” Trump said, adding that Iran’s government “masks a corrupt dictatorship behind the false guise of a democracy.”

Trump is weighing a strategy that could allow more aggressive U.S. responses to Iran’s forces, its Shi’ite Muslim proxies in Iraq and Syria and its support for militant groups.

Trump’s defense secretary, Jim Mattis, told a congressional hearing on Tuesday that Iran was “fundamentally” in compliance with the agreement. He also said the United States should consider staying in the deal unless it were proven that Tehran was not abiding by it or that it was not in the U.S. national interest to do so.

When Mattis was asked by a senator whether he thought staying in the deal was in the U.S. national security interest, he replied: “Yes, senator, I do.”

A State Department official said the Trump administration was “fully committed to addressing the totality of Iranian threats and malign activities and seeks to bring about a change in the Iranian regime’s behavior.”

The move also would represent another step by Trump that would undo key parts of Obama’s legacy.

If Trump moves to decertify the accord, it would mark another example of walking away from international commitments as he pursues his nationalist “America First” agenda. He previously announced plans to abandon the Paris climate accord and the ambitious 12-nation Trans-Pacific Partnership (TPP) trade deal, two key Obama achievements.