Free trade, the Iran nuclear deal, and the limits of American power 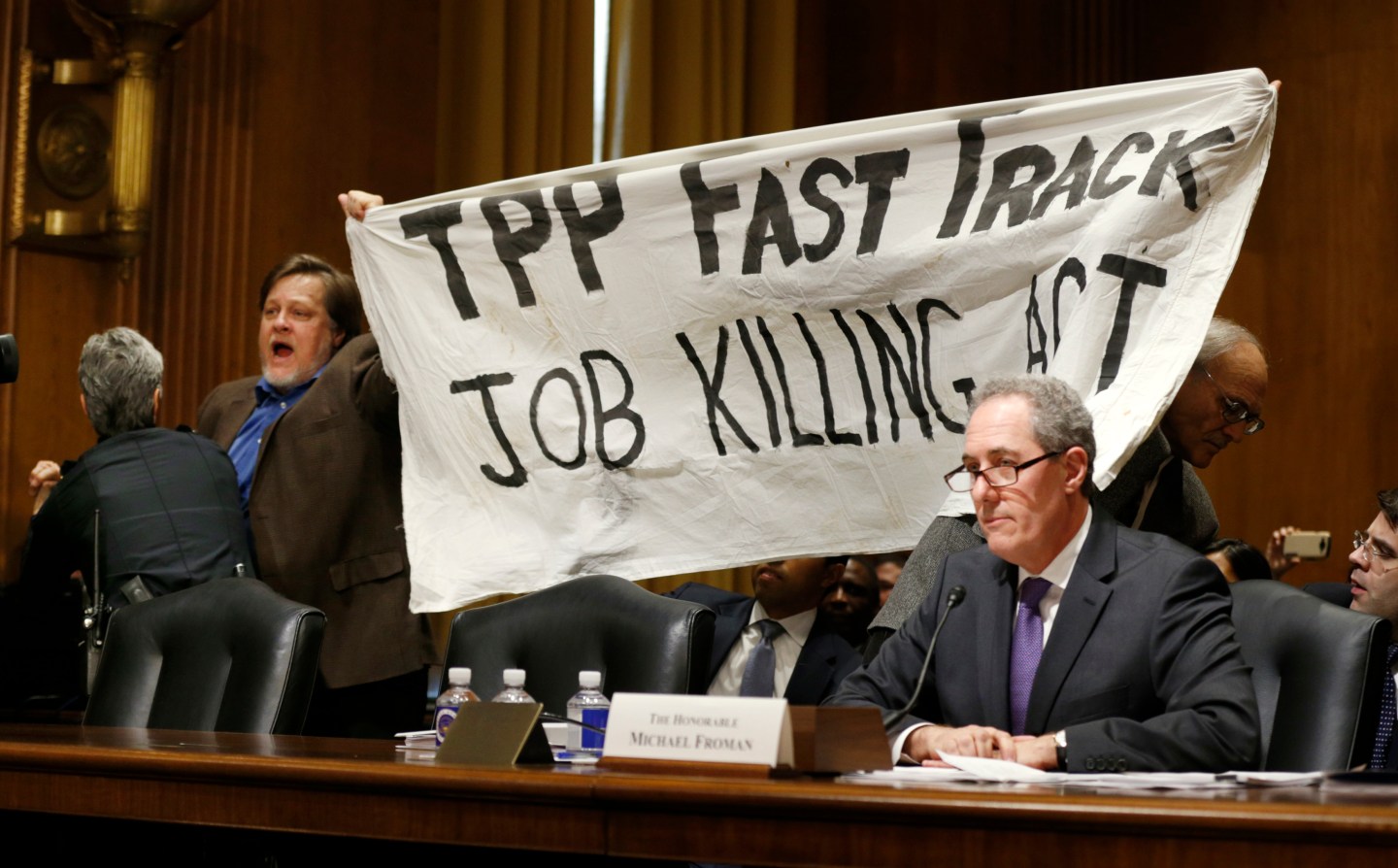 President Obama has nearly two years remaining in office, but it’s safe to say his most significant economic achievements are behind him.

As most presidents do as they approach lame-duck status, Obama has shifted his focus to the international stage, where he has more flexibility to act without the assent of Congress. There is, however, one area where domestic economic policy and international affairs intersect, and that is in his administration’s negotiations of the Trans-Pacific Partnership, a free trade agreement between the United States and 11 other Pacific powers, ranging from Japan to Mexico to Malaysia.

Free trade has long been thought of as a key issue that could bring the President and his Republican adversaries together. Congressional Democrats account for the largest cohort of opponents to the Trade Promotion Authority, which should give the Obama Administration more wiggle room to negotiate an agreement and force Congress to vote up or down on the final product without making amendments.

It’s been the labor movement and its allies in Congress that have been leading the charge against the Trans-Pacific Partnership. Labor is convinced that the free trade deals the U.S. has struck over the past generation have been a disaster for American workers, who are increasingly forced to compete with workers abroad who don’t benefit from the same standards as Americans, like minimum wages and workplace safety regulations. Critics point to the effects of the North American Free Trade Agreement, which helped cause the trade deficit between U.S. and Mexico to soar, costing what economist Robert Scott estimates is more than 600,000 American jobs.

Advocates of free trade deals have argued that the U.S. has learned from the mistakes it made during the NAFTA negotiations, and free trade deals it has struck since the year 2000 have done much more to insist on high standards for labor laws. The pro-free-trade think tank Third Way recently estimated that post-2000 deals have largely shrunk trade deficits and therefore added jobs.

In the face of left-leaning criticism of free trade deals, President Obama and others have argued that the horse is already out of the barn as far as globalization is concerned. Even absent free trade agreements, technological and geopolitical developments–like the embrace of capitalism by China–would have led to job loss and stagnant wage growth here at home. It does us no good to stubbornly resist changes occurring around us, as that would simply allow China to “write the rules” for the next century of international trade, as the President put it in his State of the Union Address.

This week, Third Way was back with another analysis that backs up this line of argument. It looked at the 13 free trade deals that China has signed since 2000, finding that eight of them made no mention of labor standards whatsoever, and the remaining five made fleeting mentions that fall far short of what the U.S. has pushed for in recent agreements.

To that critics have argued that it doesn’t matter what sort of labor standards are in the agreement (and few actually know what standards are within the Trans-Pacific Partnership since negotiations are being done in secret) unless there is true enforcement of those standards. They have little confidence that a mechanism of enforcement will be set up or that future administrations will use that mechanism to penalize countries with cheap labor.

There’s something farcical about these arguments because, the people doing the arguing don’t actually know what’s going to be in the deal. Rumor has it that the Trans-Pacific Partnership will have minimum wage requirements, though all but one TPP country already has a minimum wage, guaranteed collective bargaining rights, and a limit on hours worked per week. On the other hand, there’s something very familiar about these arguments too. They are following the same pattern as the noise surrounding negotiations over Iran’s nuclear program and the easing of international sanctions.

In both instances, the United States is trying to mold a process that is mostly out of its control. On the one hand, we are dealing with the effects of globalization; on the other, the nuclear ambitions of a powerful and populous nation halfway around the world. The fact that the international community has a terrible record of preventing nations determined to develop nuclear capabilities has not stopped hawks here in America and elsewhere from lambasting the Obama Administration’s efforts to put together an agreement with Iran that gives the West a little more leverage in the process. And despite the evidence that globalization is a process that is not primarily the result of United States policy, labor leaders are intent on blaming the woes of their constituency on free trade deals.

But if you’re worried that idealism and naivete will derail a free trade deal that will surely benefit U.S. corporations (at the very least), it’s good to keep in mind that those who are fighting for the American working class have no other strategy but to make as much noise as possible about the deal until it is ultimately signed. If the Obama Administration thinks there’s a chance that the signature achievement of its final years will be derailed by organized labor, it’s going to fight that much harder for better labor protections.