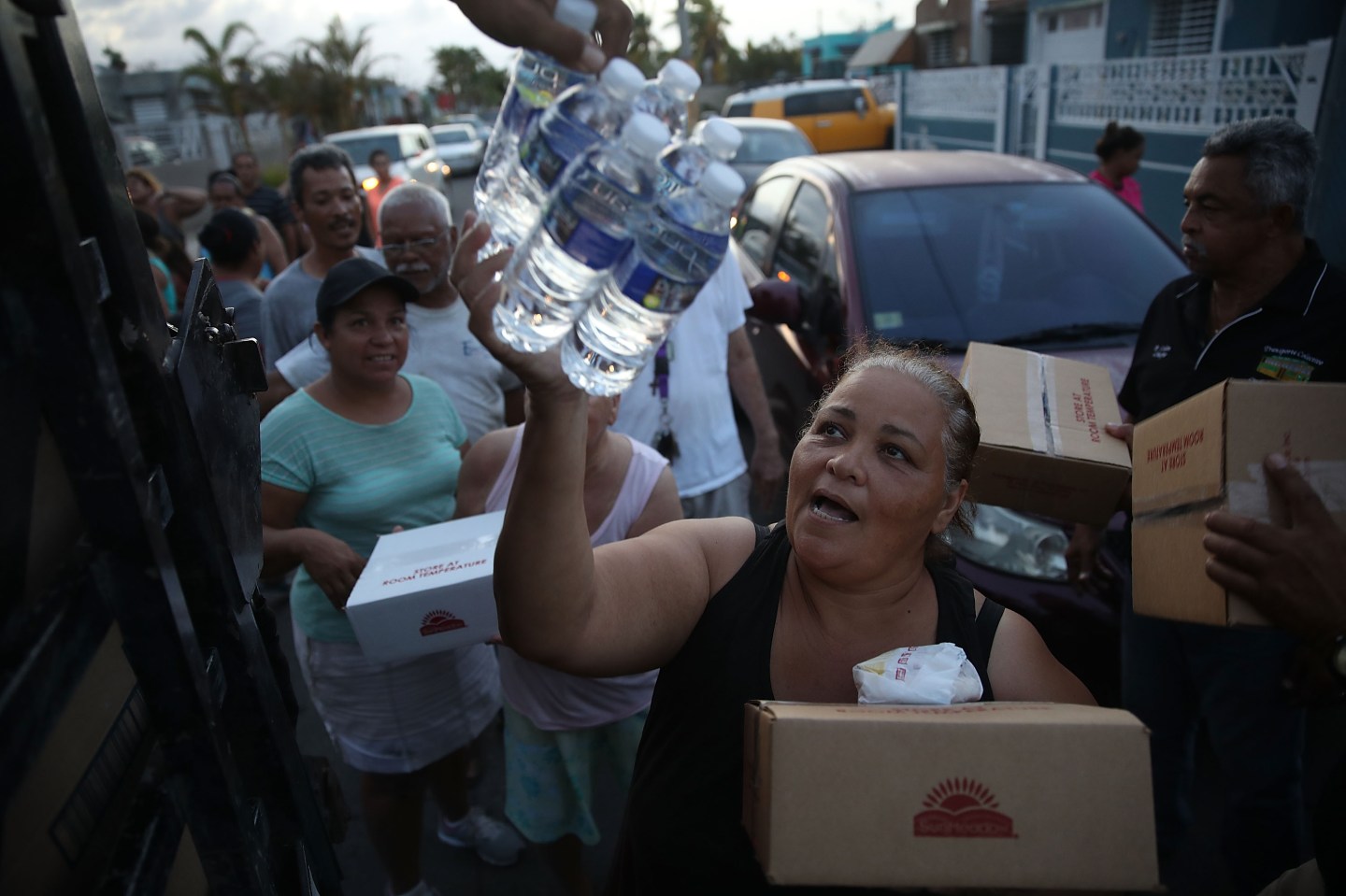 Hurricane survivors receive food and water being given out by volunteers and municipal police as they deal with the aftermath of Hurricane Maria on September 28, 2017 in Toa Baja, Puerto Rico.
Joe Raedle Getty Images

“You know, they owe a lot of money to your friends on Wall Street, and we’re going to have to wipe that out,” Trump said on Fox Tuesday. “You can say goodbye to that. I don’t know if it’s Goldman Sachs, but whoever it is, you can wave goodbye to that.”

While that would be a weight off Puerto Rico’s chest — the commonwealth has increased taxes among others in order to pay back its creditors — Trump’s comments sent Wall Street into a frenzy.

Investors already on edge about Puerto Rico’s ability to pay back its debts sent the island’s general obligation bonds yielding 8% down by nearly 20% Wednesday. Though experts opined such a move was unlikely with Mick Mulvaney, director of the Office of Management and Budget later trying to soothe markets by saying Puerto Rico “is going to have to figure out how to fix the errors that it’s made,” investors remained spooked.

Granted, Trump’s comments Tuesday would have merely piled onto a growing stack of woes for Puerto Rico and its bondholders. Puerto Rico heavily financed its expansion via debts in the early 2000s as companies began setting up offices on the island. But after tax break for U.S. companies in Puerto Rico expired in 2006, jobs and citizens left the island, pushing the commonwealth into an economic recession. With a weakened economy Puerto Rico unable to pay its now sizable debts. Finally in May, Puerto Rico filed a form of bankruptcy, with a turnaround plan that offered to pay $800 million a year to the island’s creditors — about 25 cents on the dollar.

Now Puerto Rico’s bondholders are growing increasingly certain that their returns could go even lower with Hurricane Maria in the mix. Bondholders rely on the island’s revenues, whether they comes from taxes or the commonwealth’s government-owned electrical grid, to be paid back. But the island revenue has been hard hit by Hurricane Maria. Two weeks after the storm, about 95% of Puerto Ricans are without electricity, while 55% have no access to drinking water, according to a recent update from the Department of Defense. Maria has effectively put a freeze on production. Meanwhile its government has focused funds toward recovery efforts.

“Puerto Rico was already intending to pay their lenders last, and, after the storm, ‘last’ is now even further down the line,” Matt Fabian of Municipal Market Analytics said in an email.

But despite Trump’s expectation that Puerto Rico’s creditors are Wall Street giants such as Goldman Sachs, some of Puerto Rico’s debt is in fact owned by individual investors via their mutual funds — and even Puerto Ricans themselves.

The government of Puerto Rico in 2016 commissioned a study that estimated Puerto Ricans held some $10 billion to $15 billion as investments via mutual funds and more, likely in preparation for retirement.

That means if the unlikely happens and Puerto Rico’s debts are forgiven, even if the island’s economic future looks several degrees brighter, some of its citizens’ retirement accounts may suffer. But more importantly and beyond that theoretical scenario, Puerto Ricans’ retirement accounts are likely to suffer as it stands, as the country puts debt repayment on pause and directs any extra funds toward rebuilding the island.

The biggest worry for Puerto Rico’s economic health and by extension, some of its citizens retirement portfolios, is how quickly the island can be back up and running. If current conditions continue, it’s likely that Puerto Ricans will continue exiting the island—raising the question of who will be left to keep its economy running after its been rebuilt?

“The biggest risk for Puerto Rico and the creditors is that the rebuilding of basic infrastructure takes so long that the out-migration worsens, and you see people put roots down in other places,” said Jim Millstein, CEO of financial advisory firm Millstein & Co. Millstein recently advised Puerto Rico on managing its debt.

So far, the emigration is already happening. An estimated 7,000 people have already left via the Luis Munoz Marin International Airport, with “tens of thousands more” likely to follow, a recent Municipal Market Analytics note read. But on a more optimistic note, investors such as John Mousseau, the director of fixed income at Cumberland Advisors, says he waiting for financial aid from the federal government to help rebuild and strengthen Puerto Rico’s economy.

“If you get this rebuilding underway, you start seeing Puerto Rico turning the other way,” he told Fortune in late September.