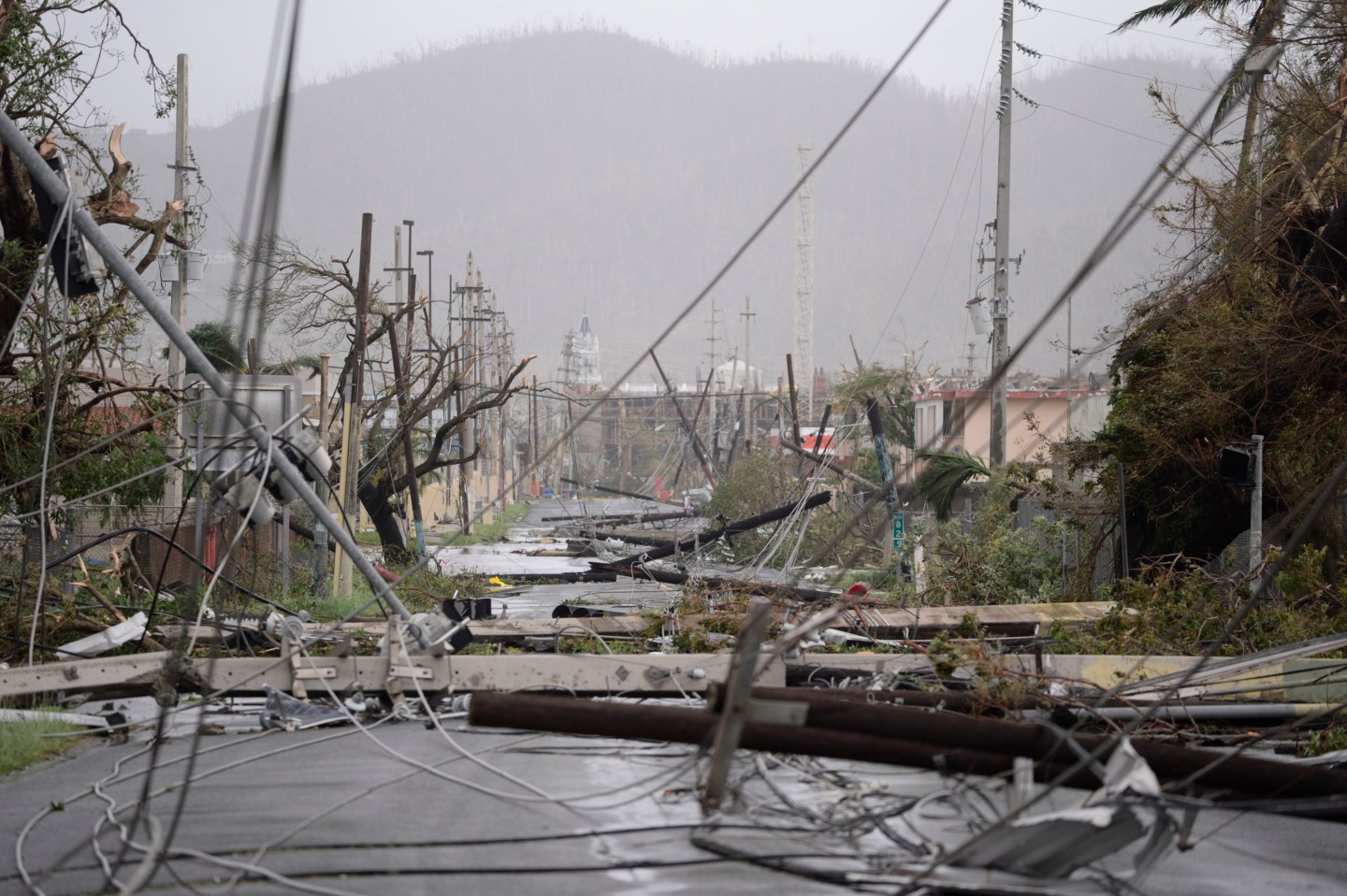 Electricity poles and lines lay toppled on the road after Hurricane Maria hit the eastern region of the island, in Humacao, Puerto Rico, Wednesday, Sept. 20, 2017. The strongest hurricane to hit Puerto Rico in more than 80 years destroyed hundreds of homes, knocked out power across the entire island and turned some streets into raging rivers in an onslaught that could plunge the U.S. territory deeper into financial crisis. (AP Photo/Carlos Giusti)
Carlos Giusti—AP

(SAN JUAN, Puerto Rico,) – U.S. President Donald Trump blamed Puerto Ricans on Saturday for failing to do enough to dig out from damage caused by Hurricane Maria, saying criticism leveled at his government for the slow response was driven by politics.

Ten days after the devastating storm wiped out power and communications systems, more than half of the 3.4 million people who live on the island do not have access to drinking water, and 95 percent remain without power, the Pentagon said.

Trump, who was spending the weekend at his private golf club in Bedminster, New Jersey, fired off a series of angry tweets early on Saturday complaining that media coverage of the suffering was unfair, and took aim at the mayor of San Juan, the island’s largest city.

“Such poor leadership by the Mayor of San Juan and others in Puerto Rico who are not able to get their workers to help,” said Trump, who is slated to visit the island on Tuesday. “They want everything to be done for them when it should be a community effort.”

Maria, the most powerful storm to strike Puerto Rico in nearly 90 years, has destroyed roads, making it difficult to get food, water and fuel around the island. The hurricane has killed at least 16 people, according to the official death toll.

Cruz, who has been living in a shelter after her home was destroyed in the hurricane, said municipal employees were working as hard as they could. She also said her complaints had resulted in more food and water being provided.

“Actually, I was asking for help – I wasn’t saying anything nasty about the president,” Cruz said on MSNBC. “I am not going to be distracted by small comments, by politics, by petty issues.”

“The tweets this morning are despicable, are deplorable, are not statesman-like at all,” said New York City Council Speaker Melissa Mark-Viverito, a Democrat born in Puerto Rico.

“He needs to be in charge, he needs to take control, he needs to demonstrate some level of empathy over what is happening,” Mark-Viverito said on CNN.

Trump was scheduled to speak by telephone to the governor of Puerto Rico, Ricardo Rossello, and other officials from the region on Saturday. U.S. Vice President Mike Pence visited the Federal Emergency Management Agency’s headquarters in Washington for a briefing.

At a news conference, Rossello declined to comment on Trump’s tweets, which he said he had not seen.

“Let me stress this: I am committed to collaborating with everybody,” he said. “This is a point where we can’t look at small differences and establish differences based on politics.”

The Trump administration has given Puerto Rico’s government “whatever we ask for” in the immediate aftermath of the hurricane, Rossello said. But he warned that the U.S. Congress would need to help rebuild the island, which is home to 3.4 million Americans.

“If Congress doesn’t take action with a significant package, then we are looking at a possible humanitarian crisis,” he said. “What are the effects of falling into that predicament? Massive exodus without a doubt.”

The insurance industry has begun to tally the mounting costs of Maria, with one modeling company estimating that claims could total as much as $85 billion. Puerto Rico has incurred most of the damage.

Police officers, firefighters and National Guardsmen loaned by other states were beginning to arrive to help local officials, Rossello said.

The U.S. business community was rallying to donate cash, with more than $24 million donated to relief charities as of Friday, said Marc DeCourcey of the U.S. Chamber of Commerce Foundation.

“Things don’t seem to be getting better,” Berkan, a lawyer, said in a text message.

“Although there are great moments of solidarity on the ground here, you can also see that patience is growing thin.”