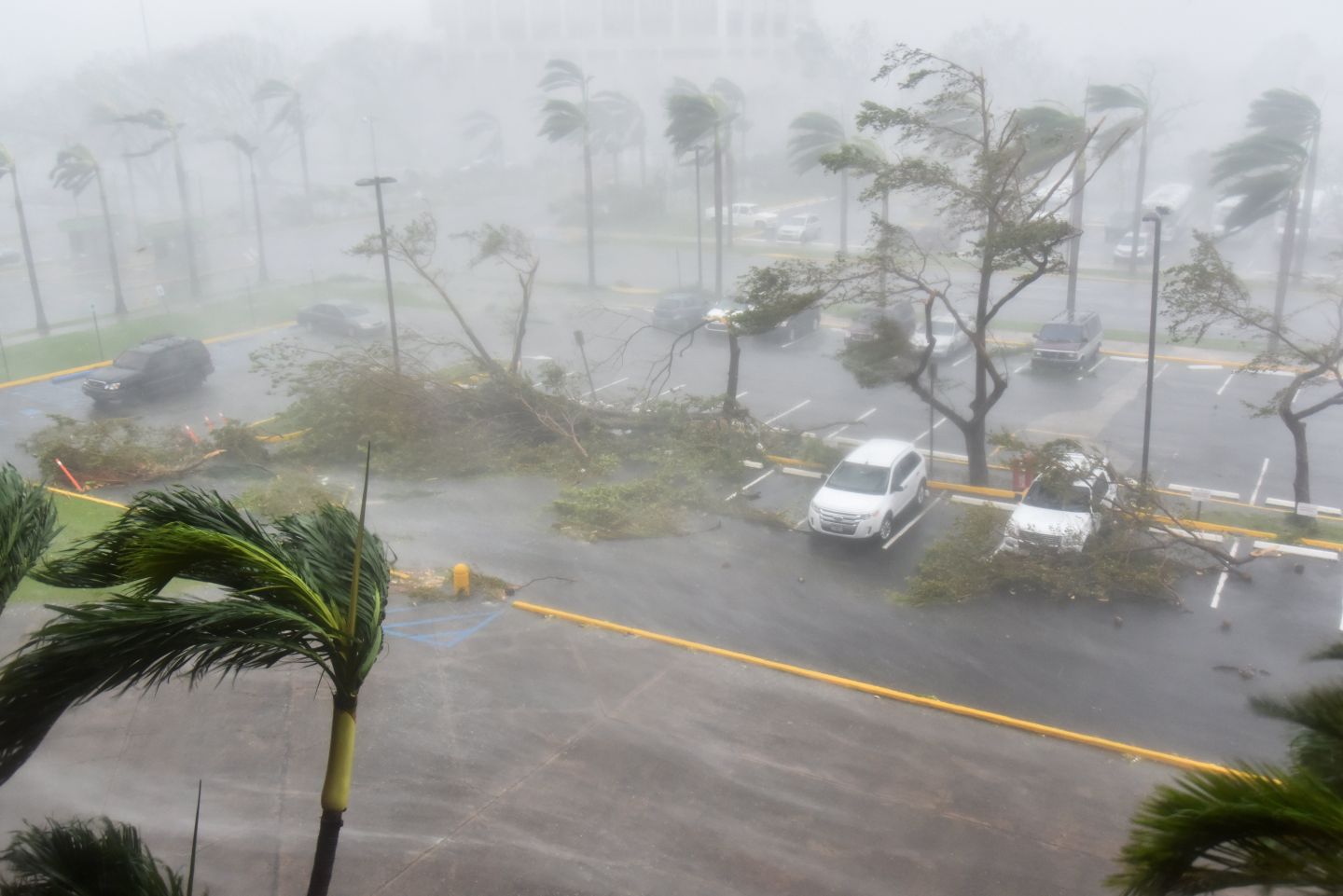 Trees are toppled in a parking lot at Roberto Clemente Coliseum in San Juan, Puerto Rico, on September 20, 2017, during the passage of the Hurricane Maria. Maria made landfall on Puerto Rico on Wednesday, pummeling the US territory after already killing at least two people on its passage through the Caribbean. The US National Hurricane Center warned of "large and destructive waves" as Maria came ashore near Yabucoa on the southeast coast. / AFP PHOTO / HECTOR RETAMAL (Photo credit should read HECTOR RETAMAL/AFP/Getty Images)
Hector Retamal — AFP/Getty Images

Hurricane Maria made landfall in Puerto Rico Wednesday as a Category 4 storm near Yabucoa, Puerto Rico, according to the National Hurricane Center, bringing with it sustained wind speeds of 155 miles per hour before weakening to 140 miles per hour. Parts of Puerto Rico are expected to receive up to 20 inches of rain and dangerous storm surges. What’s worse, this is the second major weather disaster after Hurricane Irma to hit the U.S. territory in the past two weeks—and the consequences for its infrastructure, health care and otherwise, will be dire.

Puerto Rico has already set up some 500 shelters for evacuees. But it will be difficult to address the inevitable injuries and medical emergencies that accompany such vicious storms. Hurricane Irma alone may have caused about $1 billion in infrastructure damage to Puerto Rico; on top of that, Maria could cost the cash-strapped territory and the U.S. Virgin Islands $30 billion, by some estimates.

At least seven people in the Caribbean have already died because of Maria. And even after the storm passes, residents’ medical needs will rise as they’re forced to wade through fallen trees and rubble and deal with injuries like cuts and broken bones that are extremely common following major hurricanes, according to the Centers for Disease Control (CDC). Infectious diseases also spread more easily after these kinds of weather events, and general infrastructure damage (such as to the water supply) carry unpredictable public health consequences. Young children and older adults are typically most at risk.

The major general hospital for the Caribbean island of Dominica has already taken a major beating from Maria. It’s too early to tell just how much damage there will be to the Puerto Rican health system; but medical facilities on the island have historically been underfunded, putting even more strain on health care providers in the midst of an economic crisis in the region. And widespread power outages are expected for the foreseeable future, which will force patients to rely on backup generators and aid organizations.

Puerto Rican officials haven’t minced words about the danger Maria presents. “This is total devastation,” a spokesman for Puerto Rico governor Ricardo Rossello, told CNN. “Puerto Rico, in terms of the infrastructure, will not be the same… This is something of historic proportions.”

Rossello himself asked for “America’s prayers” while Puerto Rico’s public safety commissioner Hector Pesquera laid out the stakes for those in Maria’s path in unequivocal terms: “You have to evacuate. Otherwise, you’re going to die. I don’t know how to make this any clearer.”

AccuWeather has a compilation of ways that you can assist hurricane victims.