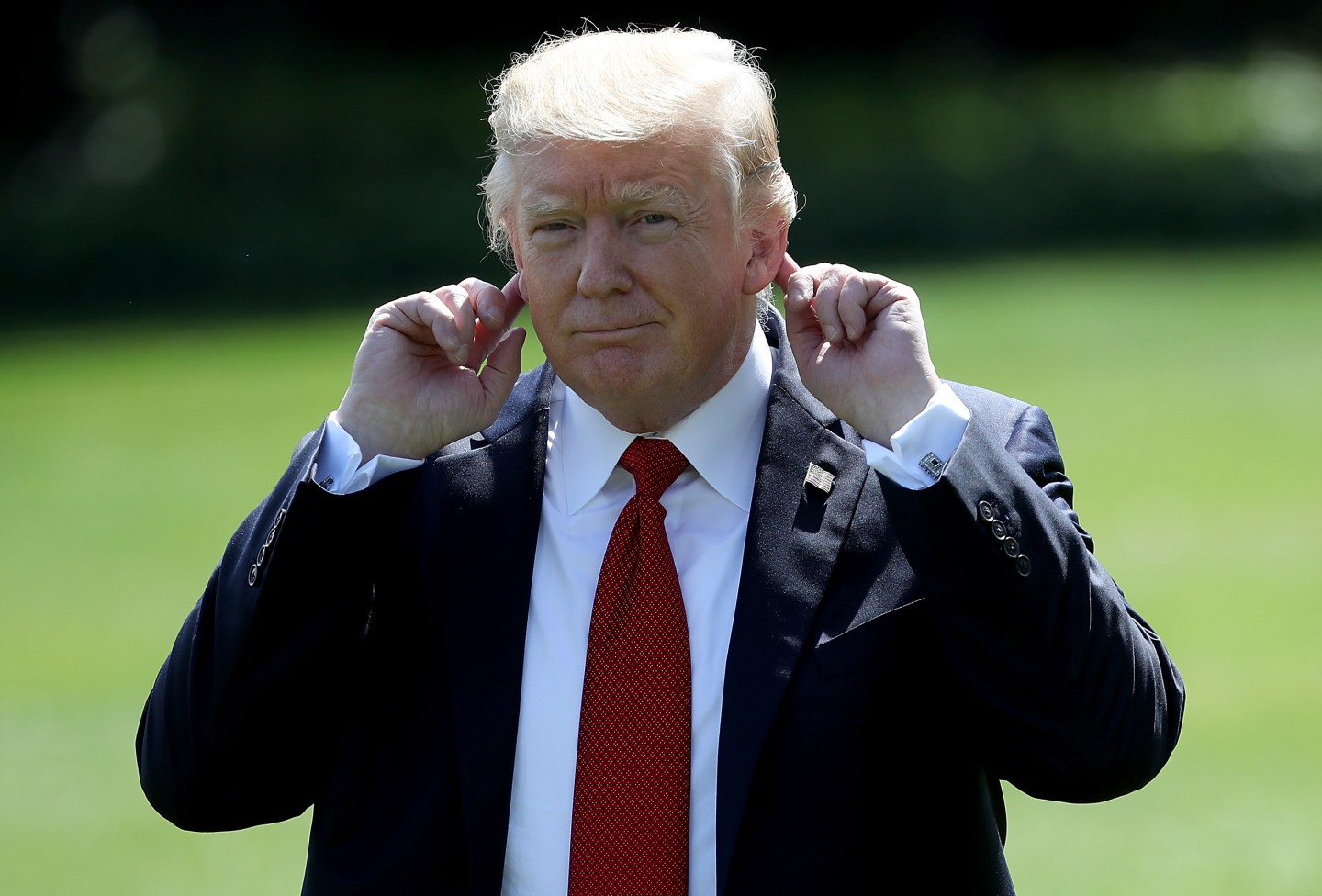 WASHINGTON, DC - SEPTEMBER 08: US President Donald Trump points to his ears as he tries to hear shouted questions from reporters while departing the White House for Camp David September 8, 2017 in Washington, DC. Trump is scheduled to meet with members of his Cabinet this weekend while at Camp David. (Photo by Win McNamee/Getty Images)
Win McNamee Getty Images

Next week, President Donald Trump is set to address the UN General Assembly in an annual tradition of U.S. presidents welcoming foreign leaders to New York. As a substantive matter, Trump has much explaining to do given deep questions regarding the U.S. role in the world. But for all the rhetorical flourishes and international media attention afforded to these speeches, there is little a president can say in Tuesday’s speech that will radically change the role the U.S. plays in the world. America is a global power whether it wants that role or not, and regardless of what an American president may or may not say to the contrary.

From Franklin D. Roosevelt and Harry Truman to today, American presidents have been important symbolic leaders of the United Nations. As such, this speech to the General Assembly should be considered as a traditional visit and speech, something akin to the lighting of the National Christmas Tree, a visit of the Super Bowl champions to the White House, or the Thanksgiving “turkey pardon.” Of course, it is an important symbolic address for Trump, but he should strive for an unremarkable speech befitting the occasion—a remarkable task for this president.

Trump’s rhetoric and policies no longer align with European elite opinion in the way Obama’s, as a “citizen of the world,” had tried to do. In the Trump years, German Chancellor Angela Merkel is considered by some commentators to be the leader of the free world and is now the moral leader of the West, typically titles reserved for American presidents. But Trump has shattered this image on the global stage largely because he has stopped signaling that he cares what they think. Take for instance, Trump’s announcement that the U.S. would leave the Paris Agreement. By contrast, Obama unilaterally signed the accord as an executive agreement amid doubts it could have been ratified as a treaty in the U.S. Senate. The global perception is that Obama cared about the world in a way now that Trump couldn’t care less.

What should Trump say, then, in this highly symbolic setting? Trump’s speech should borrow heavy from the themes of Theresa May’s September 2016 Address to the General Assembly. After Brexit, the world wanted to know if Britain still wanted a global role. May reaffirmed that while Brexit redefined the British role in the E.U., it could not be read as a permanent shift away from the global community. She then turned to reiterate multiple ways in which Britain could not, and did not want to reject its global role.

In many ways, Trump has it easier than May because the U.S. has a much more prominent global footprint. We’re not going anywhere anytime soon. Trump couldn’t pull that off even if he tried, and I’m skeptical the great businessman really wants that. The American economy is the largest in the world with a GDP of $18.5 trillion that amounts for roughly 24.4% of global production. America has 1.3 million active-duty military forces with 200,000 of them currently billeted in foreign countries. Today, American taxpayers pay a little over 1/5 of the United Nations expenses and privately, Americans donate more money to philanthropic causes, many of them international aid organizations, than any other nation’s citizens. The country could not retreat from the world even if it wanted to, and regardless of the isolationist fever in this country, no one president can change these set facts.

Trump’s speech is highly symbolic and one we should expect from American presidents. But we must be careful not to overvalue presidential rhetoric as a proxy for real global leadership. Talk is cheap, even for American presidents, and we ought to be clearheaded about our expectations for the policy impact of Trump’s first address to the General Assembly.

Alex Hindman is an assistant professor of political science at the College of the Holy Cross in Worcester, Mass.