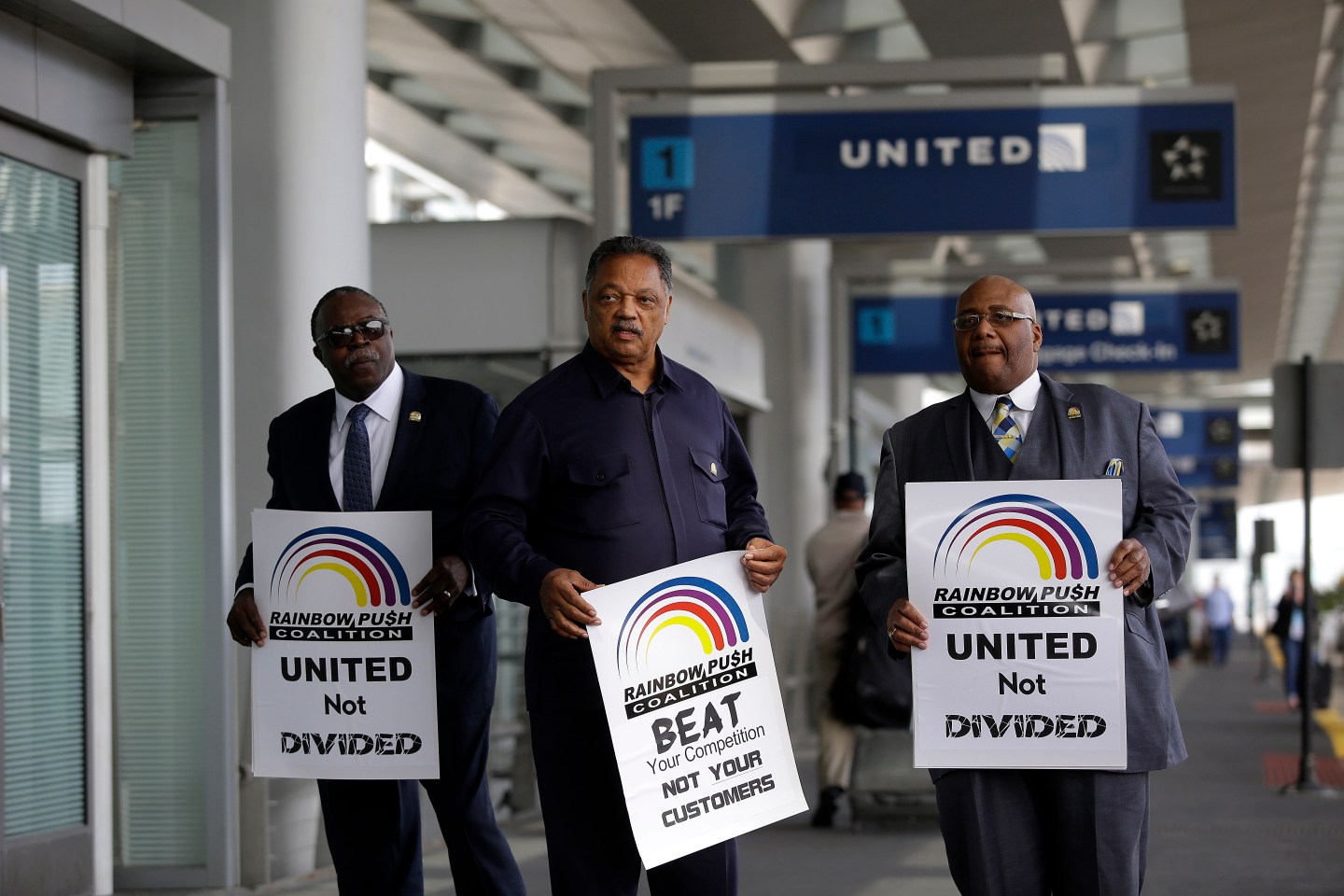 Reverend Jesse Jackson (C) holds a sign as he protest against United Airlines at O'Hare International Airport on April 12, 2017 in Chicago, Illinois. The protest was in response to airport police officers physically removing passenger Dr. David Dao from his seat and dragging him off the airplane, after he was requested to give up his seat for United Airline crew members on a flight from Chicago to Louisville, Kentucky Sunday night. / AFP PHOTO / Joshua LOTT (Photo credit should read JOSHUA LOTT/AFP/Getty Images)
JOSHUA LOTT AFP/Getty Images

Last week, the U.S. Department of Transportation decided not to pursue civil rights charges against United Airlines for its mistreatment of passenger David Dao, the 69-year-old physician dragged off a United flight in April. United broke Dao’s nose, gave him a concussion, and knocked out two of his teeth. It also made him an Internet celebrity—the video of Chicago “aviation security officers” dragging him from his seat has been viewed over five million times.

The DOT decision may seem outrageous—one flyers’ advocate called it a “dereliction of duty”—but it is a sensible act of prosecutorial discretion that should be applauded, notwithstanding the harm Dao suffered.

If every broken nose resulted in a federal case, the resources of our courts and administrative agencies would be exhausted pursuing matters better deterred through other means. The feds should act only where others cannot or will not, or where markets don’t work. The Dao incident was a case in which the wrongdoer got what was coming to them without involving the expensive and fear-inducing machinery of Washington.

Right after he was dragged down the aisle of that United jet, Dao sued United for the damages he suffered. In short order, the parties reached a settlement that presumably resulted in a large cash payment to Dao. Although the terms weren’t disclosed, it likely compensated him for his out-of-pocket costs—medical bills, new travel arrangements—as well as the humiliation he felt. If his lawyers were smart, he also got a hefty sum on top of all that.

This extra amount was not about making Dao whole, but about punishing United. After all, the settlement is merely an estimate of the amount Dao would win at trial, less the costs of bringing the case that far. And, it was pretty clear that at trial, his lawyers would have asked for, and a reasonable jury would have awarded, a sum that was intended to protect other people from United (and other airlines). To do this, the award had to send a message: Beating up passengers is going to cost you. That Dao (and his lawyers) got this money was just a strange feature of a legal system that relies to a large extent on private litigation to deter wrongdoing.

The video, controversy, and ensuing case caused United to change its policies. Immediately, it significantly upped the amount it was willing to compensate displaced passengers. Now, passengers can receive up to $10,000 if they find themselves like Dao—involuntarily bumped. The airline also promised to reduce overbooking and to never again remove a boarded passenger. The negative publicity of the event and the public pressure that resulted caused United to dramatically improve its conduct.

It was against this backdrop that the Department of Transportation made its determination. As a government agency, the DOT enforces statutes passed by Congress and rules it promulgates. But its core function is to incentivize good behavior on the part of airlines and others under its jurisdiction. If it believed that the private lawsuit and the negative publicity were insufficient to protect the traveling public, then it could levy fines or punish United in other ways. In this case, the allegation was that Dao’s “civil rights” were violated. But, short of a finding that he was targeted on the basis of a protected category—such as his race or gender or religious belief—this was a stretch. In addition, federal agencies usually only act when there is a “pattern or practice” of bad behavior. There was no evidence of other Daos in the record, and this saved United from additional sanctions.

This narrow conception of federal power makes sense. Lawyers, like those representing Dao, act as private attorneys general. Where they can do the work of deterrence without spending taxpayer money, then we all benefit. Likewise for the public pressure brought by Internet-fueled outrage. United was pressured—in court and in the court of public opinion—to be better, and it didn’t cost John and Jane Q. Public anything. This is a win for all of us, not a setback to the cause of civil rights or the wellbeing of airline passengers.