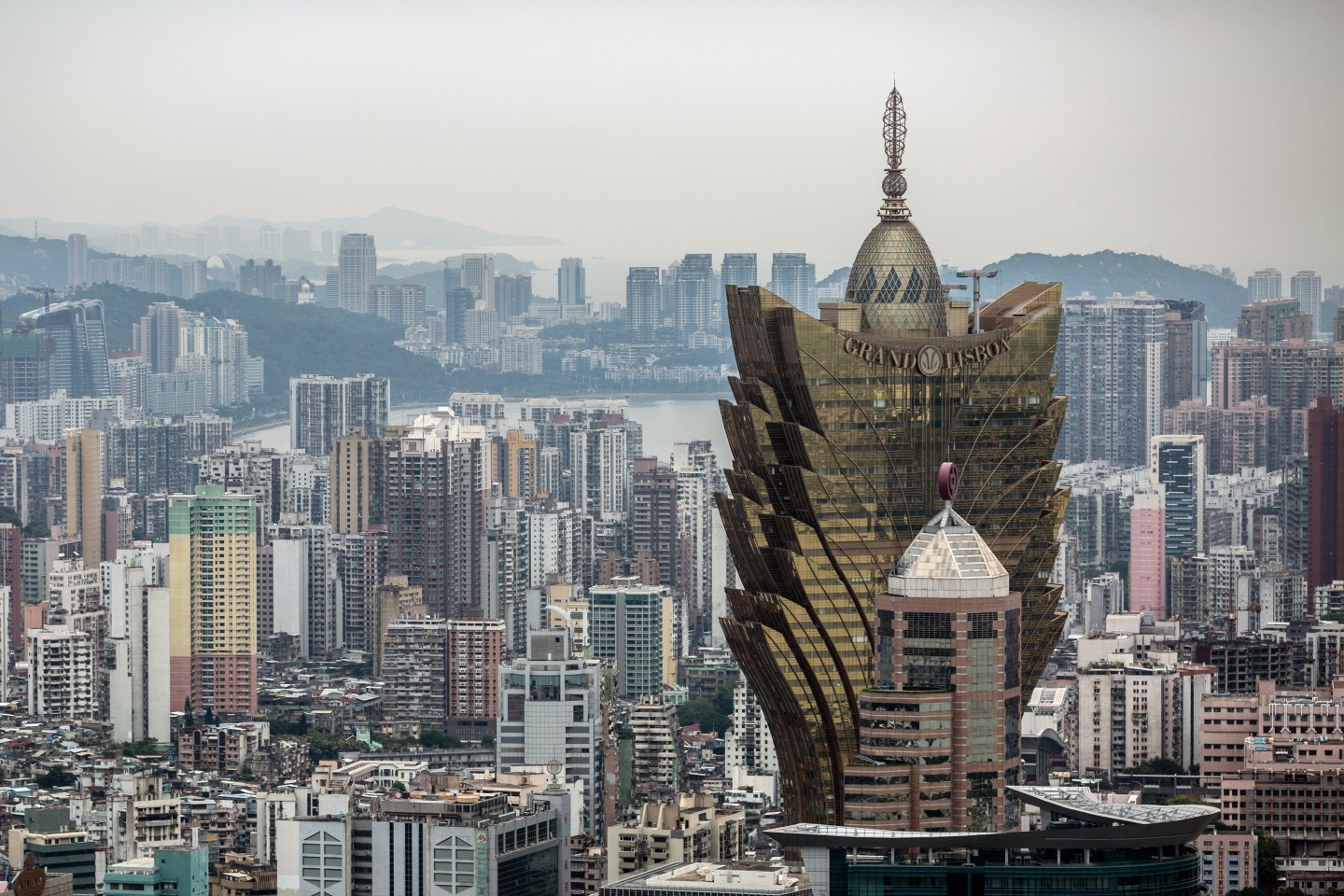 A general view shows the skyline and the Grand Lisboa casino (R) in Macau on May 12, 2015. The former Portuguese colony saw its second-worst monthly casino revenue decline of 39 percent year-on-year for March, as China encourages its semi-autonomous territory to diversify from gambling and reins in high-rolling visitors from the Chinese mainland. The fall has mostly been attributed to a corruption crackdown spearheaded by Chinese President Xi Jinping, which has dented the VIP gaming market. AFP PHOTO / ANTHONY WALLACE (Photo credit should read ANTHONY WALLACE/AFP/Getty Images)
Anthony Wallace—AFP/Getty Images

Over the past five years, Macau has raked in $70 billion in taxes from the casinos that have made the territory the largest gambling center in the world. But it has invested less than 10% of that take – by far its largest source of income – in much needed infrastructure.

That shortfall was laid bare last month when Macau was struck by a typhoon that killed 10 people and wiped out power and water for over half the city. Years of mismanagement, poor planning and corruption are key reasons why the money has not been better utilized, according to academics, legislators and residents. “They could spend much more,” said Eric Sautede, a former professor at the University of Macau, and now a researcher specializing in the former Portuguese colony, referring to infrastructure investment.

He said the government’s coffers were so large it could operate for the next several years without collecting taxes.

However, taxes from Macau’s six casino operators – which account for more than 80% of government revenue annually – continue to pour in.

The southern Chinese territory has zero public debt and had fiscal reserves of $55 billion at the end of 2016, equal to 540% of public expenditure that year, according to statistics from Macau’s financial bureau.

Macau’s monetary authority said it invests the reserves in a globally diversified portfolio of assets, with a “stringent control on the overall risk level of the portfolio.”

Macau’s government typically distributes an annual cash handout of 9,000 patacas ($1,117.73) for each of the more than 600,000 people living in the territory, as well as subsidies for things like education and small businesses.

The government’s execution rate for infrastructure projects like roads, bridges, ports, and schools has also been low in recent years, according to an analysis of government figures.

In 2013, as casino revenues hit a record $45 billion, the government had an execution rate of under 40%.

The government said in an email without elaboration that projects were “hindered due to different reasons.”

Execution rates have been improving since 2014, after the appointments of Beijing-backed officials charged with cleaning up a trail of corruption left by predecessors now facing lengthy jail sentences.

A new bill is also planned to improve transparency in the drafting of budgets and monitoring of public finances.

However, unfinished public works projects are still scattered around Macau with skyrocketing budgets, according to economists. A new public hospital was meant to open this year but is still in the early construction phase. Macau’s new ferry terminal, meanwhile, was scheduled to open in 2007 but was only finished this year, 10 years behind schedule and over five times its original budget.

“I remember government officials talking about plans to build a light rail in 2003 and now it is 2017 and there is still no rail system,” he said.

The government is still grappling with the aftermath of the typhoon, this week estimating the losses at $1.4 billion. More than 100 public facilities were damaged and 500,000 trees were destroyed, while two casinos remain shuttered. The figures did not include potential losses for companies forced to suspend business operations due to typhoon damage.

The government has appointed a new committee to handle natural disasters and says it will build a tidal wall to help alleviate heavy flooding in the future.

However, long-time residents say they don’t expect changes any time soon. “The government has been talking about it for decades, “ said Harald Bruning, the director of the Macau Post Daily newspaper, referring to the tidal wall project. “I guess the project would only be completed in the next decade.”