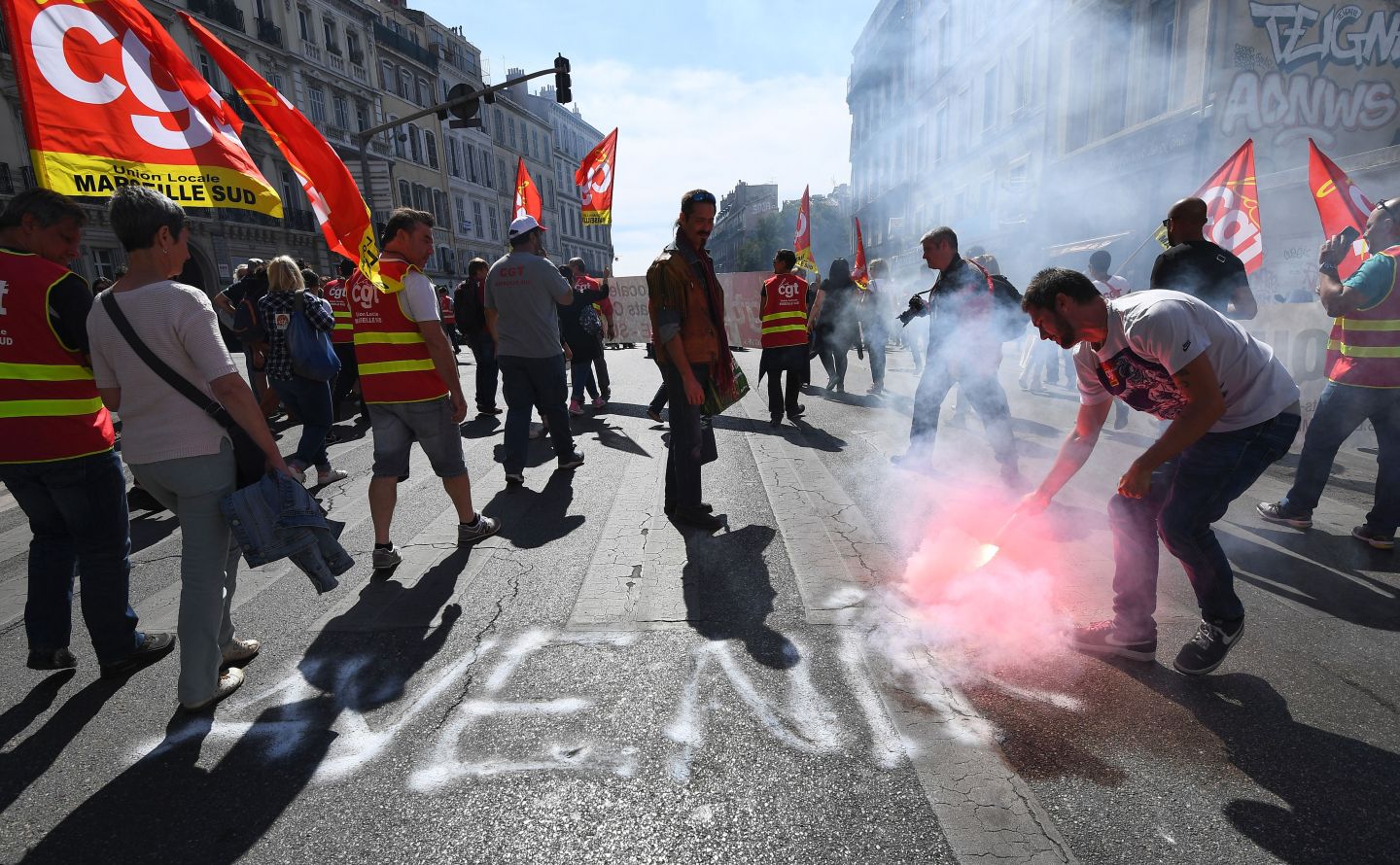 Demonstrators take part in a protest called by several French unions against the labour law reform in Marseille, southern France, on September 12, 2017. French unions launched a day of strikes and protests today against French President's flagship labour reforms, a key test as he stakes his presidency on overhauling the sluggish economy. More than 180 street protests are planned nationwide against the reforms, which are intended to tackle stubbornly high unemployment by loosening the rules that govern how businesses hire and fire people. / AFP PHOTO / ANNE-CHRISTINE POUJOULAT (Photo credit should read ANNE-CHRISTINE POUJOULAT/AFP/Getty Images)
ANNE-CHRISTINE POUJOULAT AFP/Getty Images

President Emmanuel Macron faced the first challenge on the streets to his business-friendly reform agenda on Tuesday, as workers from the hard-left CGT union marched through French cities to protest against a loosening of labor regulations.

Sounding a call to the working class, Philippe Martinez, the head of the Communist Party-linked CGT, branded the reforms a “social coup d’état” and took offense at his pledge to give no ground to “slackers.”

Labour unions have scuppered previous attempts to weaken France‘s labor code, but this time there was comfort for Macron as two other unions, including the largest, the CFDT, declined to join the protests.

After weeks of negotiations, the government last month set out measures including a cap on payouts for dismissals judged unfair, and greater freedom for companies to hire and fire.

The reform makes no direct reference to the 35-hour week, a totem of the labor code, though it hands firms more flexibility to set pay and working conditions. The government plans to adopt the new measures, being implemented by decree, on Sept. 22.

During a trip to Athens on Friday, Macron told French business leaders: “I am fully determined and I won’t cede any ground, not to slackers, nor cynics, nor hardliners.”

He said the “slackers” comment was aimed at those who had failed to push through reforms in the past, but many interpreted it as an attack on the unemployed or on workers making the most of job protection.

French workers have long cherished the rights enshrined in the labor code. But companies complain it has deterred investment and job creation and stymied economic growth. Unemployment has been above 9 percent for nearly a decade.

Macron’s reforms are being followed in Germany as a test of his resolve to reshape the euro zone’s second-biggest economy, a must if he is to win Berlin’s backing for broader reforms to the currency union.

The CGT is France‘s second-biggest union, though its influence has been waning. Martinez said Tuesday’s nationwide protests were just the “first phase” and that more would follow. He called Macron’s reference to “slackers” an insult to workers.

CGT workers from the rail, oil and power sectors have said they will heed his call for strikes on Tuesday, but French media reported that most of the country’s train service was running as normal.

Macron himself was due in the French Caribbean territory of Saint Martin on Tuesday to survey the devastation wrought by Hurricane Irma.

Read: Emmanuel Macron’s Plan to Save France—and the Euro

Governments on the political left and right have been trying for decades to overhaul the 3,000-page labor code, but ended up watering down their plans in the face of street demonstrations.

Macron was economy minister in the Socialist government of president Francois Hollande, whose attempt at labor reform led to weeks of protests that at their peak brought 400,000 onto the streets, and stoked a rebellion within his own party.

Hollande was forced to dilute his proposals, but so far, there are no signs of Macron feeling compelled to back down.

An opinion poll published on Sept. 1 indicated that voters have mixed views on the reform. Nearly six in 10 said they opposed Macron’s labor decrees overall. But when respondents looked at individual measures, most received majority support.

With economic growth accelerating, unemployment on a downward trend and the leading unions divided in their response to the reforms, it is not clear whether the protests will eventually gain significant momentum.

Finance Minister Bruno Le Maire told the newspaper Les Echos that voters had chosen Macron “to carry out the reforms that France has shrunk away from for 30 years.”