4,000 Police Deployed to the Streets of Bangkok Ahead of Yingluck Verdict 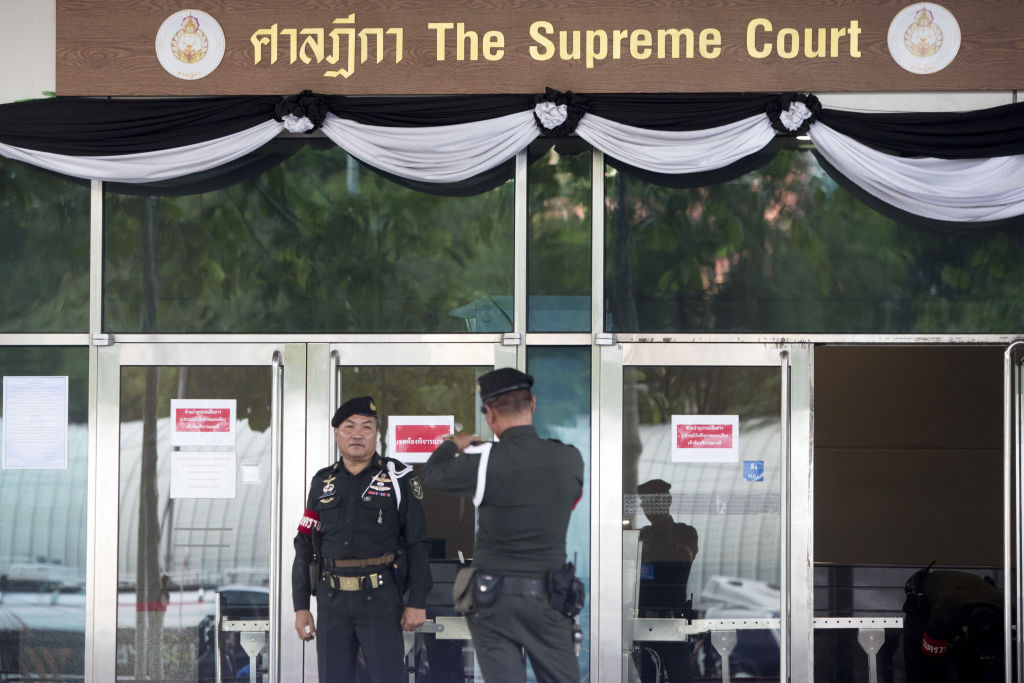 A police officer poses for a photograph outside the Supreme Court in Bangkok, Thailand, on Friday, Aug. 25. 2017. A top court in Thailand will rule Friday on charges of negligence against former Prime Minister Yingluck Shinawatra, a verdict that risks rekindling political tensions in Southeast Asia's second-biggest economy. Photographer: Brent Lewin/Bloomberg via Getty Images
Bloomberg Bloomberg via Getty Images

Hundreds of supporters of ousted former Thai prime minister Yingluck began to gather outside Bangkok’s Supreme Court early on Friday hours before the court was due to rule on a negligence case against her in which she faces up to 10 years in prison.

The long-awaited verdict could inflame tension in the Southeast Asian country and have far-reaching implications in the politically divided kingdom.

Bangkok’s metropolitan police said around 4,000 police were deployed at the court and checkpoints had been set up.

A rice subsidy programme – a flagship policy of Yingluck’s administration – saw her government buy farmers’ crops at prices up to 50 percent higher than market prices. The policy was popular with farmers but left Thailand with huge rice stockpiles and caused $8 billion in losses.

Yingluck, who has pleaded not guilty to the negligence charges against her, has said she was only in charge of coming up with the policy but not the day-to-day management of the scheme. Her administration was removed in a 2014 military coup.

In the northeastern province Khon Kaen, a Shinawatra stronghold, a leader of the red shirt political movement that supports Yingluck said her supporters felt frustrated.

“Some people may want to demonstrate publicly to show their unhappiness about how Yingluck is being treated,” he said.

Shinawatra’s Puea Thai Party has said it does not support acts of violence and urged supporters to gather peacefully.

Some supporters outside the court in Bangkok held roses while others wore white gloves with the word “love” on them.

Bangon Saeliang, 56, a market vendor from Bangkok, said she turned up to support Yingluck because she felt the former prime minister had done nothing wrong.

“Farmers benefited from the scheme,” she said.

Before giving a verdict in Yingluck’s case, the court will rule in the case of Yingluck’s former commerce minister Boonsong Teriyapirom who is accused of falsifying government-to-government rice deals between Thailand and China in 2013.

The Shinawatra family has dominated Thai politics for more than 15 years and their parties have won every general election since 2001, but it is at the heart of a bitter and bloody power struggle in Thailand.

Yingluck’s brother, former prime minister Thaksin Shinawatra, was ousted in a 2006 coup. Supporters of the Shinawatras accuse the ruling generals of political persecution.

The military government has acknowledged it wants to maintain permanent influence over future elected governments, partly through a new constitution that took effect earlier this year.

Prime Minister Prayuth Chan-ocha, who led the 2014 coup against Yingluck’s government, has said the coup was to end political turmoil in the country. He has promised that an election will be held next year.

Regardless of whether she is found guilty or innocent, Yingluck will not be able to run in that election because she was banned from politics for five years in 2015 by the junta’s legislature for alleged graft in the rice-purchasing programme.

If Yingluck is found guilty she has 30 days to appeal and is expected to post bail, avoiding any immediate prison time.