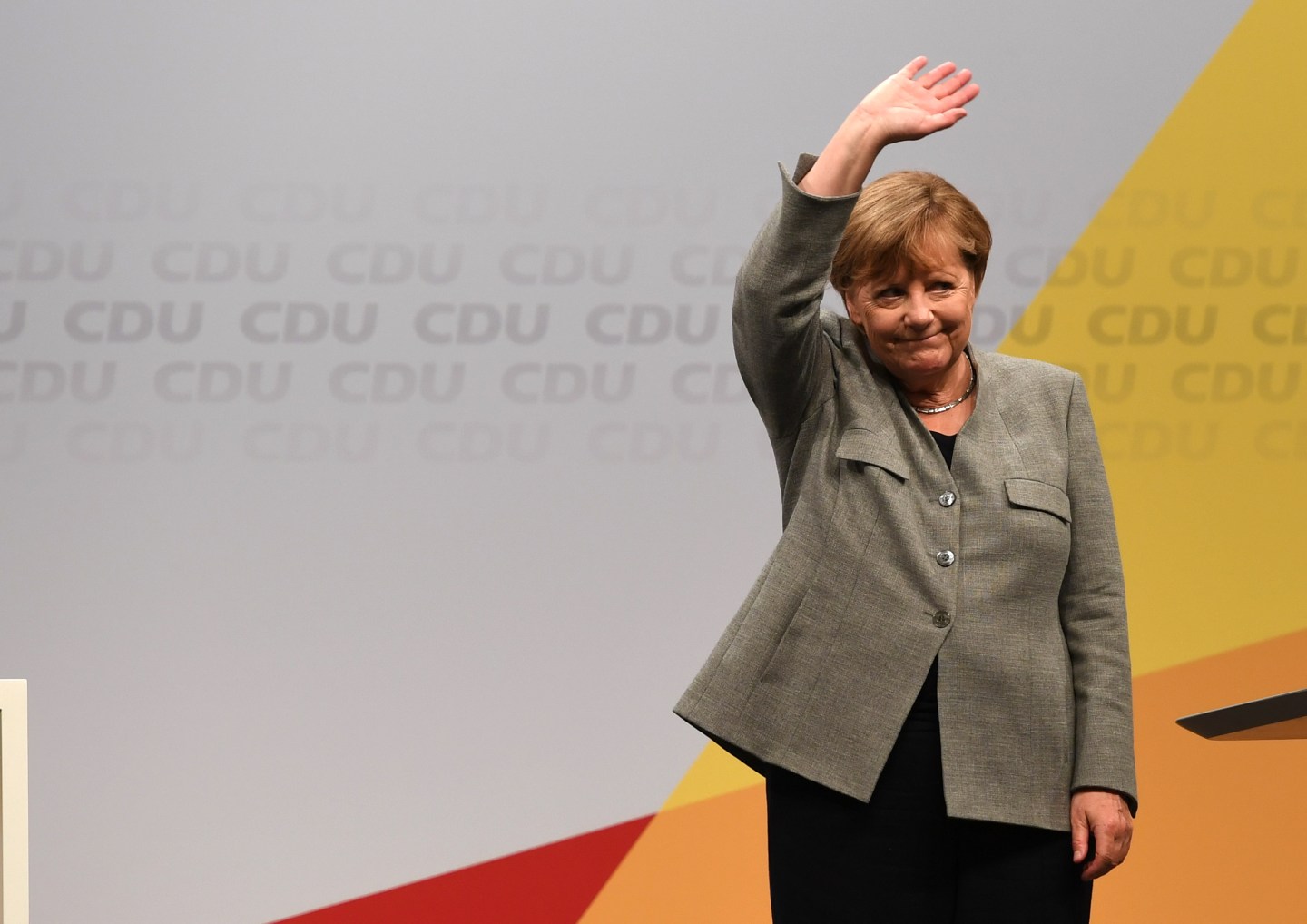 What’s your favorite emoji? How do you deal with sleep deprivation? Are you afraid of World War III?

Those were some of the questions put to Chancellor Angela Merkel in an hour-long YouTube live interview that allowed her to demonstrate that she’s getting serious about social media — and reach out to young voters.

For Merkel, 63, it was the first venture into the cyberspace populated by twenty-somethings as she seeks a fourth term in elections next month. She was interviewed for the event by four German YouTube stars — among them tech blogger Alexander Boehm, whose alias is Alexi Bexi, and Ischtar Isik, who has over 1 million subscribers for video posts that more usually tackle her choice of fashion.

“We’re trying to get in touch with people via the internet,” Merkel told Isik, who turned out to be an adept interviewer and asked why the turnout of 18-to-21 year-olds at the last election was the lowest in 45 years. “In the end it’s about your life, and you thinking about which party can best realize what’s important to you when in government.”

While Merkel appeared at ease throughout the event, she’s a long way from deploying an effective campaign online. She’s popular with young voters — 57 percent would prefer Merkel as chancellor, according to a recent Forsa poll — but compared to most of her peers she’s a social-media neophyte. She’s the only Group of Seven leader without a Twitter account.

U.S. President Donald Trump has 50 million subscribers on Facebook and Twitter and regularly moves markets with his early-morning tweets. While Merkel’s Facebook page has 2.4 million followers, the posts aren’t very personal, and some of the site’s most popular comments slam her for her refugee policy.

Less than six weeks before the Sept. 24 election, the YouTube interview suggests Merkel is aware of the need to catch up as fringe rivals including the anti-immigration Alternative for Germany and the anti-capitalist Left party try to dominate the online political debate. Next week Merkel will for the first time speak at Gamescom, Europe’s biggest computer games trade show that’s expected to draw about 350,000 visitors, many of them teenagers who attend dressed like their favorite digital heroes — from Star Wars stormtroopers to Manga heroines and fantasy game sorcerers.

YouTube has become an invaluable tool for politicians as large European broadcasters invest in pooling video channels on the platform. Bertelsmann’s RTL Group, which has interests in about 60 channels across Europe and Asia, racks up billions of digital video views each month after buying a stake in a web video network called BroadbandTV.

Germany’s ProSiebenSat.1 Media SE, Italy’s Mediaset SpA, and France’s Television Francaise 1 SA have agreed to jointly push their web-video efforts to better negotiate with big advertisers. The alliance’s prime asset, Studio71, racks up more than 6 billion video views a month with stars ranging from Hollywood big shots such as Dwayne “The Rock” Johnson to LeFloid, a tattooed German who became the first YouTuber to interview Merkel in 2015.

Wednesday’s event was more subdued. Merkel touched on several issues of interest to young voters, saying that she wants to improve how German schools teach coding and internet skills and pledging that her government will invest more in electric-car charging infrastructure.

Pressed on the need to lead by buying more e-cars for the government fleet, Merkel insisted “we will do more.”

“For me it’s a bit difficult because I drive in an armored car,” she said with a straight face, “and there are no electric versions of that.”

When Merkel was asked about sexism and working with so many “machos,” the chancellor said she’s always fought the notion that physical attributes are important in a politician. She insisted that she’ll work to ensure a Cabinet that’s half women, in so far as she is able to dictate the make-up of her own party’s ministers in a coalition.

Merkel’s YouTube live interview had about 1.2 million views as of Thursday afternoon, a decent amount for a political clip. Vice Chancellor Sigmar Gabriel, who campaigns for the Social Democrats and backs Merkel’s rival Martin Schulz, did a similar live interview streamed on Facebook, which has been clicked 33,000 times.

Not everyone was convinced by Merkel’s performance. Mirko Drotschmann, or MrWissen2go, a science blogger with about 500,000 subscribers who has recently posted videos on Germany’s political parties, Islamic State and climate change, said he would have liked to grill her more on the refugee crisis.

“She tends to evade uncomfortable questions,” he said.

The chancellor didn’t duck the issues of war and sleep. Merkel said she doesn’t have any tricks to deal with sleep deprivation during all-night summits: she simply needs less shuteye than others, and still gets tired on occasion.

She isn’t afraid of another world war because she’s campaigning hard for a diplomatic solution to the conflict with North Korea.

“Smiley,” she said, making the appropriate face. “If things are good, even one with a little heart.”