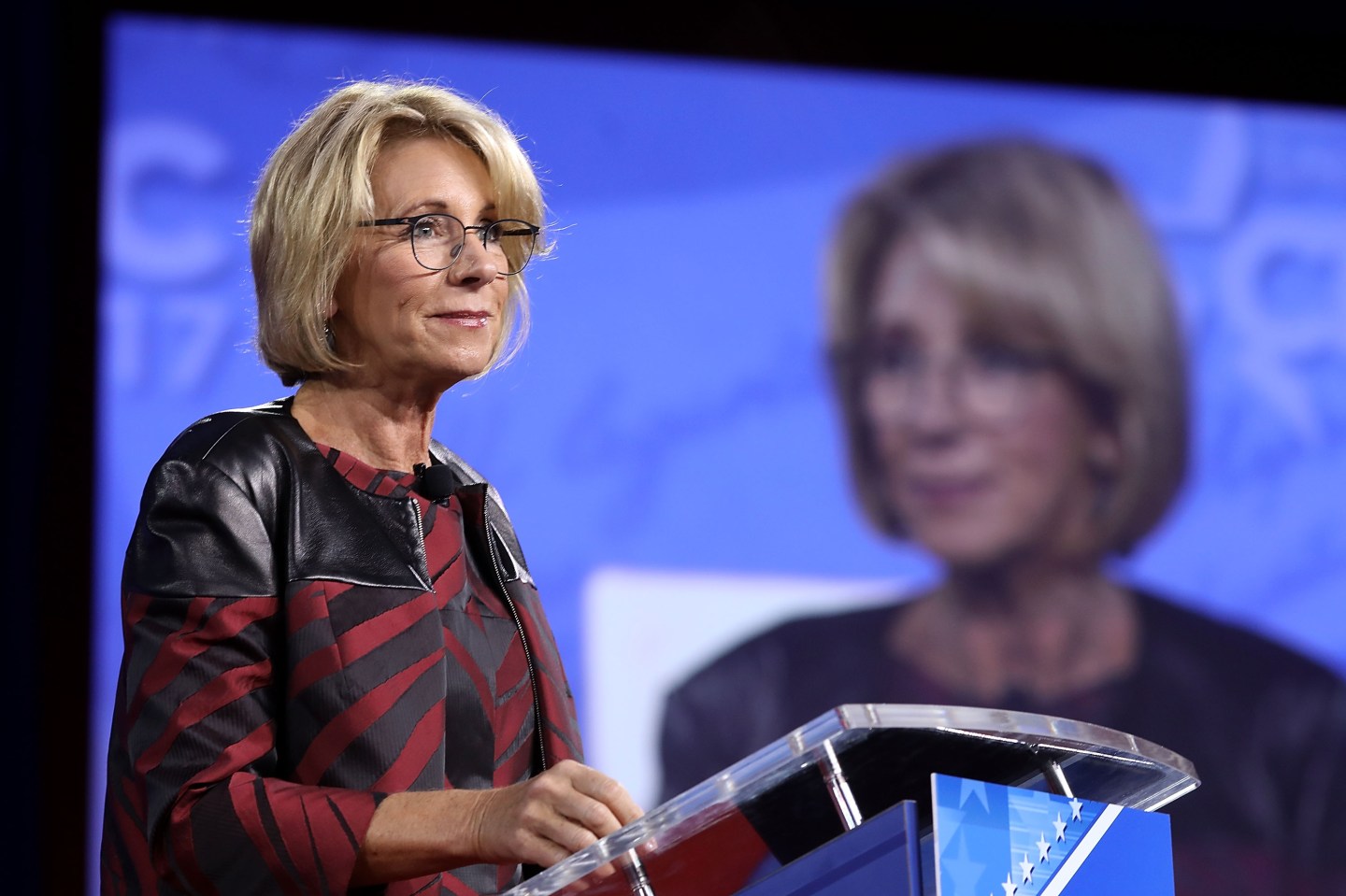 In an interview with The Associated Press, Education Secretary Betsy DeVos spoke about a range of subjects, from for-profit schools to sexual assault on college campuses.

Some of her comments:

“We think that there has been an overreach in many cases on the part of the federal government in really intruding on states’ issues and states’ areas of responsibility as well as trying to engineer things from the federal level in a way that is not helpful to students overall.”

“Let’s be clear, no student should be defrauded and in case of fraud there should be remedy. But we also know this approach has been unevenly applied and if there’s going to be regulation around some institutions we believe it needs to be fairly applied across the board.”

“I think there is an opportunity for the federal government to set a tone and I’m working to continue to do so every opportunity I have to talk about this to encourage states to look at programs within their states to consider the president’s, the president has talked repeatedly about empowering parents with more choices and we are collectively discussing the best way to implement something like that, to encourage that from the federal level without enacting a big new federal program that’s going to require a lot of administration.”

“Michigan has had a very robust accountability mechanism in that the chartering authorizers are held accountable for the performance of the schools that they charter. And there have been charters schools that have closed because of lack of enough students, so not enough parents choosing to send their child to whatever school or their fiscal performance. The fact that there have been charter schools closed I think is evidence of the fact that there is accountability. At the same time, there have been zero traditional public schools closed in Michigan for performance and I think that’s a problem.

“I think this has been a question before the courts and the courts have opined. We have not been involved with the Justice Department’s posting and again I think as they have stated, this was an internal issue and one that they are continuing to move forward on. I think the bottom line here is that we want an environment where all students have an opportunity, an equal opportunity to get a great education whether that’s at the K-12 level or the higher-ed level.”

“Let me just comment on what I think was an out of context comment and a misunderstanding with the HBCUs. When I talked about it being a pioneer in choice it was because I acknowledge that racism was rampant and there were no choices. These HBCUs provided choices for black students that they didn’t have. I think that that comment was — while I could have said it, stated it much better — my intention was to say they were pioneering on behalf of students that didn’t have another choice. This was their only choice.”

“My last three decades have been working on behalf of primarily minority families and students to allow them to make choices for their kids. And to think anything otherwise, my feelings otherwise for providing opportunities for minority students is just absolutely false. I mean, that’s where my heart has been for three decades is to really empower and allow all families the same kind of opportunities I’ve had for my kids.”

“Having conversation around how you treat one another is a good thing, but also know that often actions speak louder than words and so I think the opportunity to model good behavior when children are at a very young age is important. I have six grandchildren and I’m keenly aware of the opportunity I have as a grandmother and my husband as a grandfather to pour into those children. And I would just hope that all parents and grandparents are really intentional about that. They’re the primary educators. Clearly educators in the classroom have an opportunity as well but it’s not a one place, one time conversation. It’s really is a lifetime of conversation and modeling I think.”

“I know there are many schools that do a great job for the students they serve. And at the same time I know that even the best public school might not be a great fit for every single child and we need to recognize and acknowledge that. But we also need to encourage schools, public schools that are doing a great job to not rest on their laurels but to continue to improve because unless you’re constantly oriented around continuous improvement and excellence we know that there’s going to be reversion to something less than that.”

“I think we need to honor and support great teachers in a way that I don’t think they’ve been probably recognized as much recently, and we also need to be honest if there are classroom teachers who are not doing the job and I think there’s got to be more conversation around that because we know for a fact that great classroom teachers are irreplaceable when it comes to students’ ability to advance and achieve.”