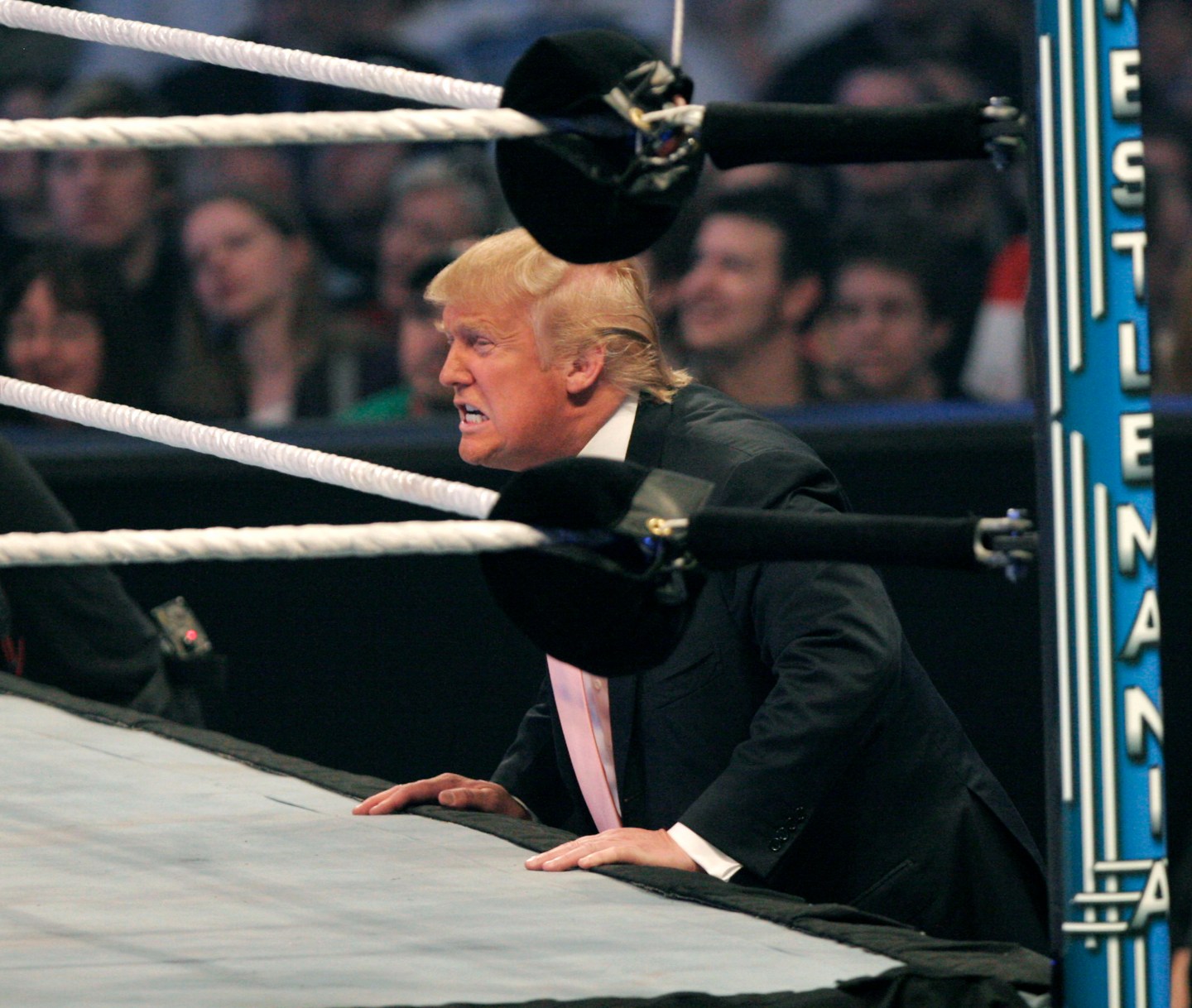 Donald Trump cheers on his fighter during the Battle of the Billionaires at 2007 Wrestlemania at Ford Field in Detroit, Michigan.
Bill Pugliano Getty Images

As an investigation into possible Russian collusion unfurls and Republican legislators struggle to push through the health care reform agenda that fueled his candidacy, President Donald Trump has once again taken to Twitter to address his top priority: attacking the media. Literally.

The video clip shows Trump pummeling a man with a CNN logo emblazoned on his head. It’s modified from actual footage of Trump wrestling in the WWE, and the man made over in CNN’s image is WWE head Vince McMahon. According to the BBC, the altered video originally surfaced on a pro-Trump Reddit forum.

CNN immediately derided the tweet as “juvenile behavior far below the dignity of his office” and an incitement to violence against members of the press. If true, that would violate Twitter’s terms of service, which specifically prohibit direct or indirect threats of violence.

Democratic politicians have, not surprisingly, been equally critical of the President’s online outburst, with California Representative Ted Lieu calling it “beyond disturbing.” But there are already criticisms on the right, as well, with Republican CNN and ABC commentator Ana Navarro also calling the tweet “an incitement to violence.”

More backlash from the right could be forthcoming. Republicans have already criticized Trump for a series of tweets last week making scathing personal attacks on Morning Joe cohosts Joe Scarborough and Mika Brzezinski. Among other Republican comments, Senator Lindsey Graham said the attacks were “beneath the office” of the Presidency.

There are real-world signs that Trump’s treatment of the media has amounted to the promotion of violence. There were multiple incidents of reporters being attacked at Trump campaign events last fall. Just over a month ago, Republican congressional candidate Greg Gianforte was charged with assault for attacking a Guardian reporter at a political rally—an attack that the victim, coincidentally, described as a “body slam.”

Gianforte nonetheless won his election. Trump’s attacks on the media also seem to go over well with his core supporters, who are highly suspicious of the press. But those who know their wrestling have questioned whether this particular media attack really has its usual upside for Trump.

Odd thing about the Trump WWE tweet is that match ended with him eating a Stone Cold Stunner. Is that part of the metaphor?