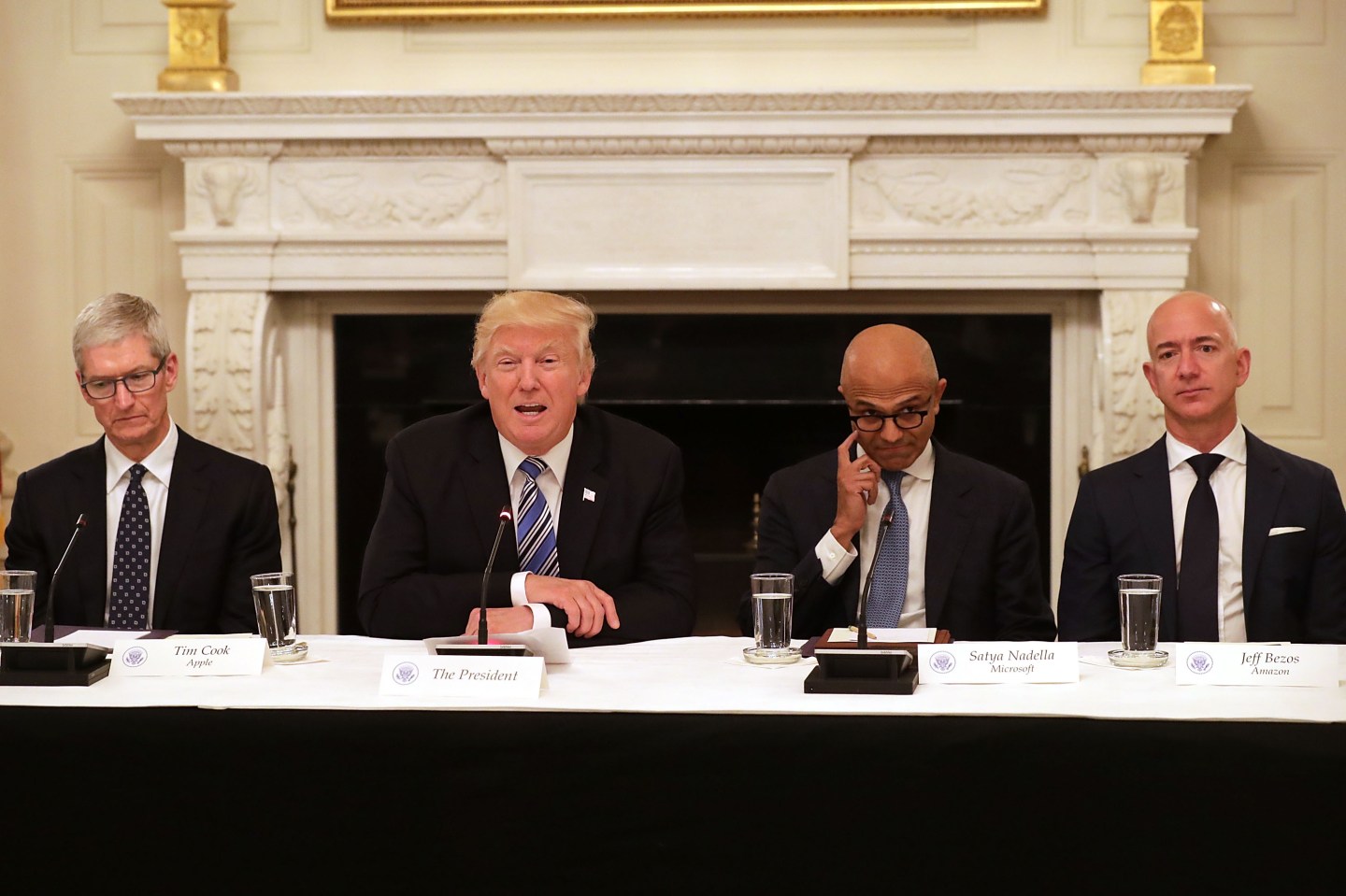 If you had your druthers, you’d rather be a top executive in the advertising world this week than a tech mogul. While the ad world is meeting, dealmaking, and partying in the glittering and steamy French Riviera at the Cannes Lions International Festival of Creativity, tech leaders answered the summons of President Trump to have a near-meaningless conversation about modernizing the federal government’s technology infrastructure.

This is a noble goal, to be sure. It’s just not a new one. The ‘we’re-still-using-floppy-disks’ meme is a hearty perennial for all new administrations. It will be for the next one too. The New York Times reports that businessman of the moment Jeff Bezos urged Trump to focus the government on buying commercial technology, a worthy aspiration and also not a new one. The photo accompanying this Wall Street Journal story of Apple’s (AAPL) Tim Cook, Microsoft’s (MSFT) Satya Nadella, and Amazon’s (AMZN) Bezos looking as if they’d just received word of an illness in the family while Trump orates tells me almost everything I need to know about this meeting.

Meanwhile, in Cannes, I moderated a panel consisting of Jean Lin, CEO of the global ad agency Isobar, and Vincent Wei Liu, head of her client Tencent’s (TCEHY) artificial intelligence lab. Yes, AI is invading advertising and marketing too, and in exciting ways. Face recognition, for example, might help marketers better target customers. The two were upbeat, as one tends to be in Cannes, that AI will take over repetitive tasks, like monitoring media mentions, while leaving the truly creative work to humans. IBM (IBM) Watson makes a similar argument about how machines can help doctors buttress their diagnoses while they focus on patient care.

Swinging subject matters wildly, Monday evening I interviewed Steve Schiffman, CEO of Calvin Klein, part of publicly listed PVH (PVH). He talked about the challenges of unifying creative leadership for a global brand after taking over as CEO several years ago. He also broke a little news, strongly suggesting that Calvin Klein is working again with one of its most famous spokeswomen, Brooke Shields, after 37 years. “We are going to be working with Brooke again very soon,” he told me, in a comment picked up by The New York Post’s Page Six (!). (Incidentally, Shields hinted as much in February, when she appeared at a Calvin Klein fashion show.)

I’ll report more from Cannes tomorrow. In the meantime, I’m honored to have my book about Uber, Wild Ride, reviewed on the front page of the upcoming New York Times Book Review, and by Walter Isaacson no less.