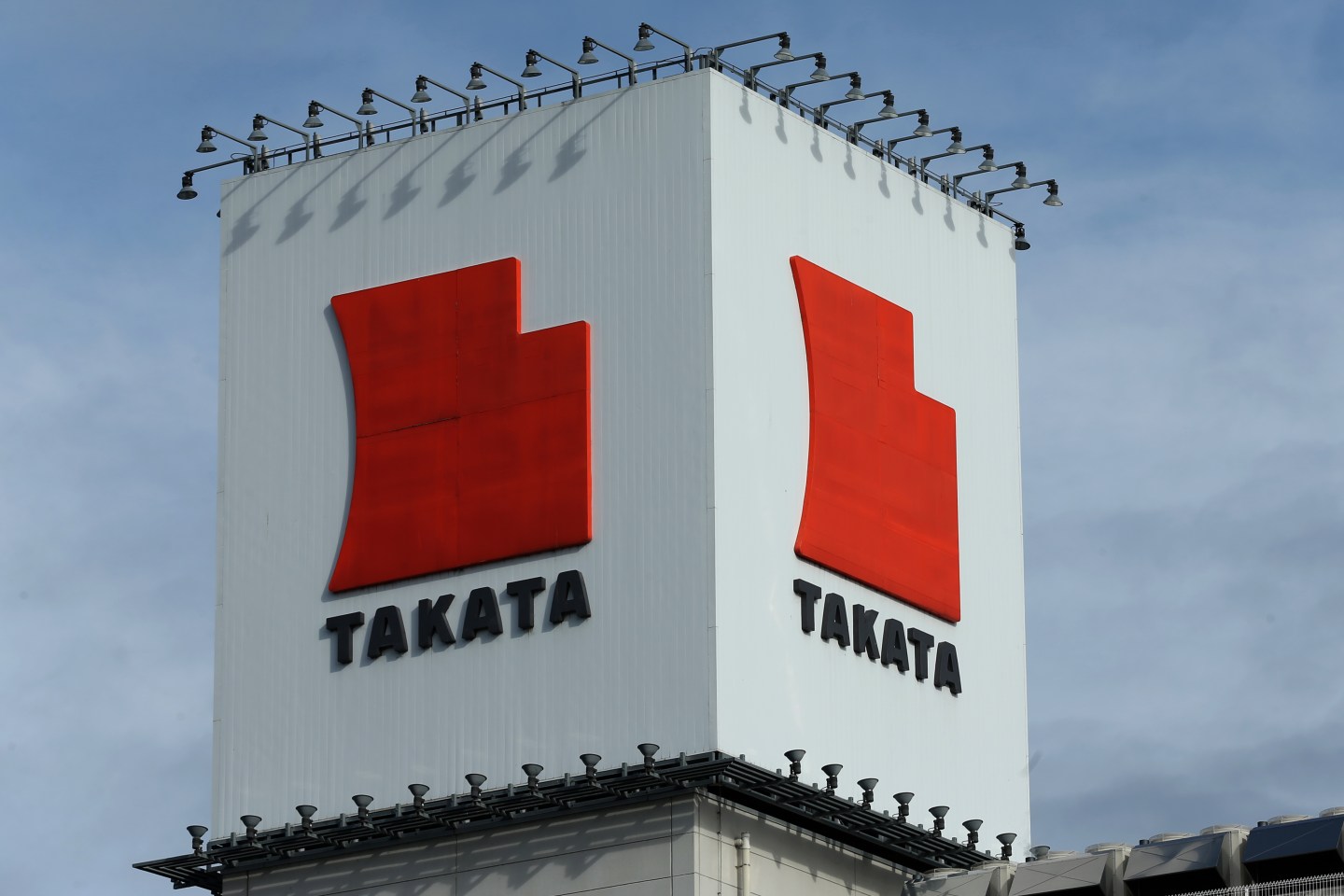 Signage for Takata Corp. are displayed at the company's Echigawa plant in Echigawa, Shiga, Japan, on Friday, Nov. 25, 2016. Takata's selection of a bidder is running behind schedule as the shortlisted companies embark on a more thorough review of the air-bag maker behind the biggest auto safety recall, according to people familiar with the matter. Photographer: Buddhika Weerasinghe/Bloomberg via Getty Images
Buddhika Weerasinghe/Bloomberg via Getty Images

Takata, the Japanese company facing billions in liabilities stemming from its defective air bag inflators, is preparing to file for bankruptcy as early as next week as it works toward a deal for financial backing from U.S. auto parts maker Key Safety Systems, sources said on Thursday.

Takata (TKTDY), one of the world’s biggest automotive suppliers, has been working for months to complete a deal with Key Safety.

A person briefed on the matter told Reuters Key was expected to acquire Takata assets as part of a restructuring in bankruptcy.

The Nikkei business daily reported that a new company created under Key will purchase Takata operations for about 180 billion yen ($1.6 billion) and continue supplying air bags, seat belts and other products, leaving liabilities behind in a separate entity.

Takata declined to comment. Michigan-based Key, owned by Chinese supplier Ningbo Joyson, did not immediately respond to a request for comment.

The Tokyo Stock Exchange said on Friday it had suspended trading in shares of Takata following media reports of preparations for a bankruptcy filing. At its previous close, it had a market value of $360 million.

Also at stake is $850 million owed by Takata to major global automakers under a settlement agreed to earlier this year stemming from the automotive industry’s largest ever safety recall.

Sources familiar with the matter, who asked for anonymity because they were not authorized to speak with the media, said a final deal with Key may not be reached before Takata files for bankruptcy. The company plans to begin proceedings in both the United States and Japan, the sources said.

Major global car manufacturers have expressed concern about the company filing for bankruptcy without a deal in place because of disruption it could cause to the production of replacement air bag inflators. More than 65% of 46.2 million recalled Takata air bag inflators in the United States have not been repaired.

A U.S. judge said earlier this year the costs of replacing all of the faulty Takata inflators could be $8 billion.

In January, Takata agreed to plead guilty to criminal wrongdoing and to pay $1 billion to resolve a U.S. Justice Department investigation into ruptures of its air bag inflators linked to at least 16 deaths worldwide. They also have been blamed for more than 180 injuries worldwide.

A federal grand jury in January indicted three former Takata executives for criminal wrongdoing in connection with the safety defect.

Takata has already paid a $25 million fine and $125 million to a victims’ compensation fund, including for future incidents.

For more about Takata and its faulty air bags, watch Fortune’s video:

Takata has until early 2018 to pay the $850 million owed to automakers, or within five days of securing a financial backer. Then-U.S. Attorney Barbara McQuade said in January that if Takata filed for bankruptcy, the Justice Department would be a creditor in the restructuring.

Key was chosen by Takata earlier this year as the favored buyer for the company. Since then, Key has been working with Takata on a restructuring plan.

Inflator recalls began around 2008 and involve around 100 million inflators around the world used in vehicles made by 19 automakers, including Honda (HMC), Ford (F), Volkswagen (VLKPF) and Tesla (TSLA). Recalls are to continue through at least the end of 2019.