How Nike Beat Under Armour in the NBA Finals 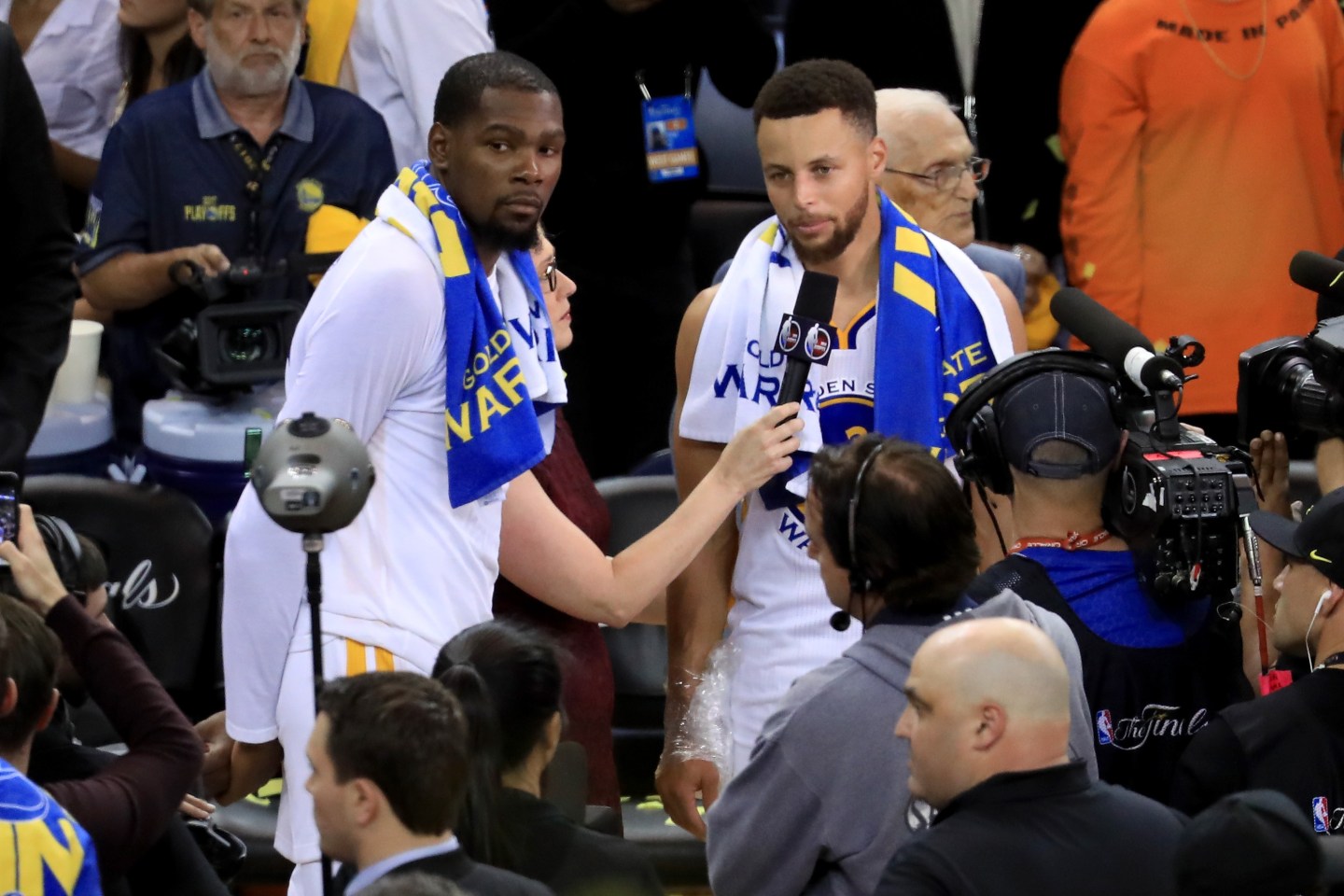 OAKLAND, CA - JUNE 04: Kevin Durant #35 and Stephen Curry #30 of the Golden State Warriors are interviewed following their 132-113 win in Game 2 of the 2017 NBA Finals against the Cleveland Cavaliers at ORACLE Arena on June 4, 2017 in Oakland, California. NOTE TO USER: User expressly acknowledges and agrees that, by downloading and or using this photograph, User is consenting to the terms and conditions of the Getty Images License Agreement. (Photo by Ronald Martinez/Getty Images)
Ronald Martinez—Getty Images

Nike (NKE), the world’s largest athletic-apparel manufacturer, can claim bragging rights because one of the brand’s marquee athletes, Kevin Durant, won his first basketball title with the Warriors and also earned the NBA Finals MVP honor. That’s significant because Nike has built up a sizable shoe business around Durant, most recently debuting the KD10 this spring, a shoe that incorporates Nike’s popular Flyknit technology and a new lacing system.

Smaller rival Under Armour (UAA), meanwhile, can perhaps enjoy the more-muted bump in interest for Stephen Curry, the biggest name in the sport that the Baltimore-based company endorses. Curry also plays on the Warriors and won his second NBA title this year with the victory. But for the second time, he didn’t earn the NBA Finals MVP title (in 2015, he lost out to Andre Iguodala, who is also a Nike-endorsed athlete).

Beyond bragging rights, footwear sales data indicates that Nike is not only far larger than Under Armour, it is also outperforming it. In the most recent quarters, Nike’s North America footwear sales grew 4% to $2.49 billion vs. Under Armour’s global footwear sales of $270 million, up just 2% from a year ago. Under Armour had previously benefited from strong double-digit gains in footwear after historically relying mostly on apparel to boost sales, but the brand has faced some challenges of late as it struggles to create a premium brand that can compete with the likes of Nike and Adidas (ADDYY).

“Last year, we were losing share in basketball in North America and now we’re taking it back,” said Trevor Edwards, president of Nike brand, in a conference call with analysts earlier this year. He said that Durant’s KD9 was among the Nike-made shoes that were driving double-digit market share gains in the $100-$150 price point.

Meanwhile, Curry’s brand has lost some of its luster. Under Armour debuted the company’s first signature basketball shoe for Curry back in the spring of 2015 and since then, he’s become a star player and two-time NBA MVP. The first shoe was very limited, followed by broader distribution and color options for Curry 2.

But Curry 3, which launched late last year, came with high expectations that just weren’t met. “While the Curry 3 plays very well on-court for Stephen Curry and our athletes, a warm consumer reception has led to softer-than-expected results,” Under Armour CEO Kevin Plank told analysts in April. Under Armour has had to work to sell off the high inventory of those shoes.

Plank has promised that for Curry 4 and beyond, Under Armour will sharpen its approach by offering fewer colors and ensuring that the shoes are exclusive in a way that will appeal to sneakerheads. That’s an important pivot because athletic brands have faced some criticism for relying too much on discounting to sell products, putting pressure on price points for the more premium-priced gear like the Curry or Michael Jordan shoes. A sharper distribution plan can come with firmer price points (as long as the player’s brand is still deemed appealing).

Meanwhile, retailer like Foot Locker (FL) have lamented soft sales for the overall basketball shoe category and sales data seems to indicate there are challenges for the once-hot market. Research firm NPD Group earlier this year said performance basketball footwear sales dropped in 2016, while “inspired by basketball”—aka the shoes designed for style and not for sport—actually grew by 27%. That data points to the fact that classic/retro styles continue to sell well, putting pressure on any shoes that are designed with performance in mind, a trend Fortune recently reported on.