Annie Lennox on Feminism: ‘We Intimidate Men Too Much’ 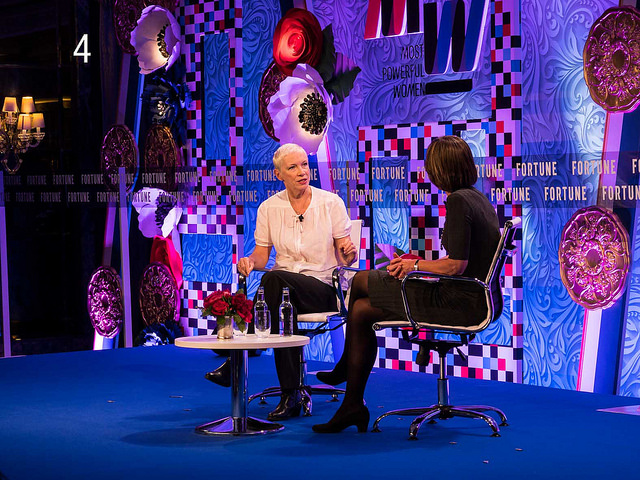 Annie Lennox says she is “proud” to call herself a feminist—and always has—but she has found the movement to be intimidating at times.

Speaking at the Fortune Most Powerful Women International Summit in London on Tuesday, the Eurythmics singer said she encountered a lot of misogynist behavior growing up in the mid-1900s in a working class household in Aberdeen, Scotland, but wasn’t sure how to deal with it.

The only child of a welder father and a mother who was a cook, Lennox said that she wasn’t sure whether to “slap” men down or charm them. “I think you all know what I’m talking about,” she told the audience at the Summit, adding that she found the feminist movement intimidating at times as a teenager.

Lennox continued to say that she thinks men can feel daunted by feminism too. “One flaw is that we intimidate men too much and I think we need to bring them in and have a healthy dialogue,” she said. “My husband is adorable [and a] true feminist… but it took me 53 years to discover that men can be like that.”

The “Sweet Dreams (Are Made of This)” singer, named the Greatest White Soul Singer Alive by VH1, said she believes feminism is about empowering other women, particularly those in developing countries. She compared this to the way the suffragettes sacrificed their lives in the 19th and early-20th centuries so that women in the U.K. could vote. “That fell into my generation’s lap without us having to work too hard for it,” the 62-year-old said.

Lennox, who is a philanthropist, humanitarian, and activist, said she first realized she could use her fame as a platform for good during an interview with the U.S. television talk show host Charlie Rose in the 90s.

“As you’d expect as a women at that time, I had to answer a lot of dumb questions [in interviews],” she told interviewer Pattie Sellers of Fortune. But Rose asked Lennox “probing” questions which made her think, “Wow, if people ask me more intelligent questions I can give them more intelligent answers’.”

“I’d been interviewed thousands and thousands of times, with many [questions] along the lines of my favorite color and mascara,” Lennox continued. “[Charlie’s interview made me think] there’s something more important than my fashion sense. It was just different to other kinds of interviews I’d done before.”

Lennox had the idea to set up her non-profit organization, The Circle, eight years ago, but it didn’t become a formal charity for six more years. “I’d come back from countries where I saw women in denigrated positions in terms of societal value [and I] was desperate to tell the world about it,” she said. “I wanted to create a hub of connection between women focusing on projects in developing countries.”

There are now around eight major Circles operating worldwide, including the Asian Circle, the Italia Circle and the Scottish Circle, in which women come together to share their experiences and harness their skills in the hope of bringing about lasting change. At the moment, the Circles are exclusively made up of women, although Lennox said she “wouldn’t be against having a man’s Circle in any way.”

Lennox has two daughters in their twenties and she said that although in many ways their childhood was easier because “she managed to get some money in the bank,” growing up in today’s social media obsessed world comes with its own set of problems.

“If I was to go back and become a singer-songwriter now I’d be terrified,” she said. “Today, everyone’s a critic—it’s like the Roman Empire but on steroids and I think it’s a very challenging time for young people.” But, she added, “I love the energy of young people and I think the future for feminism lies in the baton being passed down. We must encourage our daughters, sisters and sons to understand fully what feminism means.”