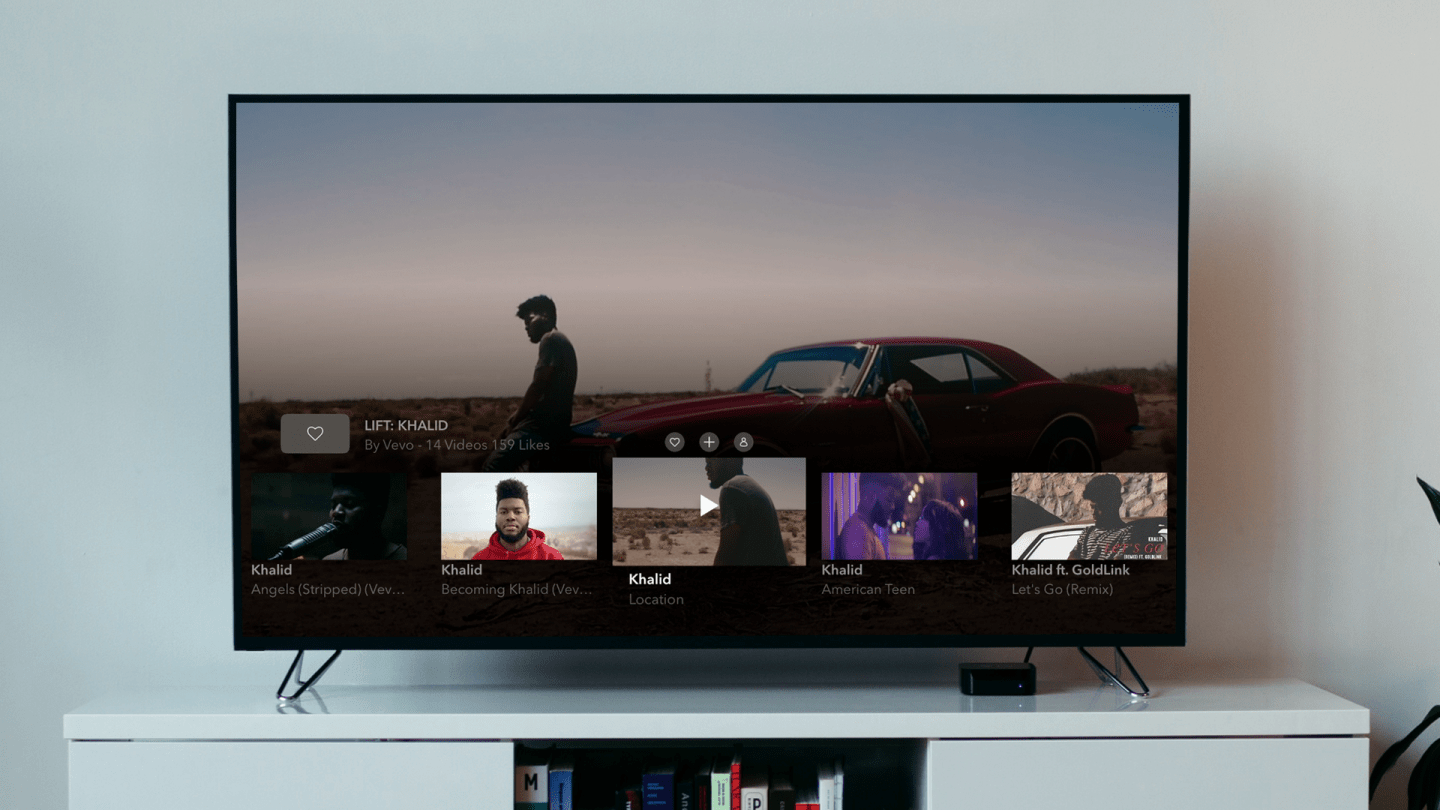 Vevo wants to make it easier for you to watch the music videos you like on your television.

At least, that’s what the online video platform says is behind its new app debuting on Friday exclusively for the tvOS operating system on Apple TV’s set-top box. (Additional devices are coming in the next few months, the company told Fortune.) Vevo, which premiered in 2009 as a joint venture between the major record companies Universal Music Group and Sony Music Entertainment, revealed on Thursday that it has redesigned the design of its streaming app with an eye toward simplifying the navigation of the service’s more than 250,000 music videos and other music-related content while also improving on its ability to offer personalized recommendations based on each user’s tastes.

Vevo’s previous Apple TV app went live last year and the company is also present on a variety of other streaming devices.

“Music videos became a cultural phenomenon through the power and reach of television over the last thirty years,” Vevo CEO Erik Huggers said in a statement. “In recent years, this platform has lacked the rich and immersive experience that a new generation of viewers demand from their connected devices. With Vevo for tvOS, we’ve created an environment that allows the music video to shine once again on the big screen, with an intuitive user interface and new levels of personalization and control.”

The new features that Vevo is highlighting include the ability to browse through video and playlist options via a pop-up navigation bar without interrupting the video users are already streaming on their TV screens. The app also offers curated video and playlist recommendations that evolve as users “like” certain artists and add videos to lists of favorites. The company also teased the fact that Watch Party, Vevo’s social feature that lets several users add songs to one group playlist, will also eventually be incorporated into the Apple TV tvOS app, though the company did not say exactly when that will be available.

Vevo hopes an improved user experience and increased personalization can help the service better compete against other options for streaming music videos, namely YouTube. Vevo already partners with the Google-owned digital video service to post Vevo-branded videos and artist pages for A-list stars like Adele and Justin Bieber that pull in billions of views and are among the most-viewed content on YouTube. (Google even holds a 7% stake in Vevo as part of that partnership.)

In addition to having UMG and SME as majority owners, Vevo signed a partnership with Warner Music Group last year, giving the streaming music video platform access to a vast library of artists and videos from the three biggest recording companies. That access to a wealth of popular music helps drive user engagement to the tune of 23 billion monthly views for Vevo content across all platforms, including YouTube as well as Vevo’s mobile, desktop, and connected TV apps.

For now, the TV app generates revenue through advertising, with users likely to see one ad of about 30 seconds for roughly every 10 minutes they spend viewing content on the app. According to Vevo, the platform’s users have an average engagement time of about 80 minutes spent watching videos. But, Vevo could eventually turn to other revenue models, as well.

In recent months, Huggers has played coy about Vevo’s long-term plans about a potential subscription service, including the possibility of “windowing” certain content by releasing some music videos exclusively on Vevo for a matter of time before sharing them with YouTube. Last year, the company said it planned to introduce a subscription-based service, but Huggers put those plans on hold in February in order to focus on Vevo’s international expansion (the company says 80% of its audience is overseas) and on creating original content. Vevo has been working to expand its selection of original video offerings, which currently consist of live concert series and music-related short videos, such as a recent documentary-style program about the R&B singer Khalid.

Those ideas are still on the table. But, for now, Vevo is focusing on improving the experience its users have watching music videos and other streaming video on their televisions through the redesigned Vevo app. Less than 10% of Vevo’s monthly views come on televisions at the moment, but Vevo says that’s also where it sees the most growth. By continuing to steer more of Vevo’s roughly 100 million monthly active users toward the company’s TV apps, Vevo is betting that it can be the platform that users turn to for music videos streamed to their TVs.

Think MTV for the digital age.