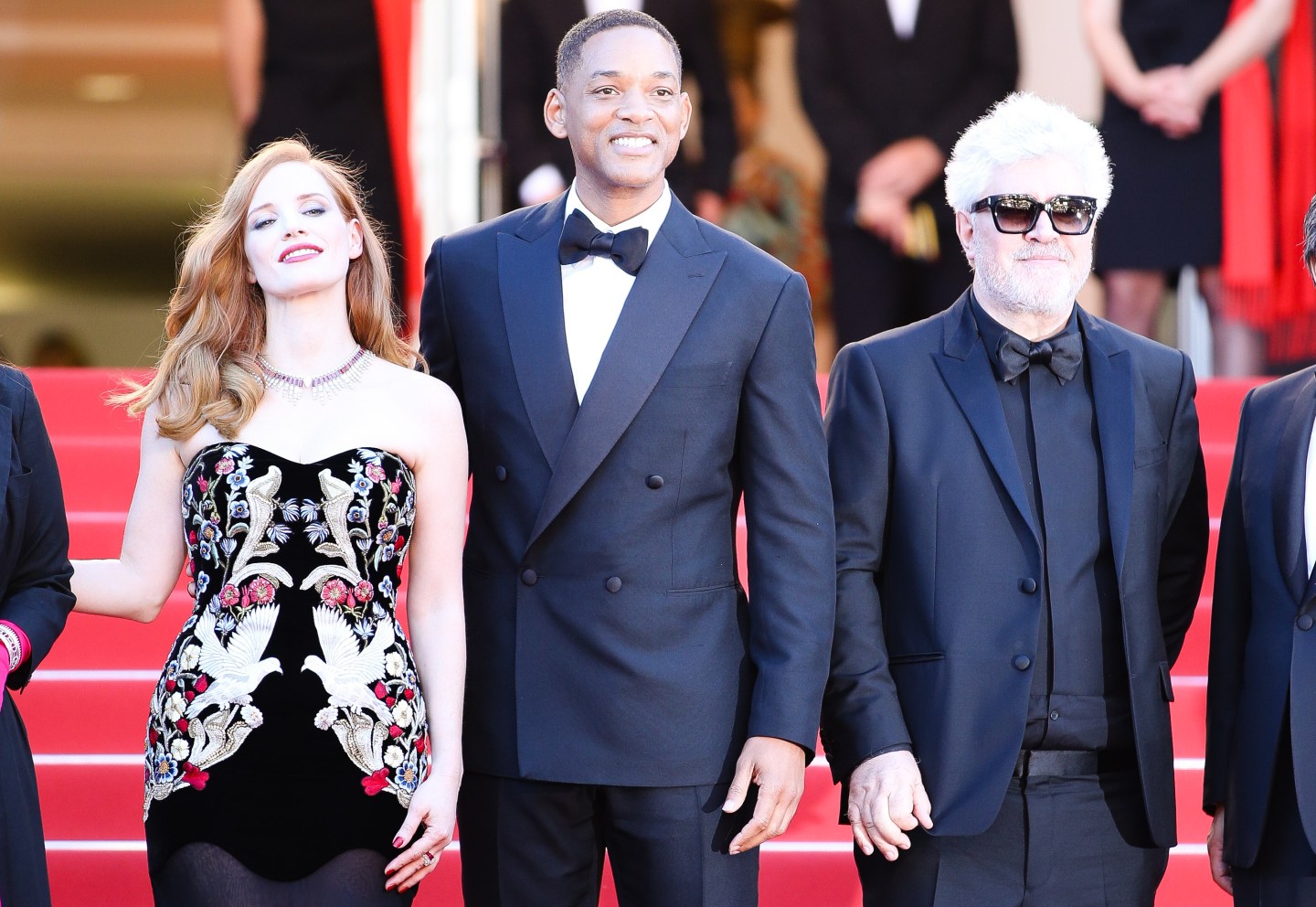 Hollywood’s great streaming debate rages on at France’s prestigious Cannes Film Festival, where Netflix prepares to make its debut for the first (and possibly the last) time.

The festival kicked off on Wednesday with a press event featuring the star-studded Cannes jury—the group that includes A-list actors Will Smith and Jessica Chastain, and which will vote on films competing at this year’s festival. At the press conference, Oscar-winning Spanish director Pedro Almodovar, the Cannes jury president, read a prepared statement that took a swipe at Netflix’s chances of taking home a major award at the festival, where the streaming company has original films competing for the first time ever this year.

“I personally don’t perceive the Palme d’Or [should be] given to a film that is then not seen on the big screen,” Almodovar said, according to The Hollywood Reporter. (The Palme d’Or is the top prize at Cannes). “All this doesn’t mean that I am not open or celebrate new technologies and opportunities, but [as long as] I’m alive I’ll be fighting for the capacity of hypnosis of the large screen for the viewer.”

Not surprisingly, Smith, who is the star of the upcoming Netflix sci-fi fantasy movie Bright, jumped in to defend the massively popular streaming service. Smith offered his alternative take: “I have a 16-year-old and an 18-year-old and a 24-year-old at home. They go to the movies twice a week, and they watch Netflix. There’s very little cross between going to the cinema and watching what they watch on Netflix.”

Smith also argued that services like Netflix give his children access to films and filmmakers they might otherwise not have experienced. “It has broadened my children’s global cinematic comprehension,” the actor said.

Organizers of the annual festival had already muted any excitement over Netflix’s Cannes debut earlier this month when they announced a policy change that takes effect next year and will bar any streaming films from screening at the Cannes festival unless they also have a traditional theatrical release in France. The rule change would seem to make Netflix’s run at Cannes a one-year affair at most, considering that the streaming service has typically eschewed wide releases of its original films in theaters in favor of online-only distribution.

Netflix is still allowed have its two films in competition at Cannes this year: Korean director Bong Joon-ho’s sci-fi drama Okja and Noah Baumbach’s indie drama-comedy The Meyerowitz Stories. And, the company has expressed some willingness to give its original films limited theatrical runs. But, France’ strict regulations require films to wait 36 months after theatrical release to begin streaming online. While Netflix offered to make some concessions to French theater owners in the lead-up to Cannes, there is still a vocal opposition in the French film industry that feels the U.S.-based streaming company is skirting the country’s laws.

So, it comes as little surprise that Almodovar would want to address a topic that has been frequently discussed in the weeks leading up to this year’s festival in Cannes. And, while the acclaimed director of such Spanish-language films as Talk to Her and All About My Mother was careful to not completely disparage the digital medium, his message was clear: digital distribution should not replace traditional theatrical release and streaming companies should have to play by the same rules as traditional film studios.

Almodovar is far from alone in his profession, as many other big-name directors have railed against the possibility of Hollywood moving away from the traditional method of showing new films in theaters for months-long runs before eventually making them available for people to watch at home. At the same time, several other top directors such as Peter Jackson (The Lord of the Rings trilogy) and J.J. Abrams (Star Wars: The Force Awakens) have voiced their support for a revamped business model that would shorten movies’ theatrical window through premium streaming services for first-run films—which is something that even major studios are reportedly discussing themselves.

Meanwhile, Will Smith’s defense of Netflix is also far from surprising, considering that he is in business with the company that paid a reported $90 million to acquire Bright, which will premiere online later this year. That’s a large sum for a movie that is unlikely to show up in theaters, but it’s a drop in the bucket compared to the $6 billion Netflix plans to spend producing original content this year.

In other words, Hollywood’s digital debate is far from over. The more money that Netflix spends to release its own films, and the more the company pits its films against traditional Hollywood products at events like the Cannes Film Festival and the Academy Awards (Netflix won its first Oscars earlier this year for the documentaries 13th and The White Helmets), the more intense the debate over whether Netflix is good for movies and movie-lovers will get.