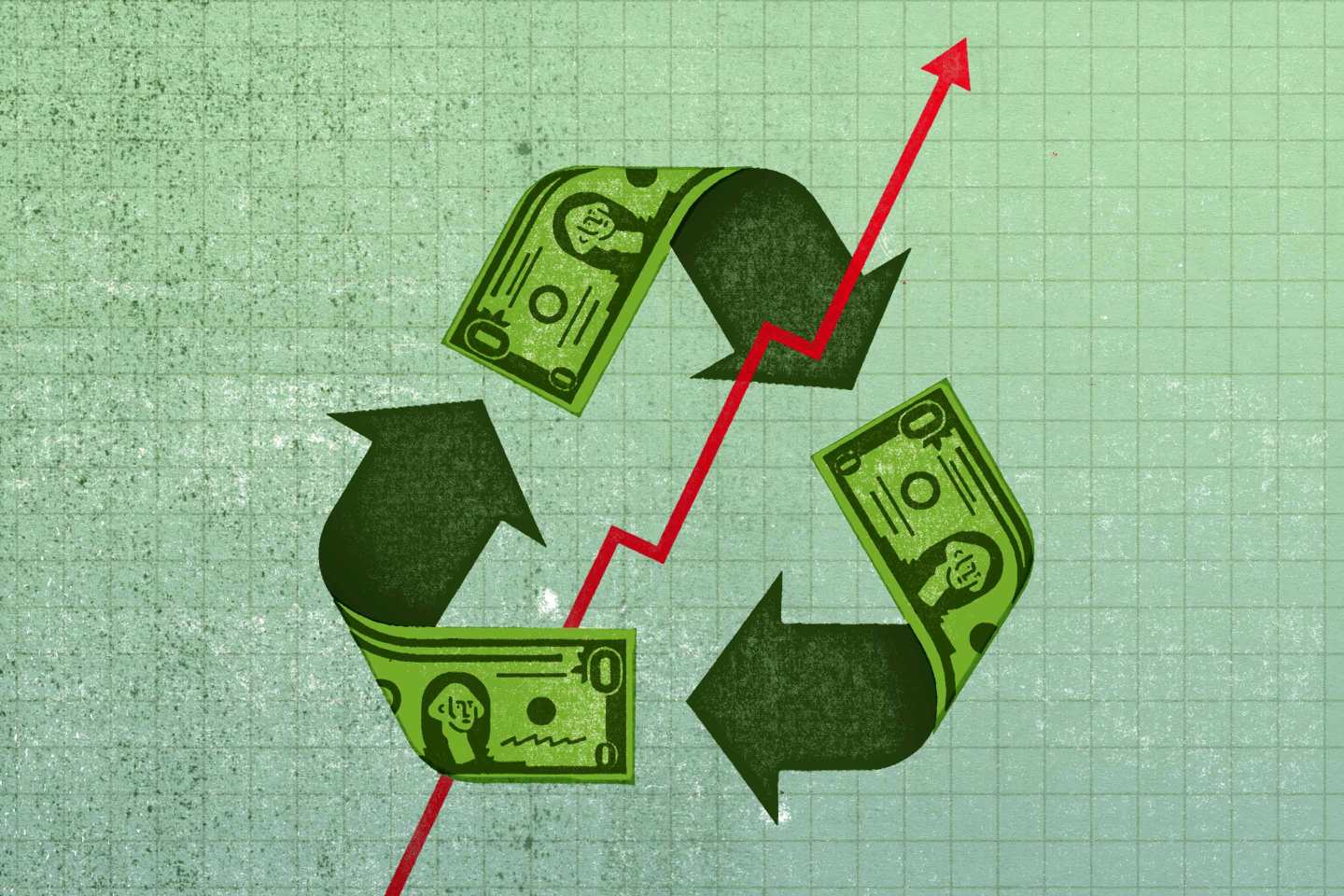 Illustration by Mikey Burton for Fortune

That deal involves the repatriation of $2.5 trillion of profits that American businesses have parked overseas in order to avoid paying the 35% U.S. corporate tax rate. The details are far from settled, but if an agreement coalesces, companies will bring much of that money back to the States, paying a one-time lower tax rate—­whereupon investors expect they’ll return hundreds of billions of dollars to shareholders in the form of stock buybacks. Goldman Sachs analyst David Kostin estimates that the dollar amount of share repurchases could reach $700 billion this year, a 20% increase over 2016, if a tax deal gets done.

Investors, needless to say, are salivating. Anticipation of a buyback bonanza was one factor behind this past winter’s Trump Bump rally. For money pros, repurchases are familiar territory: Big companies routinely use them to mop up excess shares that they’ve issued to raise new capital or as part of executives’ compensation. And under the right circumstances, a buyback can lower a company’s long-term costs and make its stock more desirable.

But before they get giddy about any specific company’s buyback, investors should dig deeper—because lately a buyback has more often than not meant “buyer beware.” Fortuna Advisors, a financial consulting firm that compiles a buyback scorecard, has a particularly sobering assessment of the strategy’s effectiveness. In recent years 71% of the companies in the S&P 500 launched at least one major repurchase program—and on average, by Fortuna’s measure, their returns lagged behind the stock market after the buyback began. “They don’t really help shareholders much,” Fortuna CEO Gregory Milano says of buybacks, and typically “their timing is terrible.”

That’s the opposite of what investors are primed to expect. When a company repurchases stock, investors who sell get an influx of cash. And in theory, as those shares are taken off the market, each remaining share becomes more valuable because future profits will be divided among fewer shares. That’s why companies typically enjoy a stock-price bump after announcing a repurchase: Short-term players rush in to get the payout, while longer-term investors anticipate owning a bigger piece of tomorrow’s earnings pie.

That virtuous cycle plays out, however, only if the stock keeps rising and earnings keep growing—results no company can guarantee, of course. What’s more, while the pace of buybacks has accelerated since 2010, the reasons for the increase aren’t all investor-friendly. Richard Fields of Tapestry Networks has studied buybacks for the Investor Responsibility Research Center Institute: He says many corporate boards prefer repurchases to dividends because a buyback is easier to suspend or alter if a company hits a rough patch. Unlike a dividend cut, a change in the timing of a buyback doesn’t have to be publicly announced and is less likely to spook investors.

Some critics argue that repurchases represent squandered opportunities for growth, since $1 billion spent on buybacks is $1 billion not spent on R&D, acquisitions, or capital investments—or on job creation. University of Massachusetts at Lowell economist William Lazonick argues that some companies’ buybacks are “funding the stock market” through financial engineering to boost the pay of executives who hold stock.

Amid this simmering discontent, Milano and Fortuna have built a mini-franchise around figuring out which companies get the most bang for their buyback buck. Since 2011, they have calculated “buyback ROI,” a company’s annualized rate of return based on a formula that accounts for the cash spent on buybacks, the money it saves by “avoided dividends” on the repurchased shares, and the change in its stock price since the buyback. A strong ROI is a sign of savvy management: It suggests that the company bought stock when it was undervalued and put subsequent savings to good use. A low ROI suggests that the company bought high—something no ­investor likes to hear—and that the money would have been better spent elsewhere.

Fortuna evaluated repurchases in the S&P 500 over the five years through the end of 2016, tracking 353 companies in all. The median buyback ROI for those companies was 11.2% a year. That sounds good—until you realize that the annualized return for the broader market, including dividends, was 14.6% over the same stretch. In other words, investing in a company after a buyback was more likely than not to disappoint you.

Buyback Winners and Losers
The Buyback ROI metric is an indication of whether a share repurchase has proven to be an effective use of the company’s money. Buyback Effectiveness, meanwhile, indicates whether the company bought back stock when the share price was relatively low.

Fortuna Advisors, a financial consulting firm that compiles a buyback scorecard, has a particularly sobering assessment of the strategy’s effectiveness. (To see one of Fortuna’s most recent buyback reports, click here.)

Among companies with low ROI, it’s often true that bad timing is everything. Three of the five worst recent performers (see below) are energy companies whose shares tanked after the buybacks began, as oil and natural-gas prices plunged. Another case in point: clothing company Hanesbrands (HBI). Since the spring of 2015, the company has bought back $731 million in stock. But since then its U.S. sales have fallen amid a general wipeout in clothing retail, and its stock has dropped 40%. Hanesbrands’ buyback ROI: a dismal -18%.

Fortuna has also found that companies that buy back an unusually large percentage of their shares often deliver low ROI. Of the five companies that reduced share count the most via buybacks since 2011, four (Nordstrom, ­McDonald’s, IBM, and media company Discovery Communications) subsequently generated subpar returns. The exception was defense contractor Northrop Grumman. It bought back some $11 billion of stock over the past five years, reducing share count by about 30%. But those moves accompanied a strategic streamlining in response to reduced defense spending. Northrop maintained double-digit profit margins over that span, even as its revenues fell—pleasing investors, who have doubled its stock price over the past three years.

The commonsensical takeaways: A buyback is no guarantee of long-term happiness, and a really big one might even be a red flag. But when a company has promising prospects for growth and its stock is reasonably priced, a buyback can be a nice booster shot to the returns of a long-term investor. With that in mind, we looked at other companies whose recent buybacks have paid off nicely, and spotlighted a few that look likely to continue their recent good runs.

Chipmaker Nvidia (NVDA) topped Fortuna’s ranking, with an ROI of 81%: Not coincidentally, it was the best-performing stock in the S&P 500 in 2016, rising 224%. Nvidia benefited from a 44% increase in its gaming-chip business and also became a darling in the autonomous-vehicle space—you can find its chips in Tesla’s autopilot feature. These technologies are in very early stages, says Craig A. Ellis, an analyst at B. Riley, giving Nvidia room to grow. As part of an ongoing buyback program, the company plans to return $1.25 billion to shareholders this year.

When a company buys back shares, it generally increases the earnings per share for all the remaining stock. But that’s no guarantee that the stock price itself will rise.

A bet on Martin Marietta ­Materials (MLM) (ROI: 35%) is a contrarian bet on bipartisanship. Martin Marietta sells materials used to build highways, including “aggregates” like asphalt. A rare moment of unity in Washington in 2015 led to the $300 billion FAST Act infrastructure bill, and money from FAST projects is now flowing in, says SunTrust Robinson Humphrey analyst Rohit Seth. A Trump infrastructure bill, which could also garner bipartisan support, would offer more of the same. Even if not, sales should be steady: Martin Marietta gets 35% of its $3.6 billion in revenue from Texas, which has among the biggest transportation budgets of any state.

Earlier this year, medical-product-maker Boston Scientific (BSX) (ROI: 33%) had to recall its promising Lotus aortic-valve device from the European market after discovering a flaw. Its market capitalization fell by about $2 billion on the news, according to ­Needham analyst Mike Matson. But that may have created a buying opportunity. The flaw is fixable, and Lotus should return to market this year. Meanwhile, the company’s acquisition of Symetis, a maker of aortic-valve replacement devices, should help spur the already strong growth of Boston Scientific’s cardiovascular division.

The transition of credit cards from “swipe stripe” to chip-and-PIN security systems began in October 2015, but only about 30% of small businesses own machines that accept the upgraded plastic, according to Wedbush’s Moshe Katri. That’s good news for Global Payments (GPN) (ROI: 34%), which sells such gear and has the industry’s largest exposure to the small-business market. Its shares lagged last year amid fears that Brexit would disrupt cross-border transactions in Europe. (Europe accounts for 22% of the company’s $3 billion in revenues.) But those worries have receded, and today, Katri notes, Global Payments’ stock is priced below competitor Vantiv’s even though it’s growing faster.

A version of this article appears in the May 1, 2017 issue of Fortune with the headline “Stocks That Dodge the Buyback Blues.”