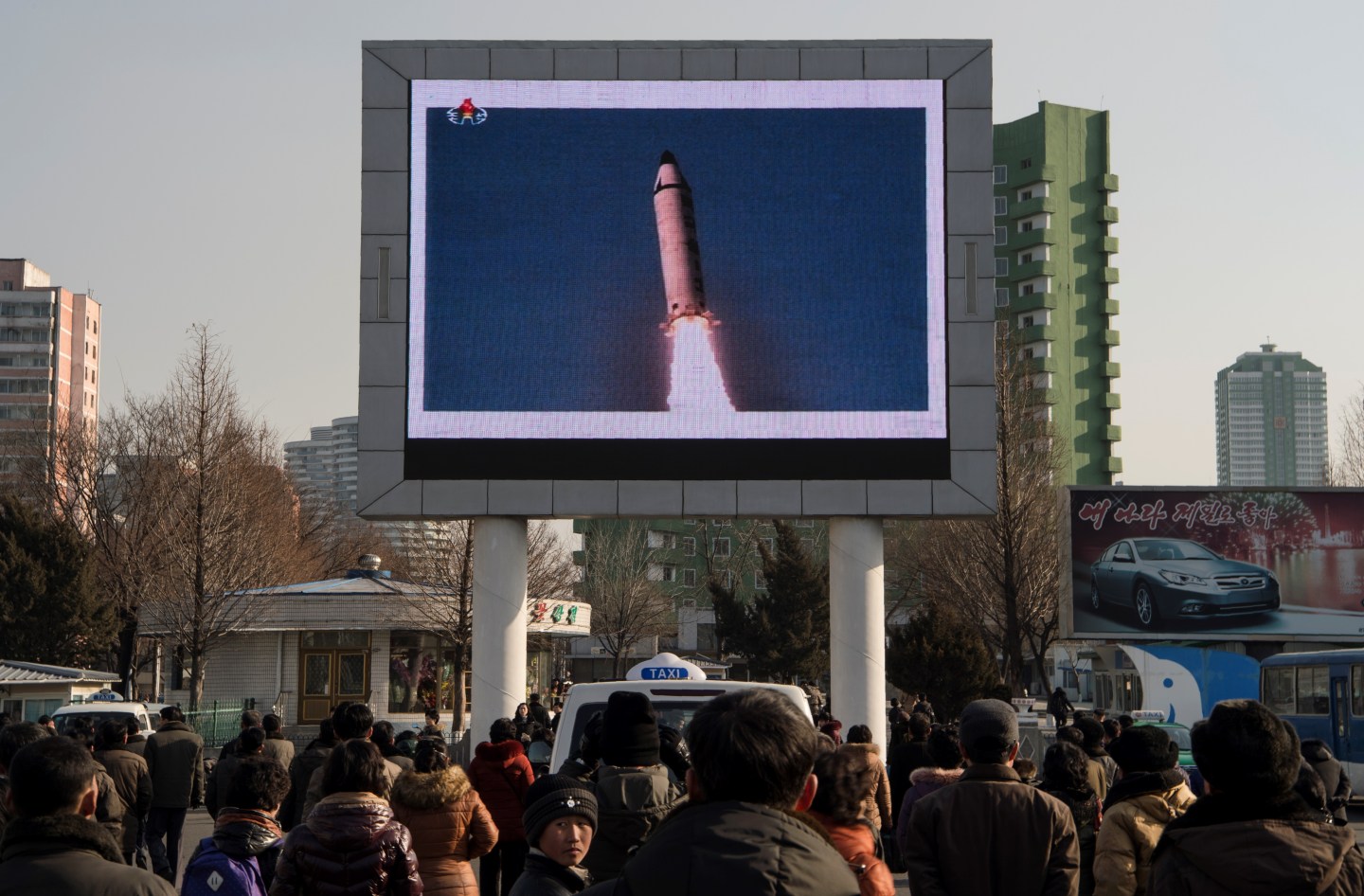 This photo taken on February 13, 2017 shows people in Pyongyang watching a public broadcast about the launch of a surface-to-surface medium long-range ballistic missile.
Kim Won-Jin—AFP/Getty Images

The Trump administration last week warned again that if China does not extract North Korea’s surrender to U.S. demands that Pyongyang abandon its nuclear and missile activities, the administration will “solve” the North Korea problem on its own. But attacking Pyongyang’s nuclear and missile capabilities would almost certainly trigger Seoul’s destruction by North Korean conventional artillery. And targeting North Korea’s massive, heavily protected, and well-hidden artillery assets — even with bigger bombs than previously in the U.S. arsenal—will not destroy enough capability to produce an appreciably better strategic outcome.

Given these realities, the real challenge before the Trump administration is to treat the North Korean nuclear crisis as an opening to put the security of the world’s most economically vital region on a sturdier foundation.

Seizing this opportunity requires cultivating more stable relations among major Asian powers and key external players like the United States — relations that the parties themselves would see as less threatening to their respective core interests. The key to elaborating such relations is serious discussion and diplomacy with China, Japan, and North and South Korea about establishing a reunified Korean state that would be militarily denuclearized and strategically neutral.

Realizing this goal quickly is neither likely nor necessary; the process of shaping a new regional order would itself help stabilize relations among Asia’s major strategic actors. But an end goal of Korea’s reunification as a militarily denuclearized and strategically neutral state is key because of Korea’s historical centrality to Asian security and its rising standing as a regional and even global player.

For at least five centuries, geography has driven Asian powers to compete for influence over the Korean peninsula. From the 1500s, Japanese elites have seen a unified Korea controlled by China as unacceptably threatening to Japan’s security. Chinese elites (imperial, republican, and communist) have seen a unified Korea aligned with hostile powers — Japan or, more recently, the United States — as unacceptably threatening to China’s security.

In the modern era, competition for influence over the peninsula has repeatedly prompted contestation and conflict—e.g., the 1894-1895 Sino-Japanese War, Japan’s 1910-1945 occupation of Korea, the peninsula’s post-World War II division into two states, and the 1950-1953 Korean War. For the past quarter century, this competition has been an essential backdrop to the standoff over Pyongyang’s nuclear and missile programs.

Chronically concerned about security, North Korea is developing nuclear weapons and missile delivery systems that might deter America and its allies from attacking Pyongyang’s core interests. But Pyongyang’s search for deterrence also raises odds of conventional conflict on the peninsula — with growing risks that fighting could escalate to nuclear war. The only solution to this dilemma is negotiated arrangements ensuring Koreans living in the peninsula’s northern part that their strategic independence will not be compromised by outside powers.

South Korea faces its own security dilemma in trying to navigate an ever-shifting line between protecting itself and not provoking its northern neighbor. At the same time, South Korea has already demonstrated the potential of a reunified Korea to emerge as a major regional and even global player. In the late 1950s/early 1960s, South Korea’s per capita GDP was smaller than that of many African countries; today, South Korea is a manufacturing/technological powerhouse with the world’s 11th-largest economy. And even under sanctions and severe international isolation, North Korea has pursued technologically demanding nuclear and missile programs.

Korea’s reunification as a militarily denuclearized, strategically neutral state would let it realize even more of its economic potential. It would also position Korea to rise as a regional power in its own right, able to balance between America and its regional allies, on one side, and China, on the other, contributing to greater long-term regional stability.

China, for its part, faces increasingly acute dilemmas in managing relations with both Pyongyang and Seoul. Beijing has long seen North Korea as a critical buffer against U.S.-allied South Korea’s effective extension to China’s border — a scenario prospectively enabling U.S. troop deployments to that border. Thus, China has declined to squeeze Pyongyang in ways that would put North Korea at risk of collapse, no matter how much Washington wants it to. In recent years, China has also worked hard to build closer economic and political ties to South Korea. But North Korea’s weapons tests are now enabling Washington to expand U.S. military engagement in Northeast Asia (including in South Korea), threatening China’s own security.

To engage China more constructively in resolving the North Korea problem, it is vital to outline a diplomatic path mitigating Beijing’s Korean dilemmas. Seeking a reunified Korea that is militarily denuclearized and strategically neutral is the most promising way to do this. China has even offered a starting point for discussion: its proposal for a halt to North Korean weapons tests in exchange for a halt to U.S.-South Korean military exercises.

Flynt Leverett is professor of international affairs and Asian studies at Penn State and co-author of Going to Tehran: Why America Must Accept the Islamic Republic of Iran. He served in the U.S. government at the National Security Council, on the Secretary of State’s Policy Planning Staff, and as a CIA senior analyst.

Flynt Leverett is professor of international affairs and Asian studies at Penn State and co-author of Going to Tehran: Why America Must Accept the Islamic Republic of Iran. He served in the U.S. government at the National Security Council, on the Secretary of State’s Policy Planning Staff, and as a CIA senior analyst.