France’s Presidential Runoff Is A Victory For Global Business 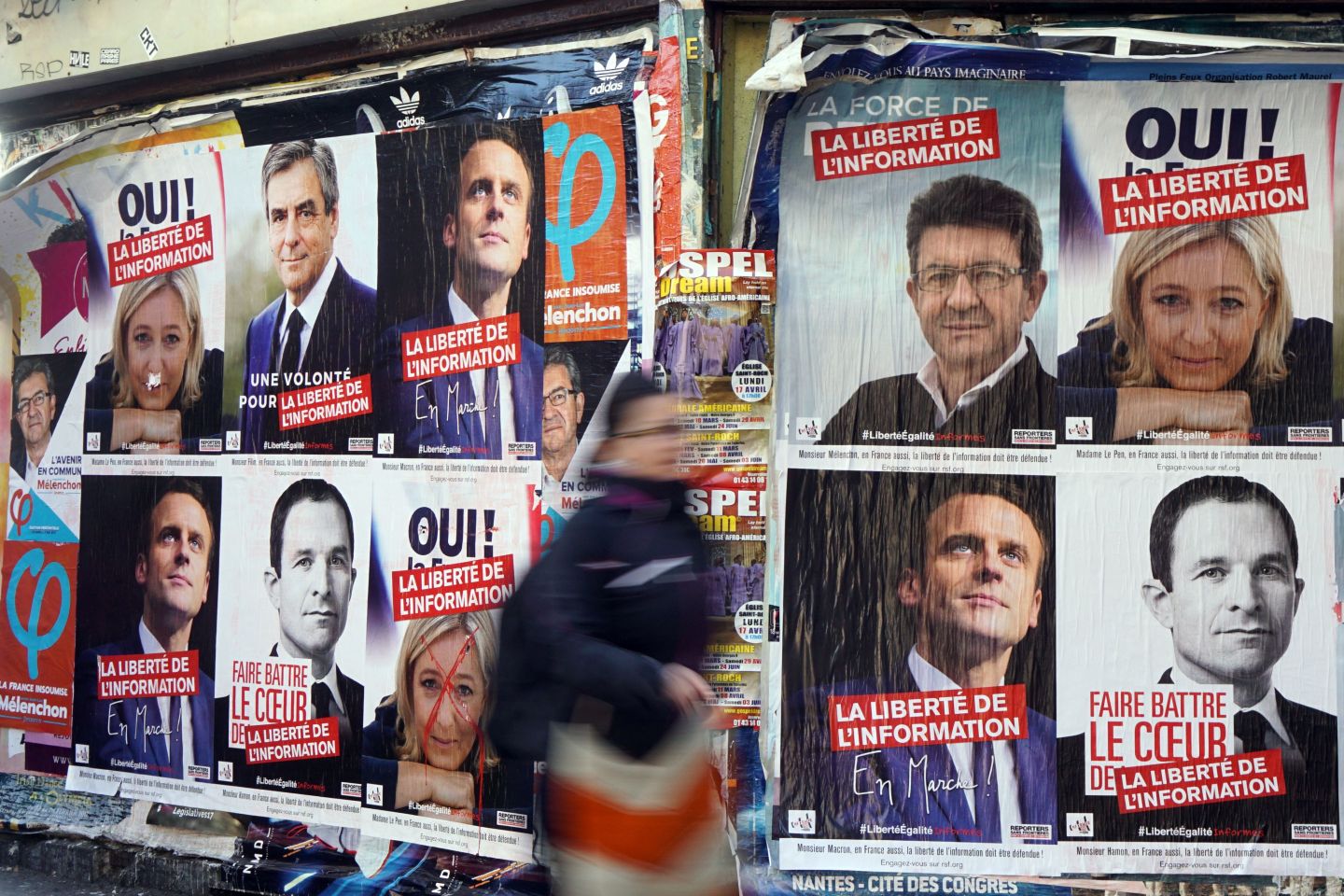 A person walks past posters for "Reporters without borders" that refers to the French presidential election campaign on April 9, 2017 in the district of Montmartre in Paris. / AFP PHOTO / Gabriel Bouys /
Gabriel Bouys — AFP/Getty Images

Preliminary results for Sunday’s French president runoff election set up a stark choice on May 7 between finalist presidential candidates Marine Le Pen’s isolationism and protectionism and Emmanuel Macron’s focus on innovation, entrepreneurship and globalism. As Macron himself said on Sunday, “The French have expressed their desire for change. We’re clearly turning a page in French history.”

Macron represents the politics of hope over fear. He understands that trade and immigration are the best fabric for a flourishing modern economy. His platform calls for a loosening of labor rules, a cut in the corporate tax rate and investments in renewable energy, agriculture and medical technology. As minister of the economy, Macron advocated for new business models, investment in innovation and technology and a more flexible workforce – a strong set of policies on which the French and global technology industries can thrive.

Like President Trump, Macron defied party politics and ideology. In fact, in the past year he simply created his own movement and party, focusing on a pro-growth, pro-business platform. “I make no concessions to conformism,” Macron often says.

He is poised to spur economic growth. Not only does he offer firsthand experience as a successful financier and cabinet minister, but he has also championed French entrepreneurs as well as established companies. When he was an economic minister, I sat in his office in Paris and discussed the importance of innovation and the choking impact of government regulation. I have been honored to host him twice at CES in Las Vegas and at our annual CES Unveiled Paris in 2015 and 2016.

In contrast to Macron, Le Pen advocates for restrictive immigration positions and argues that French citizenship should either be “inherited or merited” – hardline positions that would undoubtedly keep talented workers out of France and hamstring business. Her proposals to tax French companies that hire foreigners and companies that relocate jobs outside of France would make attracting the best and brightest all but impossible for French businesses. Her promise of a referendum to leave the European Union (EU) contrasts with Macron’s promises to “defend the integrity” of the single market.

The demands are high for France’s next president to keep the country safe, jumpstart its economy and improve the domestic labor market. Macron’s experience in business, desire to grow the economy and personal involvement in urging the French to embrace new business models portend well for French economic growth.

Sunday’s first-round presidential vote is an encouraging sign that France will choose progress over protectionism and innovation over repression. The global technology sector should support Macron and his positions, propelling innovation and economic progress into the future.

Gary Shapiro is president and CEO of the Consumer Technology Association (CTA)TM and author of the book, Ninja Innovation: The Ten Killer Strategies of the World’s Most Successful Businesses. His views are his own. Follow him on Twitter @GaryShapiro.