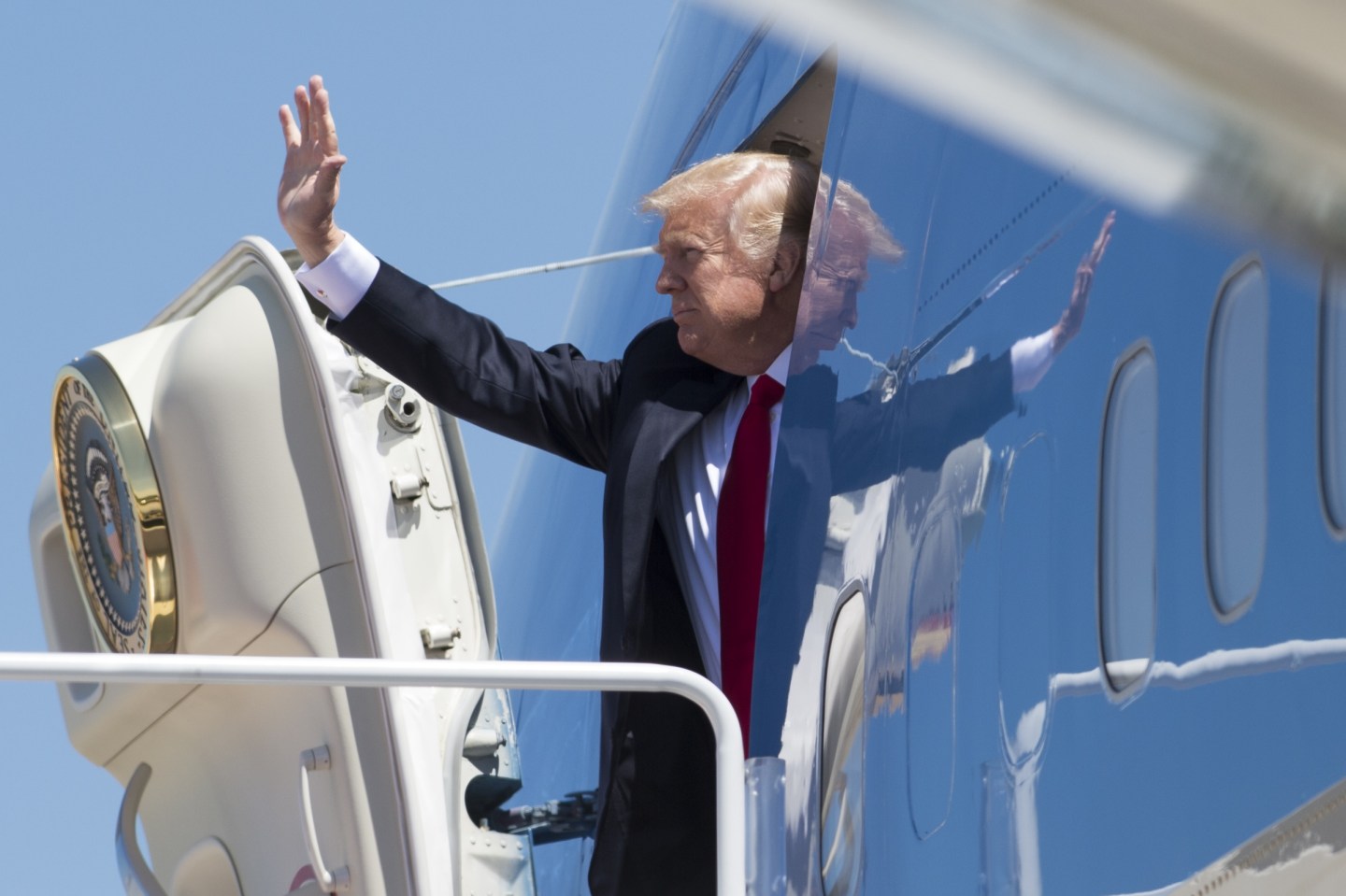 TOPSHOT - US President Donald Trump waves as he boards Air Force One prior to departing from Andrews Air Force Base in Maryland, April 18, 2017, as he travels to Wisconsin. / AFP PHOTO / SAUL LOEB (Photo credit should read SAUL LOEB/AFP/Getty Images)
SAUL LOEB AFP/Getty Images

Last week, the White House announced that the visitor logs recording access to executive branch officials would no longer be public domain information. These logs allowed watchdog groups to monitor lobbyists and donors who have had the opportunity to persuade the president and his staff that their interests should be protected in legislative and administrative action. And while Trump is only reverting to historical practice, closing the White House logs is a serious political miscalculation.

Before President Obama, these records were routinely considered confidential, released only after a presidential term was completed or in response to a successful Freedom of Information Act (FOIA) suit. Obama reversed the presumption of secrecy, releasing more than six million records, but still reserving the right to withhold selected entries.

Legally, the visitor logs can be kept secret. Judicial Watch, a conservative watchdog group, had sued President Obama for some of the records the White House had withheld and was rebuffed in August 2013 when the U.S. Court of Appeals for the D.C. Circuit overturned a district court ruling that all White House logs are subject to FOIA disclosure requirements. Chief Justice Merrick Garland opined, “In both the 1974 FOIA Amendments and the 1978 Presidential Records Act, Congress made clear that it did not want documents like the appointment calendars of the president and his close advisors to be subject to disclosure under FOIA.”

Even the Obama era practice provided far less transparency than watchdog groups were seeking. According to Mark Rozell, dean of the Schar School of Policy and Government at George Mason University and author of Executive Privilege, Obama’s disclosure of lengthy lists of names “enabled the Obama White House to appear to be promoting openness while providing no substantively useful information.” With law and tradition supporting his decision to keep the logs secret (with a modest exception in the Obama years), it might appear Trump is well-positioned to defend his decision.

Additionally, constitutionalists may well applaud Trump’s decision. The Constitution created institutions that partially insulated office holders from popular opinion. Alexander Hamilton argued that the republican principle required accountability to “the deliberate sense of the community,” but rejected presidential “complaisance to every sudden breeze of passion, or to every transient impulse which the people may receive from the arts of men, who flatter their prejudices to betray their interests.” (Federalist #72).

An emphasis on open government and transparency has sometimes eroded the autonomy elected officials need to govern effectively, notably making it more difficult for Congress to make the compromises needed to enact legislation.

There is a strong constitutional case to make against excessive transparency, but Trump is not the president to make it. Trump is a populist president whose authority rests overwhelmingly on the perception that he is the people’s tribune. He is a Twitter (TWTR) president who refuses to allow the media to stand between him and his thus far loyal followers. He has convinced enough voters that he has heard their grievances and that he will not allow politics as usual to stand in the way of advancing their interests. He attacked the Washington establishment for its lack of transparency, and the perception that he is reverting to the ways of Washington will be fatal to his support.

One of the reasons the American Founders preferred a constitutionalist president to a plebiscitary president is that popular support can be fickle and does not provide a stable foundation for sustained executive energy. Be that as it may, Trump has cast his lot with a politics of populism, and he must retain popular support if he is to enact his ambitious domestic agenda.

Fearful that Trump will succumb to politics as usual, his followers want to keep him on a tight leash, and secrecy shields politicians from accountability. Trump faulted Obama for failing to deliver on his pledge of the most transparent presidency in American history, so Trump must now deliver where Obama fell short.