What the Newest Labor Groups Mean For US Workers 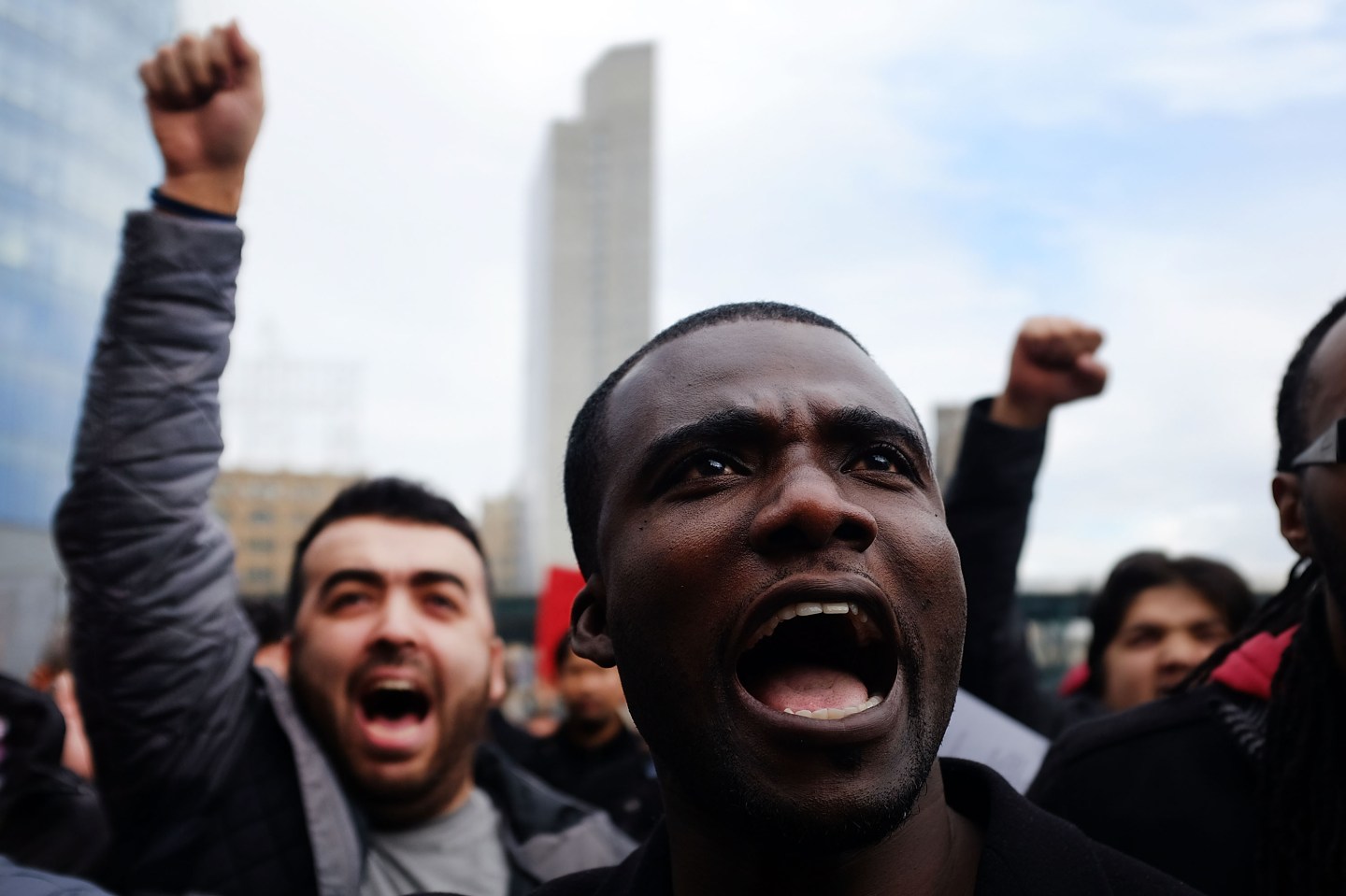 Caption:NEW YORK, NY - FEBRUARY 01: Uber drivers protest the company's recent fare cuts and go on strike in front of the car service's New York offices on February 1, 2016 in New York City. The drivers say Uber continues to cut into their earnings without cutting into its own take from each ride. In claiming fare reduction would mean more work for drivers, the San Francisco based company cut its prices by 15 percent last week. (Photo by Spencer Platt/Getty Images)
Photograph by Spencer Platt — Getty Images

Tensions are mounting this week as the Writers Guild of America attempts to hammer out a new labor agreement with the Alliance of Motion Picture and Television Producers, with scripts being stockpiled in case no contract is reached and the industry shuts down in early May.

Yet a bigger role already is being cast—and it’s for the guild model itself.

Across more and more of the economy, worker advocates are hoping to replicate the ways in which screenwriters, actors, and others in Hollywood have been organized since the 1920s and ’30s.

Driving this development are the exploding ranks of “gig workers,” who don’t have a traditional relationship with a single employer. Many, like those in entertainment, bounce from one project to the next. This includes folks who find assignments via digital platforms such as TaskRabbit and Upwork, as well as day laborers who get picked up on a street corner and are driven to a construction site. Others may work for a particular company (at least for a stretch) but are considered independent contractors, not employees. Uber has become the poster child for this system.

Among the organizations that have emerged in response is the Independent Drivers Guild, an affiliate of the Machinists Union, which represents some 50,000 Uber workers in New York City. A year ago, it negotiated an agreement so that the company would sit down regularly with a committee of drivers for non-binding discussions on how to improve dispatching practices and other matters. As a result of the guild’s efforts, workers who get fired by Uber now have a chance to go through a grievance procedure to try to get their jobs back.

On Monday, the drivers’ guild won another significant victory when New York officials announced a proposed rule that would require Uber to provide a tipping option on its app. A petition by the guild prompted the move, which is meant to help drivers make a living wage.

Determining how many independent workers there are depends on where you draw certain lines. If you count only those whose primary way to earn a living comes from a so-called alternative work arrangement, you get to about 15% of the American labor force. If you add in those who do some kind of gig work on the side at least once a week (supplementing their W-2 tax form with a 1099 in many cases), you get to about 25%. Others broaden the definition even more, maintaining that the freelance workforce amounts to 35% of the U.S. total.

But no matter how you figure it, there is no question that independent work is growing rapidly—and this has experts trying to ensure that those in gig jobs have adequate pay, benefits, standards, and protections.

“High-end Hollywood actors and back-of-the-house restaurant workers have more in common than most people recognize,” says Saket Soni, executive director of the National Guestworker Alliance, which recently launched a project called the Indy Worker Guild to push for economic security for temps, part-timers, and those in gig jobs.

Still, it won’t be easy to follow the Hollywood script. Talented screenwriters and actors are hard to come by, giving them considerable leverage against the studios. By contrast, many other independent workers are in low-wage occupations where the supply of labor is huge and turnover is constant; if someone leaves because of crummy pay or wretched working conditions, the employer can easily tap somebody else to fill the slot.

Hollywood guilds, such as the WGA, are also focused on specific tasks within one industry. Some of the newer guilds are trying to speak for contingent workers of all kinds, making it far more difficult to organize and apply pressure against any one company or sector.

“That’s a challenge,” says Justin Molito, director of organizing for the WGA’s East Coast branch, who nonetheless is “encouraged and excited” by the burst of activity in the space and has even adopted some of the tactics of collective action that the newer guilds are using.

Perhaps most important, unlike the Hollywood guilds, the organizations that are now taking shape are not full-fledged unions with the authority to collectively bargain and go on strike but, rather, looser structures without much actual power to hold employers accountable. (The WGA is just starting to poll its members about authorizing a walkout.) To many old-timers in the union movement, these “alt-labor” associations are thus a meager substitute for the real deal.

Yet those who are calling for these new types of guilds contend that there is little choice but to explore fresh approaches, given that unions have been losing steam for decades amid an increasingly hostile political environment. “Since labor law has mostly been written for those with formal employers, we need to imagine a world where things are different,” says Libby Reder, a fellow at the Aspen Institute’s Future of Work Initiative.

Ideally, she adds, “we need to be pursuing two different strategies”—one that tries to build up and support unions like the WGA and another that seeks to help independent workers through new channels. There can be “guilds with a big ‘G’ and guilds with a small ‘g,’” Reder says.

For the small-g guilds to get anywhere, it’s clear that government must play a crucial part. Among other things, it needs to create—and enforce—mechanisms for businesses that rely on gig workers to put money into a central pot, which can then be used to fund portable health insurance, pensions, and other benefits that people can take with them from job to job. Several states, including New York and Washington, are considering such measures.

Jim Conigliaro Jr., the founder of the Independent Drivers Guild, notes that conditions in New York are perfect for what his organization has been trying to do. There’s a critical mass of people working for Uber in the city and a strong regulatory authority, the Taxi and Limousine Commission, upon which the guild can exert influence to affect change in the industry.

“I don’t claim that this can work across the country,” Conigliaro says.

Indeed, whether guilds like his will become major stars of the economy remains to be seen. Even at this point, though, the cameos are quite intriguing.

Rick Wartzman is senior advisor to the Drucker Institute at Claremont Graduate University. He is also author of the forthcoming book, The End of Loyalty: The Rise and Fall of Good Jobs in America, due May 30.