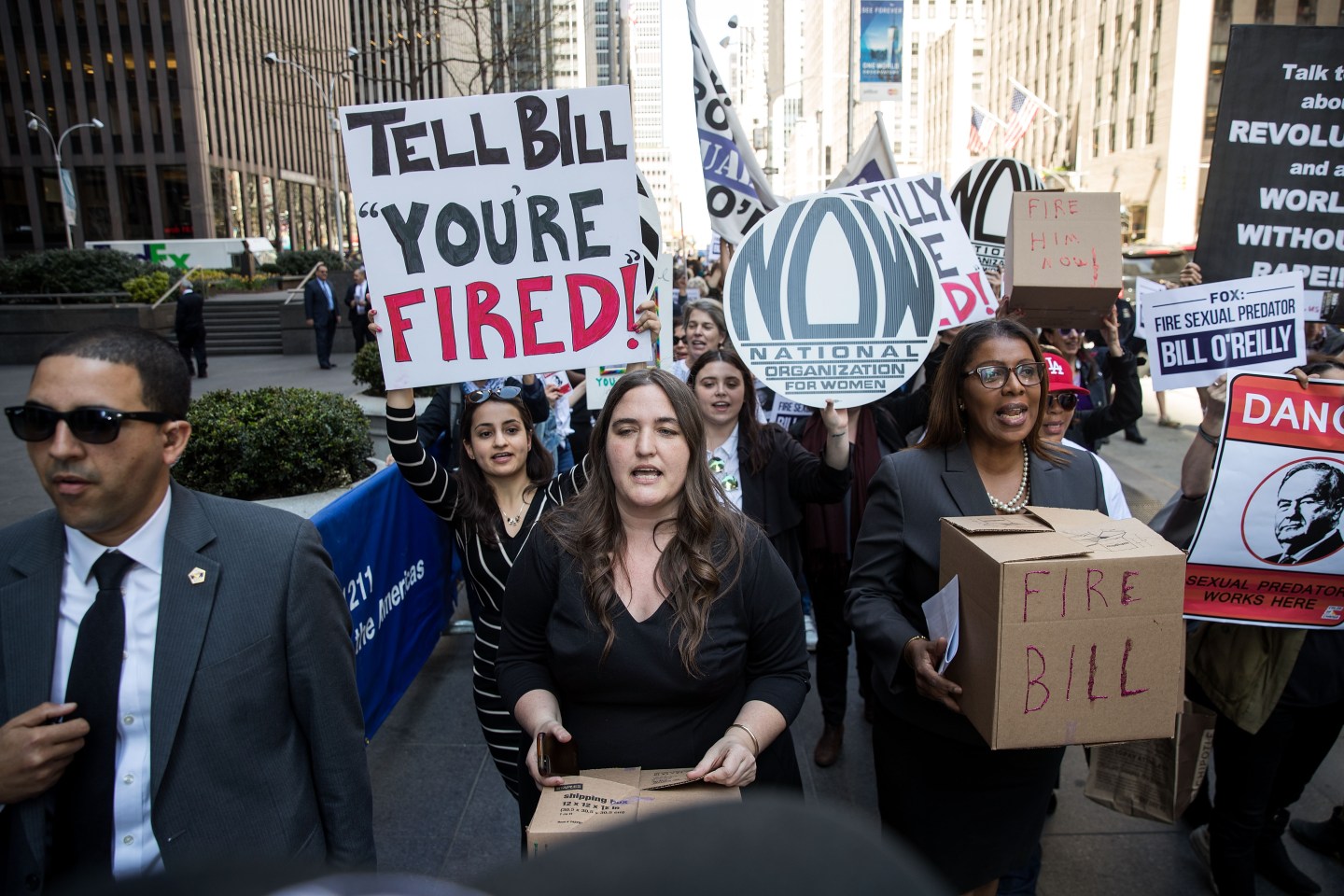 Protesters gathered around Fox News’ headquarters in New York City Tuesday to express their discontent with one of the network’s biggest stars: Bill O’Reilly.

Men and women from UltraViolet—an online community that aims to fight sexism in the workplace and advocate for the National Organization for Women (NOW)—called on the network to fire The O’Reilly Factor host after a New York Times report revealed at least 5 different women have accused him of sexual harassment. Protestors held up signs that read “Tell Bill ‘You’re Fired'” and “Danger: Sexual Predator Works Here,” as well as started a formal petition to get rid of O’Reilly.

So far over 140,000 people have signed it, the organization said.

“The fact they [Fox News’ parent company 21st Century Fox] have spent millions to avoid holding him accountable—it’s outrageous,” said Karin Roland, chief campaigns officer at UltraViolet. “It has perpetuated a culture in which men can commit these crimes and be protected, while women who survive are silenced.”

Many of those who attended the rally shared their personal stories of sexual harassment or assault with Fortune—painful experiences that inspired them to participate in the protest, even though they had not worked at Fox.

“I’m here today because I don’t believe that sexual predators have a place in the American work place,” Joanna Oltman Smith, 47, from Brooklyn, N.Y., said. “I am tired of men’s behavior toward women being excused and normalized as just business as usual— it has a detrimental effect on women’s lives, ability to earn a living, and self esteem.”

Smith added that she has also experienced “a number of work place sexual harassment issues that were not very well addressed.”

She’s not alone. In 2015, a study found that at least 1 in 3 women has been sexually harassed at work, though 71% chose not to report it.

Alex Ortega, 39, who is originally from the Dominican Republic but is now living in Queens, N.Y., said he was sexually assaulted as a young child, and joined the protest because “the child in me says it’s time to speak up.”

“The story of Bill O’Reilly, and him harassing women, and being in a position of power where he can intimidate people really gets to me—part of the reason why I never came forward as a child is because I was intimidated. Now as an adult, I’m able to speak up,” he said. “I’m just really bothered that corporations like Fox News have somebody on their payroll that exemplifies the very nature of the creatures that assaulted me. That’s why I’m here.”

Pearl Brady, 32, from Queens, N.Y., said she has also faced sexual harassment at work, which she described as a “horrible and humiliating experience.”

“Sexual harassment is a form of violence against women. I don’t think paying women to tolerate being sexually assaulted and sexually harassed is a respectable thing,” she said.

The same day of the protest, a new sexual harassment allegation was lodged against O’Reilly.

Fox News did not immediately respond to Fortune‘s request for comment on the protest. But O’Reilly’s attorney Marc E. Kasowitz responded to the new harassment accusation in a statement:

It is outrageous that an allegation from an anonymous person about something that purportedly happened almost a decade ago is being treated as fact, especially where there is obviously an orchestrated campaign by activists and lawyers to destroy Mr. O’Reilly and enrich themselves through publicity driven donations.

Both O’Reilly and Fox have faced backlash since the New York Times published its earlier report, which added that O’Reilly’s accusers were paid a collective $13 million in exchange for their silence. The news came after former chairman, Roger Ailes, stepped down last summer for similar sexual harassment allegations.