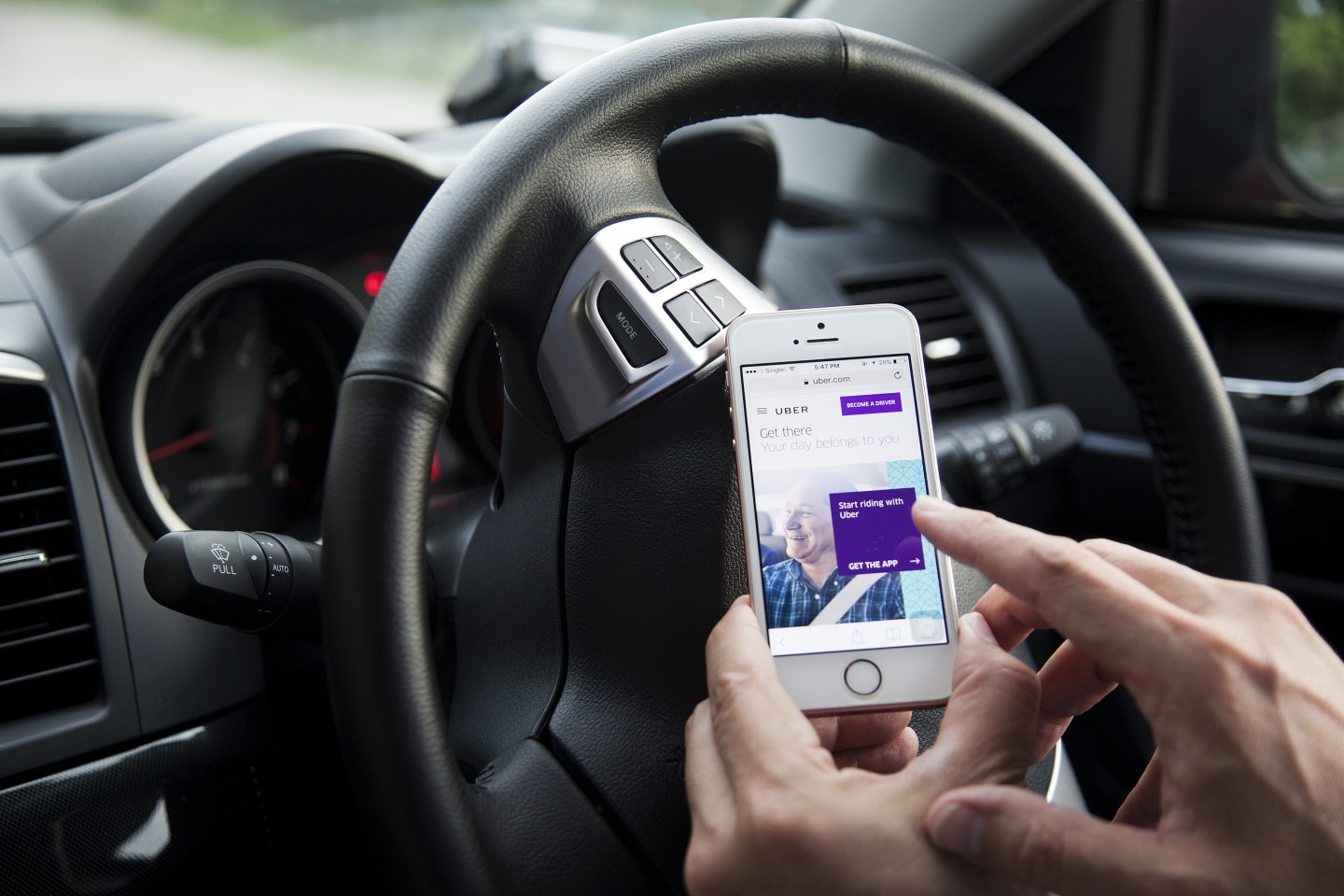 A driver for the Uber Technologies Inc. ride-hailing service uses the company's app on a smartphone in an arranged photograph in Singapore, on Monday, Oct. 31, 2016.
Ore Huiying—Bloomberg/Getty Images

Rachel Bolles, who’s been driving for Uber in the Columbus, Ohio area for just over a year, says her job is about much more than getting passengers from A to B. “I consider myself part nanny, part chauffeur,” she says. “A lot of these people just need someone to talk to.”

That was more true than ever when Bolles picked up a distraught customer coping with the death of his girlfriend’s father. Having recently lost her own father, Bolles empathized and offered advice during the trip. “It was one of those rides you walk away from feeling really good,” she says.

But many observers argue that the approximately 4.5 million Americans who work as professional drivers in the U.S. are at risk of being replaced by self-driving vehicles. Once a far-flung fantasy, the technology is inching closer to reality every day. Silicon Valley firms like Uber and Google, as well as automakers like GM and Ford, view driverless cars as the next holy grail of transportation — and a potentially lucrative market. Already, self-driving cars are picking up passengers in Pittsburgh and Arizona, driverless trucks have made deliveries in Colorado, and London is about to deploy autonomous busses.

Despite self-driving vehicles’ impressive progress, neither Bolles nor any of the half-dozen other rideshare drivers TIME interviewed expressed fear of losing their job to a robotic car any time soon. Some envision themselves working in a different field by the time self-driving technology is ready for primetime, which will likely take several years at least. (Workers, after all, tend to be short-term thinkers.) Others believe the tech may complement, but not completely replace, human drivers. “There’s a lot more to driving than not running into another car,” said Kat Ellery, who also drives for Uber and Lyft in Columbus. “There are a lot of idiosyncrasies that [self-driving cars] can’t account for.”

Such sentiment may seem like denying the inevitable. But self-driving vehicles indeed have their limitations. Bad weather, for instance, remains a roadblock. That means they might be fine in sunny San Diego, but less useful in snowy Buffalo.

Some drivers, meanwhile, argue they’re better than computers at knowing which routes to avoid at certain times, or which side roads to take when the highways are clogged up. Daniel Woermer, a longtime Uber driver in Connecticut, argues that his GPS still doesn’t always immediately reflect changes in road conditions, like when a new divider appears overnight. “An autonomous vehicle, if it’s not updated and doesn’t have that proper knowledge, it could drive right into a barrier,” he says.

Watch This Autonomous Car Drive In the Rain at Night

A fleet of networked, self-driving cars could potentially learn from one another, passing data about new road conditions from one vehicle to the next. However, you would still need that first car to be able to handle an unanticipated circumstance. But adaptability remains a weak point for computers, says Professor John Leonard of The Massachusetts Institute of Technology’s Department of Mechanical Engineering: “The capacity for human intelligence, to deal with the unexpected and to use what we call common sense knowledge to handle situations for which they weren’t trained, those things are hard for a robot to do.”

Some Uber drivers also argue they play the role of babysitter by making sure their passengers aren’t mistreating their vehicle. “[If you’re] spilling coffee, a driver might say you can’t eat in here,” says Julian Jackson, who also drives for Uber in Columbus. “If you realize that someone is watching, then you might end up being a little more respectful of other people’s things.”

Ultimately, the biggest factor holding back self-driving cars may not be technology, but passengers. “There are a lot of people out there who wouldn’t trust a self-driving car,” says Carl Johnson, an Uber driver in Kansas City, Mo. That’s true no matter how studies show autonomous cars are more capable than human drivers. (One report from McKinsey and Company estimated that driverless cars could reduce automotive accidents by 90%.) Of course, that sentiment may change as self-driving cars become a more typical element of everyday life.

Despite these drivers’ confidence, it may not be wise for a young person today to bank on a lifelong rideshare career tomorrow. Uber executives in particular have not been shy about their pursuit of self-driving cars, which don’t clamor for higher fares or attempt to unionize. So far, the company has tested its autonomous vehicles in Pittsburgh, Tempe, Ariz., and its hometown of San Francisco. (Rival Lyft says it plans to deploy autonomous cars around 2021 or 2022.) But Uber’s self-driving progress hasn’t come without setbacks. A recent crash in Arizona, clashes with state regulators, and an ongoing and increasingly nasty legal battle with Google parent company Alphabet have all highlighted just how far it and other companies have to go before robots are zipping us around town.

Regardless of how drivers might feel, it’s increasingly likely that autonomous cars will make up some portion of tomorrow’s transportation landscape. But that world is far enough away that most professional drivers aren’t feeling the heat — yet. Some, like Johnson, are even ready to embrace such a future. “I think it’s a great idea,” he says. “I seriously believe there will be one day where we’re going to be like The Jetsons.”