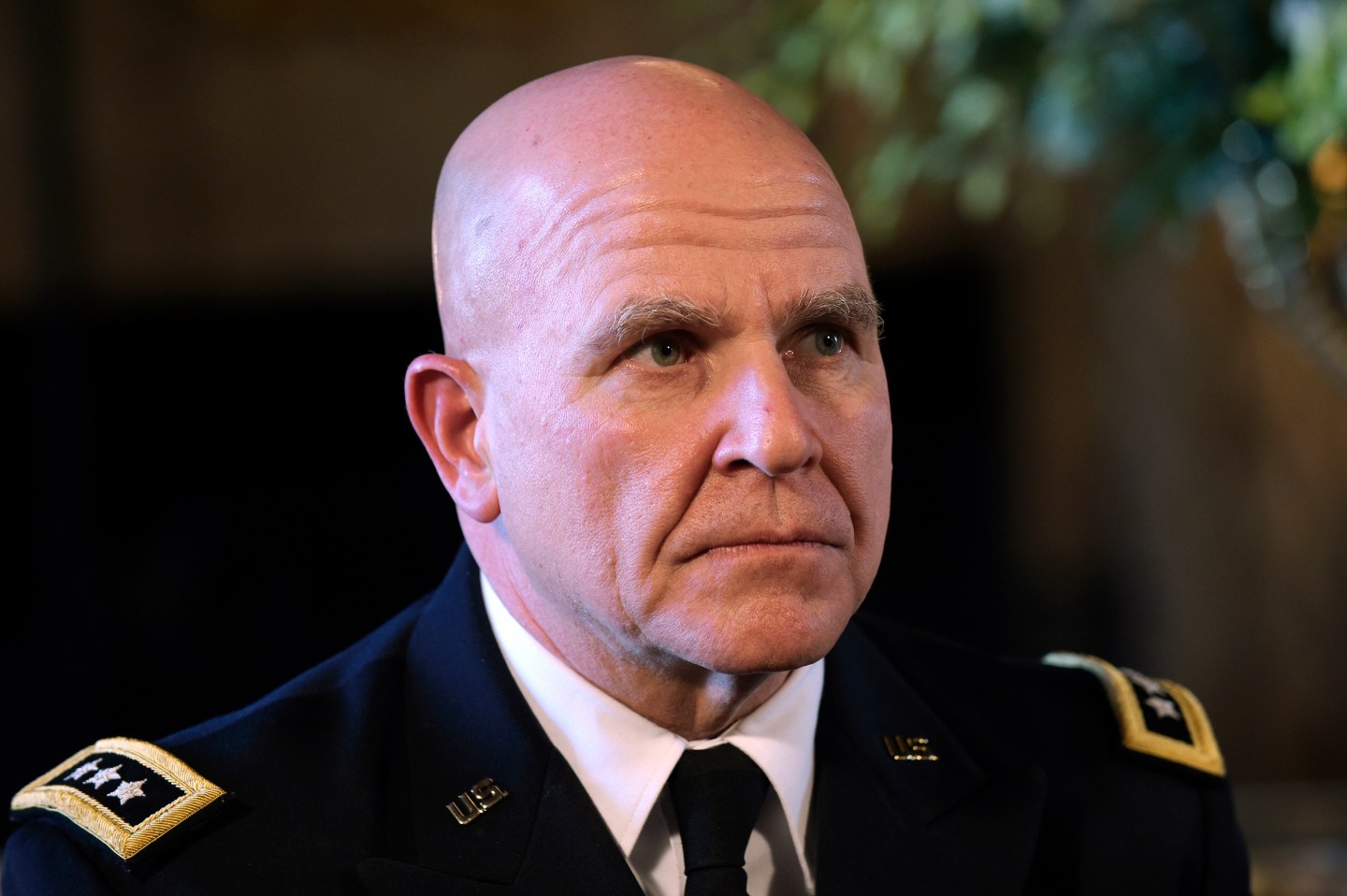 In his first televised interview, H.R. McMaster pointed to dual U.S. goals of defeating the Islamic State group and removing Assad. But he suggested that Trump was seeking a global political response for regime change from U.S. allies as well as Russia, which he said needed to reevaluate its support of Syria.

“It’s very difficult to understand how a political solution could result from the continuation of the Assad regime,” McMaster said. “Now, we are not saying that we are the ones who are going to effect that change. What we are saying is, other countries have to ask themselves some hard questions. Russia should ask themselves, …Why are we supporting this murderous regime that is committing mass murder of its own population?”

After last Tuesday’s chemical attack in Syria, Trump said his attitude toward Assad “has changed very much” and Secretary of State Rex Tillerson said “steps are underway” to organize a coalition to remove him from power.

But as lawmakers called on Trump to consult with Congress on any future military strikes and a longer-term strategy on Syria, Trump administration officials sent mixed signals on the scope of U.S. involvement. While Nikki Haley, the U.S. ambassador to the United Nations, described regime change in Syria as a U.S. priority and inevitable, Tillerson suggested that last week’s American airstrikes in retaliation for the chemical attack hadn’t really changed U.S. priorities toward ousting Assad.

Pressed to clarify, McMaster said the goals of fighting IS and ousting Syria’s president were somewhat “simultaneous” and that the objective of the missile strike was to send a “strong political message to Assad.” He did not rule out additional strikes if Assad continued to engage in atrocities against rebel forces with either chemical or conventional weapons.

“We are prepared to do more,” he said. “The president will make whatever decision he thinks is in the best interest of the American people.”

U.S. Military Officials Are Looking Into Whether Russia Participated In Syria Chemical Attack

Reluctant to put significant troops on the ground in Syria, the U.S. for years has struggled to prevent Assad from strengthening his hold on power.

U.S.-backed rebels groups have long pleaded for more U.S. intervention and complained that Washington has only fought the Islamic State group. So Trump’s decision to launch the strikes — which President Barack Obama declined to do after a 2013 chemical attack — has raised optimism among rebels that Trump will more directly confront Assad.

Several lawmakers said Sunday that decision shouldn’t entirely be up to Trump.

Sen. John Cornyn of Texas, the no. 2 Republican in the Senate, praised Trump’s initial missile strike for sending a message to Assad, Russia, Iran and North Korea that “there’s a new administration in charge.” But he said Trump now needed to work with Congress to set a future course.

“Congress needs to work with the president to try and deal with this long-term strategy, lack of strategy, really, in Syria,” he said. “We haven’t had one for six years during the Obama administration, and 400,000 civilians have died and millions of people have been displaced internally and externally in Europe and elsewhere.”

Tillerson Says Missile Strikes Carry a Message for Others

Maryland Sen. Ben Cardin, the top Democrat on the Senate Foreign Relations Committee, agreed. “What we saw was a reaction to the use of chemical weapons, something I think many of us supported,” he said. “But what we did not see is a coherent policy on how we’re going to deal with the civil war and also deal with ISIS.”

Their comments came as Tillerson was making the Trump administration’s first official trip this week to Russia, a staunch Assad ally. In interviews broadcast Sunday, Tillerson said defeating the Islamic State group remains the top focus. Once that threat “has been reduced or eliminated, I think we can turn our attention directly to stabilizing the situation in Syria,” he said.

“We’re hopeful that we can prevent a continuation of the civil war and that we can bring the parties to the table to begin the process of political discussions” between the Assad government and various rebel groups.

The hope, he said, is that “we can navigate a political outcome in which the Syrian people, in fact, will determine Bashar al-Assad’s fate and his legitimacy.”

Haley said “getting Assad out is not the only priority” and that countering Iran’s influence in Syria was another. Still, Haley said the U.S. didn’t see a peaceful future Syria with Assad in power.

McMaster, Cornyn and Cardin spoke on “Fox News Sunday,” Tillerson appeared on ABC’s This Week and CBS’ Face the Nation, Haley and Graham were on NBC’s Meet the Press and Haley also appeared on CNN’s State of the Union.