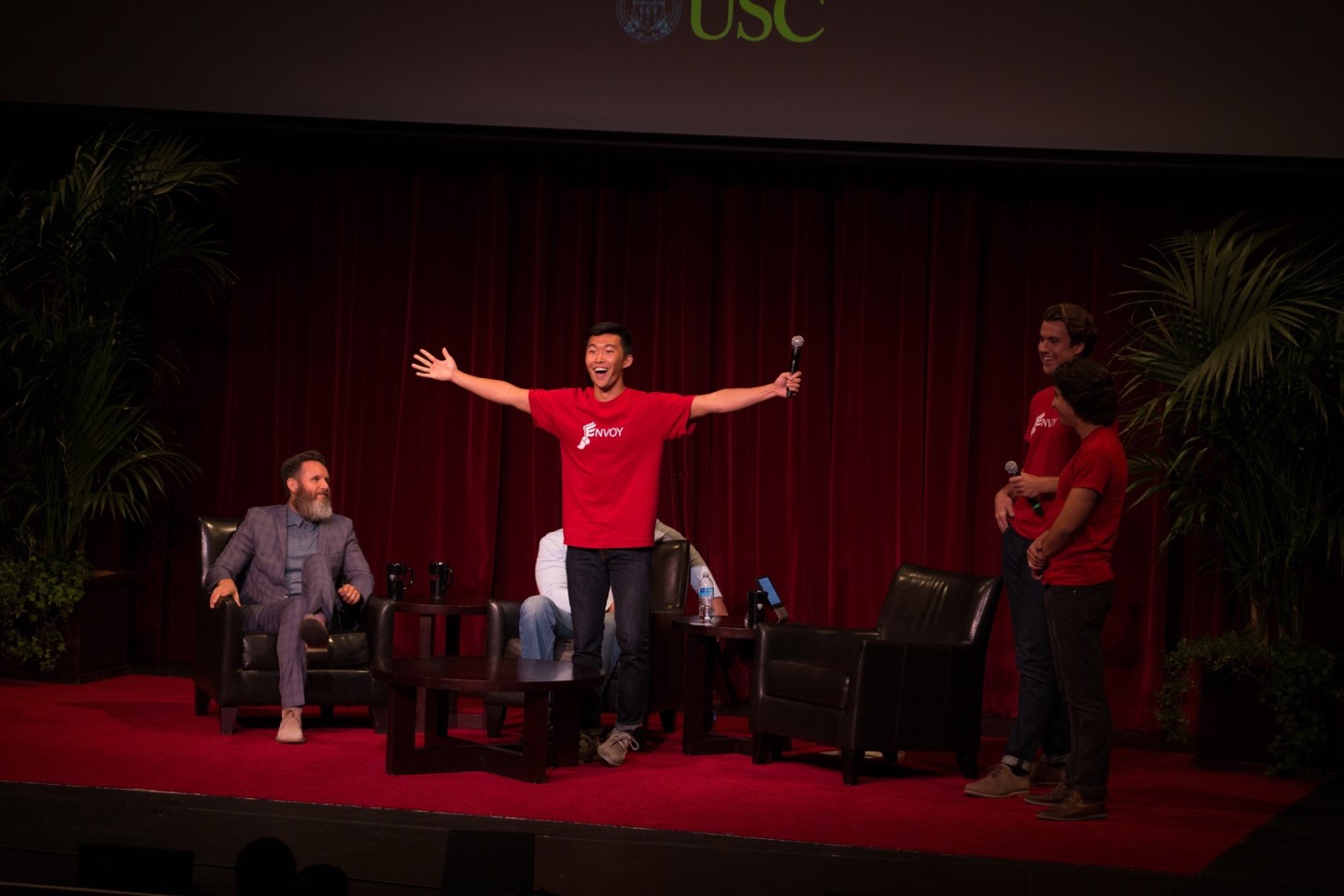 One moment is all it took to separate Anthony Zhang’s life into two distinct parts.

In the first part, he was a 21-year-old entrepreneur who had recently quit college after winning a $100,000 grant to grow his food-delivery startup.

In the second, he was a 21-year-old quadriplegic coping with the realization that he might never walk again.

Today, he celebrates a new milestone that fuses both parts of his life: announcing the sale of the company that once defined him and figuring out what comes next.

The ‘most valuable case study’

When Zhang, now 22, describes his life as a student at the University of Southern California, it sounds almost clichéd. He was the fraternity kid with the easy confidence, the charming smile, and a business run out of his dorm room.

As freshmen, Zhang and four of his USC buddies had come up with a solution to a common student problem: getting food delivered to campus buildings where only staff and students are allowed. As an alternative to having students ditch their prized library spots to meet delivery people at the door, Zhang posted flyers telling students they could text him their order, Venmo him the money, and get the food delivered to their exact location on campus. It started small. Zhang alone was making upwards of $50 a night delivering Chipotle and Chick-Fil-A directly to dorm rooms and study lounges. He and his friends called their service EnvoyNow.

That was 2014. Over the course of the year, they got serious about building this texting service into a full-fledged business. They launched EnvoyNow as a web platform and hired several college students (“envoys”) to begin fulfilling orders. The company made money by charging the user a flat $2.99 delivery fee and taking a 20 to 25% cut per order from the restaurant. In its first semester of operation, the startup took in $22,000 in revenue. By 2015, it had expanded to the University of Wisconsin and Indiana University.

For Zhang, the experience was becoming more relevant than his coursework. “I was taking advanced finance and reading case studies, and I was like, ‘What I’m doing right now is the most valuable case study of all,’” he says. “I’m learning the operations and the struggles of a business firsthand, and I don’t need to read some Harvard Business School case study from 30 years ago to learn that.”

Shortly after, Envoy was recognized by Inc. as one of the coolest college startups, and Zhang pitched the company to Mark Cuban during an impromptu Shark Tank event on campus. Later that year, Envoy was accepted into the 500 Startups accelerator program in Mountain View, Calif., and Zhang was selected to join the Thiel Fellowship, a two-year grant program that gives young entrepreneurs $100,000 to drop out of school and grow their business.

By 2016, Zhang had dropped out of USC to begin fundraising for Envoy’s seed round. He had just secured $1.5 million in venture capital when he decided to go to his fraternity’s spring formal at a hotel in Las Vegas. “It was pretty early in the night, and the party hadn’t even started,” he says. “I wasn’t drunk, I was just having fun.”

He remembers hanging out with his friends. He remembers diving into a pool. He then remembers holding his breath, unable to move.

His girlfriend McKenna Weinstein was there that night, and she still gets emotional when she remembers seeing Zhang getting pulled out of the pool by a friend. “It was really scary to see him laying there, and he can’t really move or feel or anything like that,” she says. “It was just really scary.” (A lawyer for the hotel declined to comment.)

Waking up in an intensive care unit, Zhang found out he had suffered a spinal cord injury that left him paralyzed from the neck down. He was hooked up to machines and had tubes down his throat.

One month and several surgeries later, he was transferred to a rehabilitation facility in Denver. It was at Craig Hospital where he truly began to understand the gravity of the situation. His goal was no longer to build the company; it was to breathe without a ventilator and sit up without getting nauseous. It was to take a sip of water — something he wasn’t able to do for six weeks after his injury.

“This business had come to define me,” he says. “It wasn’t my priority anymore.”

By August 2016, Zhang had gotten strong enough to hold an adaptive eating utensil and feed himself. He had transitioned from an electric wheelchair to a manual one, and was feeling more and more independent. He moved in with his girlfriend and her family at their home in Newport Beach, Calif.

Though he was spending four to five hours per day in outpatient therapy, he began to get re-involved in Envoy by remotely listening in on company meetings. A month later, he was ready to get back to building his business. But Envoy’s two remaining co-founders had other plans for the business: they wanted to shut it down, Zhang says. (They declined to comment.)

While Zhang had been recovering, Envoy wasn’t making progress, according to Zhang. He says there were several issues at play: for one, Zhang had been the point person for investors, and in his absence, his co-founders reportedly struggled with their new responsibilities. There was a lack of direction, he says, and a change in the vibe and culture.

“It was a big hit to me because I had just gotten back to find out everyone was feeling really dejected,” Zhang says. “It was the first time in a while that I felt energy or motivation for the company because it was now in crisis mode.”

Zhang was trying to remain optimistic about the future of his company, but it was becoming increasingly hard to do so. With his co-founders gone and his team with no direction, it came down to two options: shut down or sell.

He chose the latter and asked several Envoy staffers to take on more responsibility in order to cover the loss of the executive team. He appointed Envoy staffers Akshay Aggarwal and Grant Shuler as the interim CTO and COO, respectively. With the start of the the school year in September, Zhang began to execute on his plan to launch on new campuses. The service expanded to a total of 16 schools with more than 1,500 student employees nationwide.

As CEO, he was hyperfocused on improving morale and revitalizing the culture at his company. He implemented a new system where Envoy’s campuses competed with one another for the most orders per week. The campus managers got into it, he says, because of “the fantasy football-like friendly competition.”

As Envoy gained momentum, Zhang turned to advisers who navigated him through the process of selling his first company.

Blake Masters, president of the Thiel Foundation, was one of those people. Masters describes the conversations with Zhang following the accident as “startlingly positive.” Zhang would ask him for advice about possible sale strategies and other business matters. It was all about the company. “And I’m just like, ‘Whoa. Cool, let’s jam on that, but how are you? How’s the recovery?’”

It became clear that Zhang was laser-focused on getting Envoy on solid ground again. “Good luck finding something that will hold him back,” Masters says.

On Thursday, he announced the sale of Envoy’s operations, including its customer base, campus marketing teams and logo, to food delivery startup JoyRun for an undisclosed amount. Three former Envoy executives – Zhang, Shuler, and Envoy’s former head of sales Jason Bartlett – will be moving on to head up growth at JoyRun.

The sale marks a huge victory for the young entrepreneur and those closest to him. His girlfriend of two years was there when he launched his business, she was there that life-changing night in Vegas, and she’s there today. “It’s a dream come true for him under very different circumstances,” Weinstein says.

Though Zhang figured out a way to lead his company to an exit, he is still learning to deal with the aftermath of his injury. It’s not the big, obvious challenges, he says, it’s the small ones that continue to catch him off guard. There are the logistical life adjustments like, “Will there be steps at the venue,” to the psychological ones like, “I won’t be able to look at people at eye-level.”

“I feel like mentally, I’m 100%, but it’s still hard to see a life outside of just being in a wheelchair,” he says. “It’s about learning to treat yourself as a whole person even though your body is broken down.”

Zhang’s body may be “broken down,” but it’s clear that his spirit is still intact. A year later, he has regained some motor function in his arms with enough strength to push himself in the wheelchair for prolonged periods of time, and he’s working on feeding himself without an adaptive eating utensil. Though Zhang says it took him months to get past the dark days following his injury, he passionately talks about his recovery and is confident he’ll be able to stand and walk once again.

During his time spent in hospitals and rehab centers, Zhang was busy thinking like an entrepreneur. He’s noticed “wildly inefficient” processes in the health care system that could be improved upon using technology. Even after everything he’s been through with his first company, Zhang doesn’t hesitate to answer when asked if he plans to start another company someday.

“Being at the reins of something is the best feeling ever,” he says. “I’ve got a notebook full of ideas.”