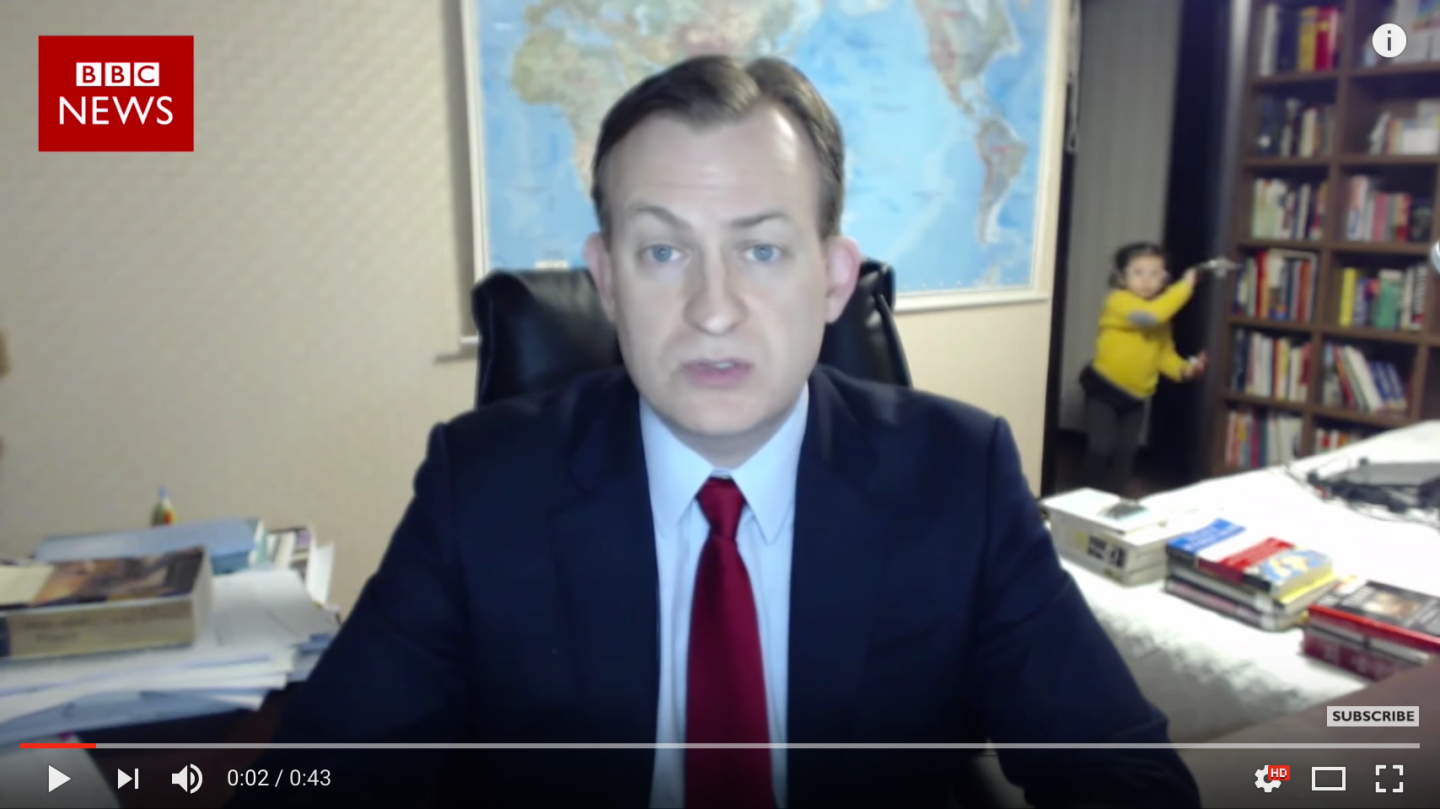 A video of every work-from-home parent’s nightmare has gone viral—very viral.

Robert Kelly, Pusan National University professor of political science, was deep in a discussion about the ousting of South Korea’s President Park Geun-hye via videoconference with a BBC anchor. Suddenly, the door behind him swings open and in sashays a bespectacled little girl of no more than three or four years old. All yellow shirt and ponytails, she sidles up next to Daddy to see what he’s doing. Soon, her infant sibling, tooling around in a walker with wheels, follows behind.

As the scene unfolds, followed by a frantic woman who races in to retrieve the errant tots from what we can now see is a bedroom carefully staged to look like an office. You can almost see the thought bubbles over Kelly’s head:

Wait—was that the door? Oh, sweet Jesus, that was the door.

If I just move her back gently, maybe she’ll be out of the view of the webcam. Now? No? How about now? NOW THE OTHER ONE IS HERE, TOO? Are you KIDDING me?

When the scene disrupts the interview, Kelly is caught between laughter and apology. The anchor is good-natured, and once the door swings shut, with the kids wailing in the background, Kelly doesn’t miss a beat and finishes his thought. While others’ reactions included anger that he didn’t cuddle his visiting daughter or concern at how abruptly the kids were removed or annoyance at the woman who lost sight of them in the first place, I just had one thought:

When you work in the same place you live with children, all sorts of messy mashups occur. Having done this for about 15 years, shortly after the birth of my daughter, I’ve had a number of those mortifying moments where you would will the Earth to open up and swallow you whole—except for the fact that it would leave your child at risk and unattended.

There was that time when I was 10 minutes into an hour-long conference call with a senior executive at a major bank and the dog came in and threw up at my feet. (My gratitude list that day included the “mute” button.) Random strains of recorder or violin practice often made their way onto Skype interviews. There were countless times when the UPS guy knocked at the door, sending the dog into a frenzy during calls or video conferences. There was that time when the Caller ID showed the school nurse’s number while I was in the middle of negotiating a big contract. Or when, like Kelly, I found myself warning, bribing, and cajoling all of the other beings in the house to be quiet for fifteen stinking minutes while Mommy does this radio interview, only to hear a loud crash come from the other room at minute seven.

When those moments happen, your brain is on fire.

Of course, it’s never that dire. Or, at least, it’s never been that dire for me. However, this blended work and life stuff isn’t for the faint of heart, and it’s about time we recognize that people work from anywhere now. If they have children, pets, or other people in their lives, work and life will eventually collide, often in inconvenient, hilarious, embarrassing, utterly human ways. We’re all expected to live an increasingly blended life, so there’s no point in getting upset when a little bit of one thing spills into the other—or into the BBC interview.