Silicon Valley’s New Appreciation for the Business of News 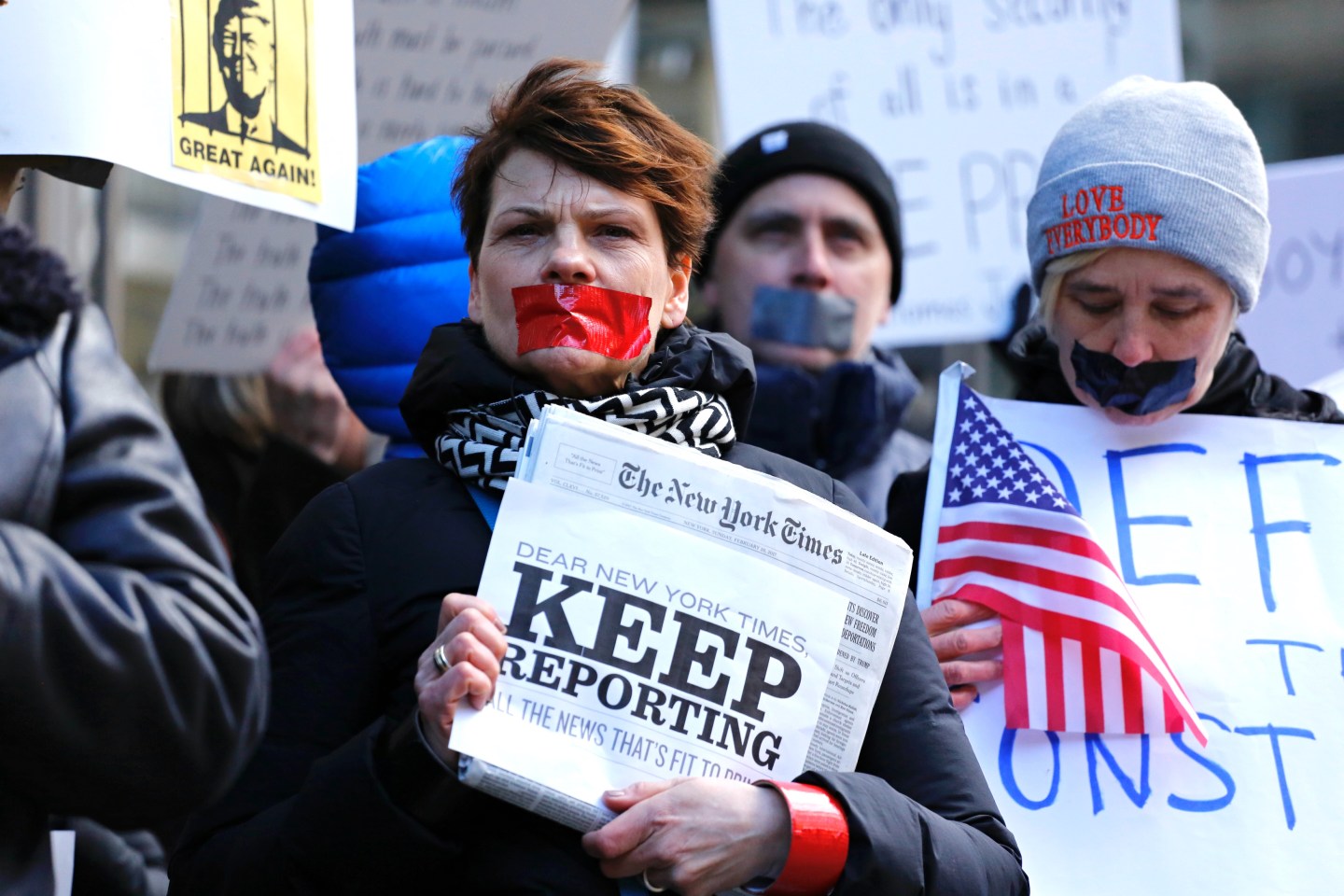 People take part in a protest outside the New York Times on February 26, 2017 in New York. The White House denied access Frebuary 24. 2017 to an off-camera briefing to several major US media outlets, including CNN and The New York Times. Smaller outlets that have provided favorable coverage however were allowed to attend the briefing by spokesman Sean Spicer. The WHCA said it was "protesting strongly" against the decision to selectively deny media access. The New York Times said the decision was "an unmistakable insult to democratic ideals," CNN called it "an unacceptable development," and The Los Angeles Times warned the incident had "ratcheted up the White House's war on the free press" to a new level. / AFP / KENA BETANCUR (Photo credit should read KENA BETANCUR/AFP/Getty Images)
Kena Betancur—AFP/Getty Images

Twice in the last two weeks, I’ve attended convivial dinners in San Francisco jam-packed with young entrepreneurs who’ve asked me the same question: What can they do to help journalism at a time journalism needs so much help. That’s easy, I told them: Pay for it. Get out your credit cards and subscribe to every news outlet you like to read that offers a subscription. In other words, stop reading the news for free just because you can and support something that gives you great value.

While you’re at it, donate money to non-profit journalism organizations whose sole purpose is to conduct the kind of investigations that allow democracy to flourish. Three examples are ProPublica, The Marshall Project, and The Center for Investigative Reporting. Each has a prominent “donate” button in the upper right-hand corner of their home page. A fourth idea is a non-profit that does public-spirited journalism and entertains you: your local National Public Radio station.

It is a fascinating moment. Technology has been eroding the business model for going on 15 years now. Unexpectedly, the news-gathering industry is receiving at least a short-term shot in its ink-stained and digital arms courtesy of a president who has labeled it an “enemy of the people.” (My friend Jean-Louis Gassee, a former Apple executive and a current Renaissance man, had this to say about that.) A confusing time for the history of the republic seems to have awakened consumers to the fact that quality news, information, and analysis take money to produce. Fortune’s Mathew Ingram details the financial benefits of the moment to publications like The New York Times, The Washington Post, Mother Jones, and others here. These publications would fairly be described as critical of the current administration. The Wall Street Journal, whose editor has taken heat from his own staff for insisting on a balanced tone, also has seen a bump.

There’s more good news for those who scribble. French media savant Frederic Filloux, clearly affected by temporarily residing in sunny California, supports a scheme whereby media companies would band together to negotiate with Google (GOOG) and Facebook (FB) to sell subscriptions on their behalf.

Unexpectedly aided by an unlikely president, journalism just might yet be rescued by a longer-standing nemesis: technology.