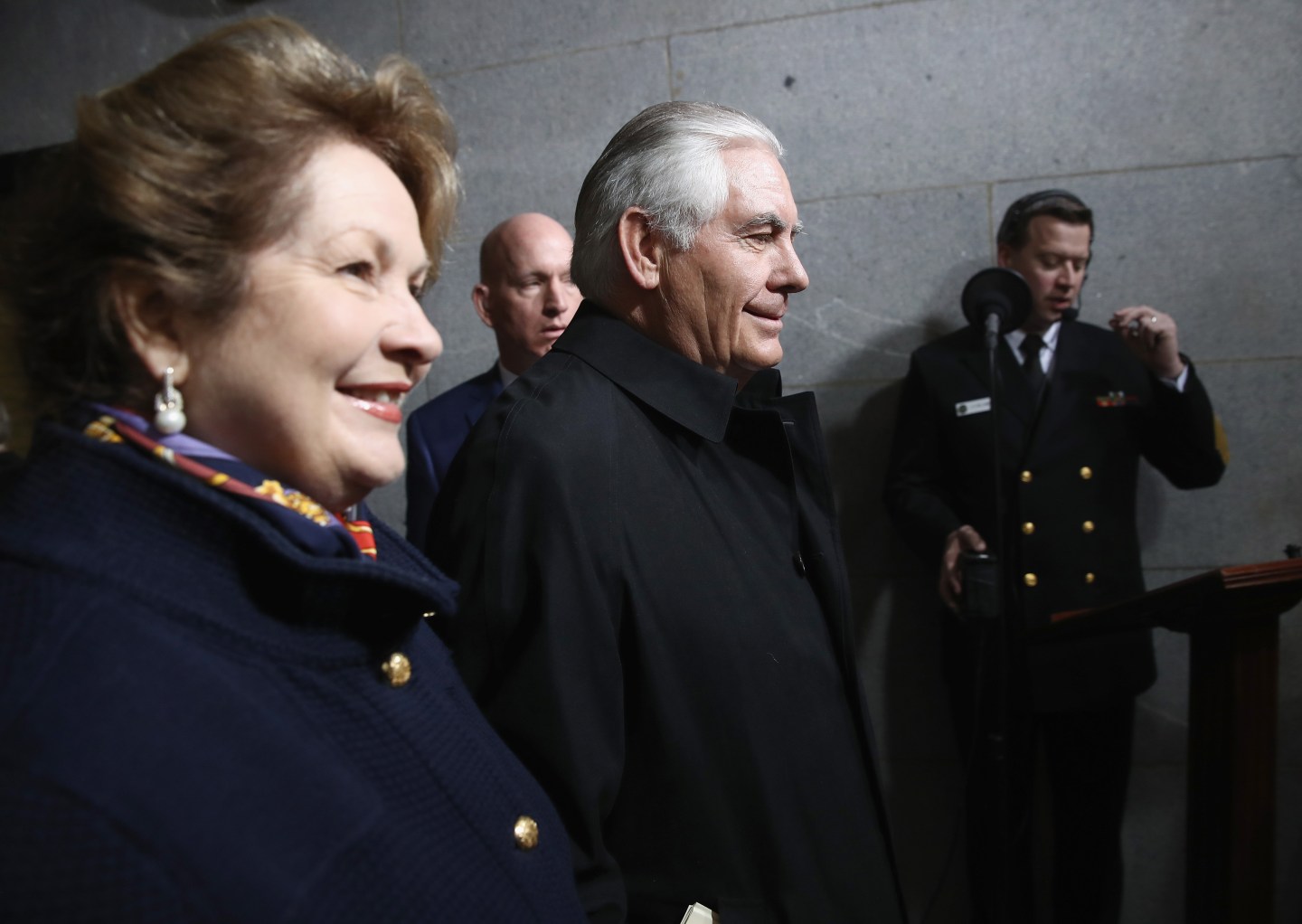 One of Rex Tillerson’s first directives as U.S. secretary of state was an order to senior staff that his briefing materials not exceed two pages.

It was a reflection of Tillerson’s management style honed at the helm of Exxon Mobil (XOM), an oil company known for its relentless focus on efficiency, and one reason his closest aides at the State Department refer to him as “the CEO” rather than “the Secretary.”

“He is asking people to be efficient with their information,” Hammond said, adding that if Tillerson needed more information he would ask for it. “He is a decision-maker and he needs the facts in front of him.”

As a first-time government official with no prior diplomatic experience, Tillerson faces close scrutiny over how successful he will be in managing both the State Department bureaucracy and its relations with Donald Trump and his administration.

Senior State Department officials who have attended meetings with Tillerson say they find him sociable and a man of substance, whose direct manner and probing questions reflect his training as an engineer seeking to solve problems rather than play politics.

The veteran oil executive also made a good impression on his first foreign trip to a Group of 20 summit in Bonn, Germany, last week. Four senior diplomats who met him told Reuters they were relieved to find that he was pragmatic and open to dialogue.

Yet a key concern for U.S. diplomats is how effective his team can be in shaping foreign policy in the new administration. Just two State Department positions of 116 key posts requiring executive branch nomination have been filled, according to the nonpartisan Partnership for Public Service—Tillerson’s and that of U.S. ambassador to the United Nations.

For example, Tillerson still has no deputy after Trump rejected his top choice, Elliott Abrams.

“People want to back him,” one veteran senior official said about the former Exxon Mobil boss. “But people are feeling that this building is being stripped,” said the official, referring to a sense that with so many top positions vacant, the State Department is not fully equipped to help make policy in the new administration.

There is also unease over possible deep staff cuts and the future of some departments. Two people said employees in the Bureau of Management and Resources were told to apply for other positions within the State Department. Hammond, Tillerson’s aide said no decision had been taken to close that division.

In or Out of the Loop?

On one recent matter of longstanding U.S. foreign policy, Tillerson appeared to be sidelined.

On Feb. 14, while Tillerson was at a dinner with Israeli Prime Minister Benjamin Netanyahu in a State Department dining room, news headlines emerged suggesting the United States was backing away from supporting a two-state solution for Israelis and Palestinians.

The two-state solution is the bedrock of the international community’s policy for a settlement between Israel and the Palestinians, but Trump suggested last week he was open to abandoning it if both sides agree.

“No one had been informed of any changes in policy and the Secretary was about to leave on his first major trip,” said one senior State Department official, referring to Tillerson’s visit to Bonn.

Tillerson’s acting deputy Tom Shannon also did not take part in Trump’s meeting with Netanyahu at the White House the following day when his boss was on his way to Europe, according to one U.S. official.

It was unclear whether Tillerson had been left out of the loop deliberately or by accident, said two officials.

A White House official told Reuters he did not know whether Tillerson was briefed in advance. In response to broader concerns about communication between the State Department and the new administration, he said both coordinated “very well.”

“There are open lines of communications in both directions,” the official, who declined to be named, said. “The White House and the State Department coordinate closely across a full range of issues that concern both organizations.”

To be sure, on another important issue, Tillerson had his say in persuading Trump to back Washington’s stance on “One China” policy, which acknowledges Beijing’s position that Taiwan is part of it. Trump has in the past appeared to question whether the United States would continue to respect that.

Hammond said Tillerson was on the phone with Trump several times a day. “This is the general style of the president to have quick check-ins with people, get people’s advice on things,” he said. “Information for CEOs flows up, and as a former CEO (Tillerson) understands that.”

Tillerson has said little publicly since he started and his aides are quick to draw a contrast between him and predecessor John Kerry, a former senator and presidential candidate who reveled in extensive foreign travel and deal making.

“Tillerson is not John Kerry, it is unfair to compare the two,” said Hammond. “He will quietly go about his job as a counselor and advisor to the president.”

For Tillerson’s State Department the concern is how to maintain a similar degree of communication with an administration grappling with a succession of crises, nine officials involved in foreign policy and security issues, said.

Over the past month the White House has faced legal setbacks over its immigration orders, the resignation of Trump’s national security adviser and an investigation into possible links between his campaign and Russian intelligence.

Monday’s resignation of Michael Flynn, who served as Trump’s national security adviser for just 24 days, in particular created a vacuum at the National Security Council, which acts as a key partner for the State Department in formulating Washington’s foreign policy.