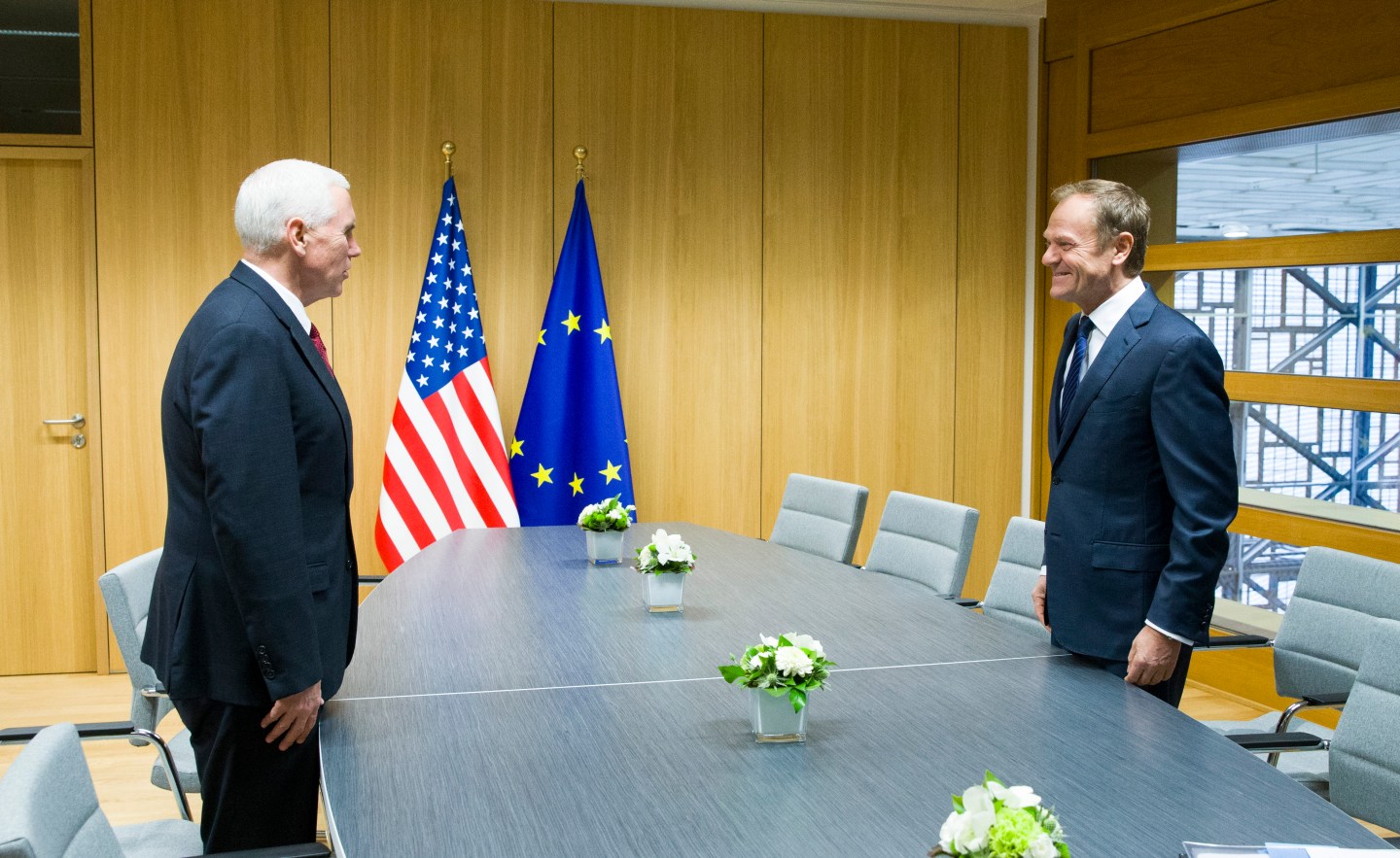 European leaders finally exhaled Monday after Vice President Mike Pence told them that the U.S. still shares its values and doesn’t want to break it up.

Speaking with a visibly relieved EU Council President Donald Tusk of Poland after a meeting at the EU’s headquarters in Brussels on Monday, Pence delivered the kind of friendly, reassuring message that Europe has come to take for granted from the U.S., and which it has pointedly not gotten from President Donald Trump.

“Whatever our differences, our two continents share the same heritage and the same values, and above all the same purpose: to promote peace and prosperity through freedom, democracy and the rule of law, and to those objectives we will remain committed,” Pence said, reading from a prepared statement.

Pence’s comments came only a few days after a top-level meeting of security experts in Munich, where the new administration’s statements had led participants to speculate openly about “the death of the West.”

The EU has been alarmed by comments from the new U.S. president, who during the campaign last year threatened to tie U.S. support for an “obsolete” NATO to big increases in defense spending by its European members to meet agreed minimum levels. The level of concern was ratcheted up even higher after Trump appeared to encourage other EU members to follow the decision of the U.K. and leave the bloc that he dismissed as a “vehicle for Germany.”

Pence, by contrast, spoke on Monday of a “steadfast and enduring” partnership with Europe, playing down fears of a trade war, despite the fact that both sides have effectively turned their back on the Obama-era Transatlantic Trade and Investment Partnership initiative.

“Transatlantic commerce supports 14 million jobs on both continents and improves the lives and well-being of all of our citizens,” Pence said, noting that the U.S. and Europe still account for nearly half the world’s economic output.

He also promised to “hold Russia accountable” when it comes to defending the integrity of the region’s smaller states, and insisted that Russia stick to the “Minsk Agreements,” that were supposed to end the fighting in eastern Ukraine. The faltering peace deal was hammered out by Germany, France, Ukraine and Russia without direct U.S. participation, and Trump’s public statements about a rapprochement with Russia have invited speculation that the new administration would wash its hands of them completely.

Sure enough, Pence warned that the U.S. could still try to break the deadlock in its own way.

“At President Trump’s direction, we will also search in new ways for new common ground with Russia. which President Trump believes can be found,” Pence said.

And there were also thinly-veiled barbs at Europe’s failings in dealing with Islamic terrorism. He dwelt at length on the terrorist attacks in Brussels itself a year ago, and called for “greater coordination and intelligence-sharing among EU member states, and between the EU and (NATO).”

“The safety and security of your union and our people depends on that increased collaboration,” Pence said.

Nearly all the European members of NATO spend less on defense than the 2% of GDP that they agreed on as a bare minimum at a summit in 2014. Defense Secretary James Mattis again called for Europe to carry “the proportionate share and the necessary cost” of regional security at the Munich Security Conference last week. German Chancellor Angela Merkel, singled out by Trump for an immigration policy that he says undermines European security, had countered that Germany would do its best to meet that commitment by 2024 (it currently spends only 1.2% of GDP on defense).

But other European leaders have been more sniffy. Jean-Claude Juncker, the EU’s top bureaucrat, said on the sidelines of the Munich conference: “I don’t like our American friends narrowing down this concept of security to the military. ”

“If you look at what Europe is doing in defense, plus development aid, plus humanitarian aid, the comparison with the United States looks rather different,” Juncker argued.