How the Trump-Russia Election Controversy Only Makes Putin Stronger 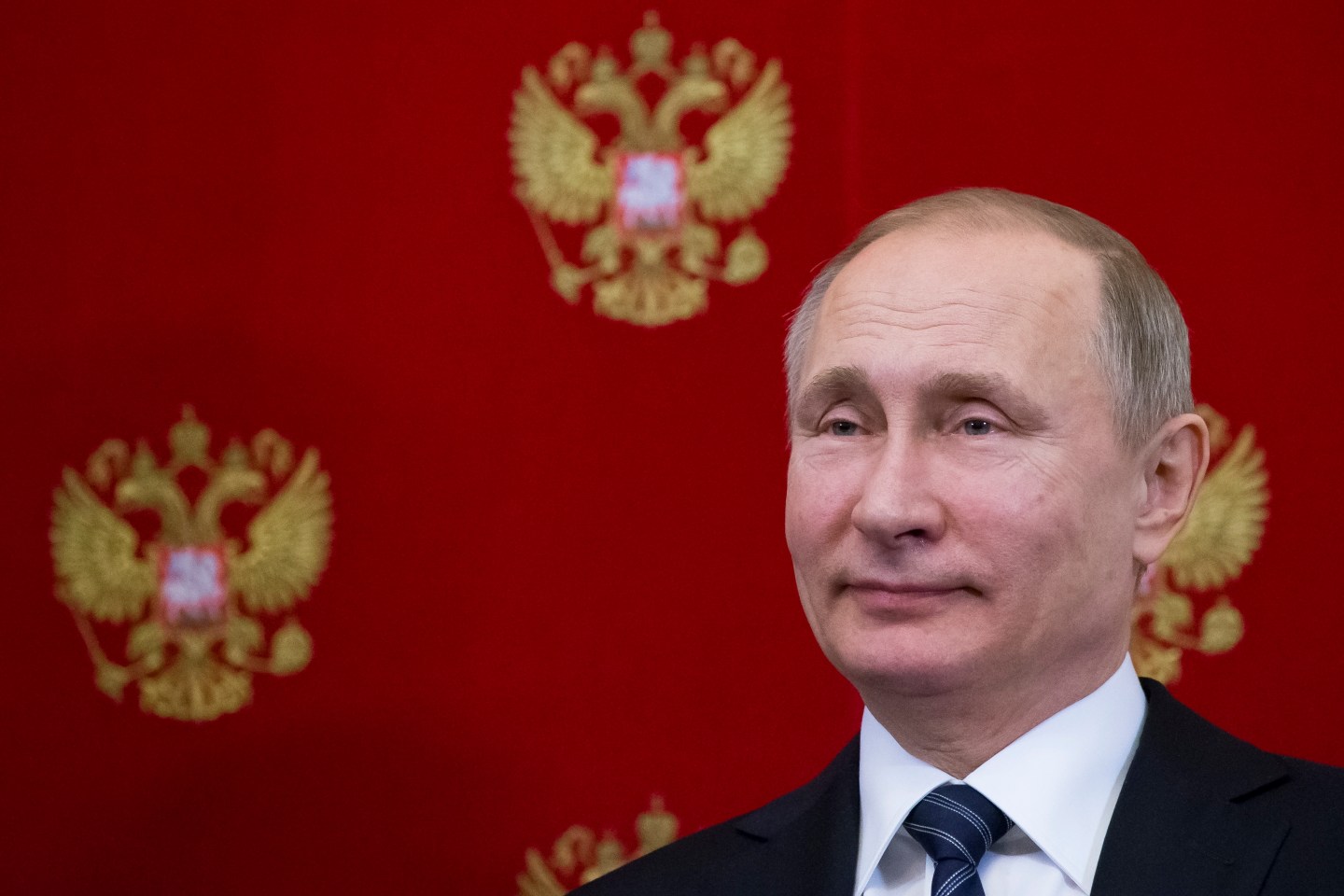 Russian President Vladimir Putin listens for a journalist's question during a news conference with Slovenian President Borut Pahor after their talks at the Kremlin in Moscow, Russia, Friday, Feb. 10, 2017. Putin thanked Slovenia Friday for offering to host his first meeting with U.S. President Donald Trump, but added that the prospect hinges on Washington. (AP Photo/Alexander Zemlianichenko, pool)
Alexander Zemlianichenko—AP

With one national security advisor out and another would-be replacement turning down the job, the White House administration doesn’t quite seem to match President Donald Trump’s description of it as a “fine-tuned machine.” And no matter how much he and his staff struggle to dismiss “the Russia story” behind such havoc as nothing more than a “scam,” the question of the Kremlin meddling in U.S. politics continues to generate doubt and speculation.

Interpretations are divided. Some portray Trump as a puppet of Russian President Vladimir Putin. Online memes effeminize the U.S. leader, casting him as an orange-haired goddess, clinging to a bare-chested Putin as they ride a horse together across the Siberian plain. Others envision the two men as coeval bromance brothers, if not plotting to undermine global liberal democracy, then certainly scheming for money and power.

Certainly there is a story here, but it is one where—perhaps in line with the tenor of the 2016 presidential campaign itself—boundaries between expert analysis and imaginative allegation have blurred. Perhaps that new normal of confusion is the real story, and the greatest threat. For based on the few facts of the case that have been fully revealed, most current headlines are wildly exaggerated—and in their exaggeration, only play into Putin’s hands. He is the only person emerging from the wreckage of the first, troubled weeks of the Trump administration with an enhanced reputation, and that as the strongest man in the world. Love him or hate him, he looks like a winner.

So how should we rethink the scandal?

First of all, consider Michael Flynn’s resignation as national security advisor and the promises he may or may not have made to a Russian ambassador about revoking sanctions. Yes, the Logan Act forbids interfering in diplomatic efforts while still a private citizen, and Flynn had not yet taken office. But it was hardly a secret that Trump, if elected, wished to pursue a more interest-driven policy with Russia. As a candidate, Trump advertised his determination to introduce a new era of deal-making and transaction-based diplomacy—espousing a vision of U.S. power grounded in an unapologetic pursuit of American economic and strategic aims, rather than what he has repeatedly dismissed as long-winded liberal debates over rights, principles, laws, or process.

In this context, it shouldn’t take a rocket scientist to figure out that the first item on the Trump agenda regarding Russia would likely have to do with jointly fighting the Islamic State in return for lifting sanctions. So unless Flynn was actually signing contracts or accepting payments, his sins seem only to have been those of, at worst, excess enthusiasm. Whatever message he conveyed was likely understood on both sides with little more than a wink over after-work drinks.

Secondly, questions abound over the regular contacts former Trump campaign head Paul Manafort and a host of still-unnamed Trump political and business associates are reported to have had with Russian intelligence operatives in the months leading up to the election. How illegal were these contacts? Did the Americans involved understand with whom they were interacting? (“It’s not like these people wear badges that say, ‘I’m a Russian intelligence officer,’” Manafort proclaimed.)

This is not to say that an investigation is unjustified. At the very least, what both this week’s new media stories and the declassified U.S. intelligence report released last month do suggest is that any number of people in the Trump campaign were happy to have help in undermining Hillary Clinton, and welcomed any kind of nefarious effort to collect dirt against her. Nor did they bother themselves much about who was behind whatever information they received and how, exactly, it might have been obtained. Whether compromising documents mysteriously appeared online via groups of Kremlin-funded computer hackers or simply thanks to a 400-pound shut-in eating cupcakes in bed, the campaign ecumenically welcomed them all. Moreover, when asked to respond to legitimate inquiries about Russian actions, the administration has failed to acknowledge even the most obvious of problems, choosing instead to blame “fake news,” “very fake news,” and “stupid people” people for raising such questions to begin with.

Nevertheless, the fact is that Putin did not swing the U.S. presidential election. Did he disrupt the process, create scandals, and generate confusion? Yes. But neither he, nor Trump for that matter, seemed to expect anything but a Clinton victory last November. According to the January intelligence report, pro-Kremlin bloggers had plans to launch a #DemocracyRIP Twitter campaign, aimed at sowing disillusionment about the outcome of the election, just as soon as Trump conceded defeat.

While Trump’s contempt for processes of accountability and disclosure seems to mandate the investigation, one troubling consequence is that, however this scandal plays out, Putin stands to gain. Although the pace of rapprochement may now be slowed, if Trump stays in power, Putin can anticipate an eventual reconfiguration of relations between the two countries, one driven by pragmatism rather than ideology, and thus far, far more wide-ranging than the “reset” first floated by President Obama in 2009.

This time, any such reorientation will involve something more than the symbolic exchange of a little red button between rival officials (or what Trump on Thursday colorfully referred to as a “stupid plastic button that made us all look like a bunch of jerks”). Instead it will be driven by a desire to make money. After two years of declining GDP, the Russian economy is showing signs of recovery: The IMF projects 1% growth in 2017, while Kremlin-funded Sputnik reports the highest level of business confidence since 2011. In such a climate, foreign investments, not to mention oil and gas partnerships, could flourish—particularly if everyone agrees never to talk politics.

Meanwhile, if the Trump administration fails, Putin becomes legend both at home and abroad. Recent complaints by French presidential frontrunner Emmanuel Macron that Russia is unfairly meddling in his country’s election merely reinforce Putin’s place in the popular imagination as the man who can bring even America to its knees.

But this reputation of staggering evil genius is undeserved. It’s true that the Kremlin is developing a sophisticated global media strategy centered around the covert stealing and tactical leaking of private information, combined with the overt mass production of sleekly packaged news stories that are often deliberately skewed and occasionally false. But Russia is not alone in so doing, and was not even particularly good at it before 2014.

The problem is the alacrity with which Trump, or his handlers, have been willing to take advantage of the weaknesses in our system that Russian operations have exposed, and to exploit whatever opportunities for manipulation that they have been given. The reality is that Trump, not Putin, is driving the U.S. presidency down.

Cynthia Hooper is an associate professor of history and director of Russian and Eastern European Studies at the College of the Holy Cross.