Everything to Know About Snap’s IPO 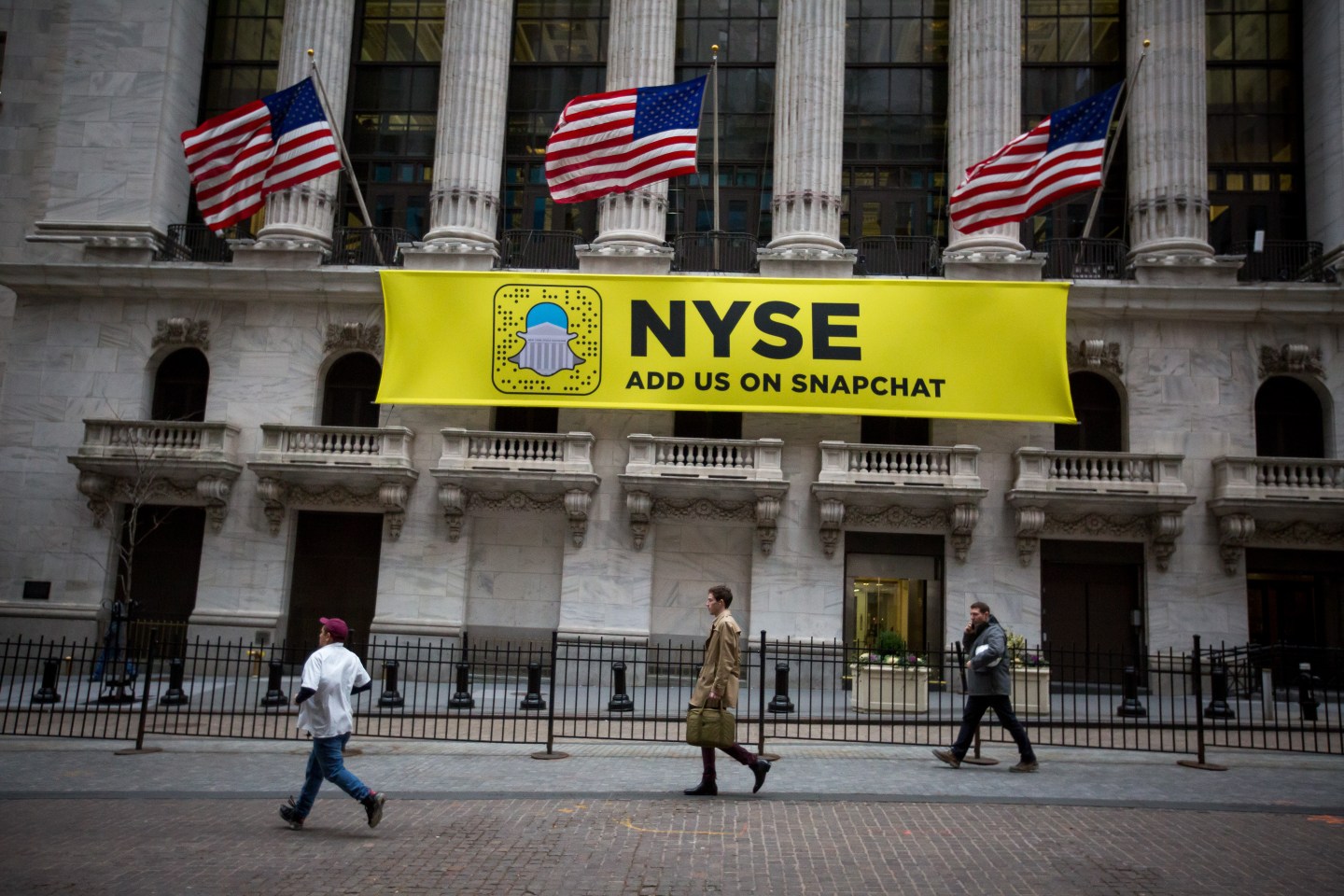 Snapchat’s parent company will soon raise approximately $3 billion under the ticker “SNAP” on NYSE. Here’s a rundown of key information on the company, with a side serving of party goats and sexting.

Income: Snap is losing a ton of money, but revenue grew significantly last year. Snap brought in $404 million in 2016 and posted a net loss of $514 million. Compare that with 2015: $58 million in revenue and a net loss of $372 million. As Bloomberg’s Shira Ovide notes, Snap’s cost of revenue is higher than its actual revenue. At a reported $25 billion valuation, that’s a 62x price-to-sales ratio. (For comparison, Facebook’s ratio is 13x.)

Users: Snap has 158 million daily active users as of the fourth quarter of last year, and they’re hooked: They use the app an average of 18 times a day. It’s a story of compulsive usage.

But similar to Twitter in its IPO, Snap’s rate of growth is slowing. Users grew a respective 60% and 66% in the first two quarters of the year, but only 55% and 46% in the last two quarters.

Snap attributes the drop-off in user growth to “performance issues” from one of its product updates to Android phones and “increased competition” from companies that “launched products with similar functionality to ours.” Fixing the Android issue helped in December, the company says, but so did seasonal usage that won’t continue in future months.

In other words, Instagram Stories, which launched in August, is hurting Snapchat. After Mark Zuckerberg’s many failed attempts to copy Snapchat, he’s finally done it with Instagram Stories. If at first you don’t succeed, copy, copy again.

Rights: As expected, Snap isn’t giving shareholders a vote. The filing states that even if CEO Evan Spiegel or co-founder and CTO Robert Murphy get fired, they may be able to retain control of the company. They even retain control for nine months after they die. Their total control is even listed as a risk factor. So is the fact that no other company has gone public with non-voting stock on a U.S. exchange. (Note: Facebook and Google’s dual-class stock structures allowed shareholders to vote, even if the votes were mostly meaningless against their founder’ preferred super-shares. Facebook has since created a third, non-voting class of shares.)

Investment managers at some of the top U.S. pension funds are not happy about Snap’s no-vote shares. The Council of Institutional Investors sent a letter to Snap urging the company to reconsider its share structure.

The kneejerk defense would be, “Don’t like it? Don’t buy.” But because companies of Snap’s size will be included in major stock indexes, many investors won’t be able to avoid it.

To be clear: The investors complaining would be passive shareholders anyway. But they believe this structure, which goes beyond what Google and Facebook did in their IPOs, sets a bad precedent. (“For every Google or Facebook, there is a Zynga or GoPro,” Anne Sheehan, director of corporate governance at Calstrs, told the Financial Times.)

It also begs the question of whether investors will ever be able to pick and choose which parts of index funds they want to own. (The S&P 500, minus Snap, for example.) It’s not the first time this idea has come up: After the Wells Fargo scandal, Howard Lindzon argued that fund managers like Vanguard should launch an “S&P 496” that excludes the scandal-prone banks.

M&A: There’s a conspiracy theory floating around, based on Snapchat’s slowing user growth, that the IPO is a ploy to attract a last-minute acquisition bid. After the AppDynamics switcheroo, where Qatalyst shopped the company without even being formally engaged, it’s top of mind.

But most people I’ve spoken to are skeptical for a few reasons: One, CEO Evan Spiegel is not interested in selling. Just look at the aforementioned meticulous, unprecedented governance structure he and his co-founder created to maintain control of the company. Two, the $25 billion price tag prevents most last-minute buyers from swooping in. Three, see point No. 1 and underline it. But just for posterity, of the companies with the cash to do such a deal, Apple has recently hinted it might do a big media acquisition.

Joanna Coles, Snap’s sole female board member, makes far less money for her board seat than the other five male directors who are being paid, Fortune’s Valentina Zarya reports.

Talent: Snap has one of the strictest vesting schedules for employee stock in the tech industry. That’s likely to slow the brain drain that typically happens at tech companies after they go public. Especially when you consider that, of the company’s 1,859 employees as of 2016, the majority of them (67%) joined the company in the last year.

Carrot: Spiegel gets an additional 3% of the company just for taking it public. As Peter Kafka of Recode notes, that’s a $750 million IPO bonus. The board granted that stock to him in 2015 “to motivate him to continue growing our business and improving our financial results.”

Narrative: The S-1 takes a conversational (dare I say millennial?) tone at times, explaining that, OMG, Snap did not know how it would money at first, but because “our server bills were getting expensive, ” the company “realized we needed to start monetizing—and fast.” Later, the company describes its team as “kind,” as in, “the type of kindness that compels you to let someone know that they have something stuck in their teeth even though it’s a little awkward.” When describing the personal connection people feel with their smartphones, it says, “We eat, sleep, and poop with our smartphones every day.”

Risks: Snap’s robust section of risk factors is twice as long as Facebook’s was when it went public.

Not a sexting app: “When we were just getting started, many people didn’t understand what Snapchat was and said it was just for sexting, even when we knew it was being used for so much more.”

Hard to use: Snapchat has a reputation for being confusing. Lots of people have tried the app and abandoned it, and it is really, really hard to get people to give an app a second chance. (Just ask Twitter!) But Snap doesn’t view that as a problem: “Just because products are sometimes confusing when they’re new doesn’t mean we are going to stop building innovative products for our community. Part of the joy of using Snapchat is discovering new features and learning how to use all of the products that we create.” (If any of you are still confused by the app, see the helpful diagram maps.)

Other fun facts: Snap paid nearly $1 million to protect Spiegel last year and bought $650,000 worth of legal work from his dad’s law firm. Snap’s office arrangement could lead to people feeling isolated and quitting. This may be the first ever S-1 to use the words selfie, sexting, party goat and barf . The company will spend $400 million a year on Google Cloud services over the next five years, meaning Google might make more money from Snapchat than Snapchat does. Snap paid $157.5 million to settle a lawsuit with its third co-founder.

Is it a buy? Investors I spoke with said yes. Not because they can tie the company’s performance to any sensible financial model, but because they have Facebook FOMO. “I’m willing to risk losing 50% if there’s a chance this is like Facebook and I can get 10x.” But they may have to stick around for the long haul: At its current expense base, investors estimate Snap would have to grow by around 12x to get to Facebook-style profit margins of around 40%.