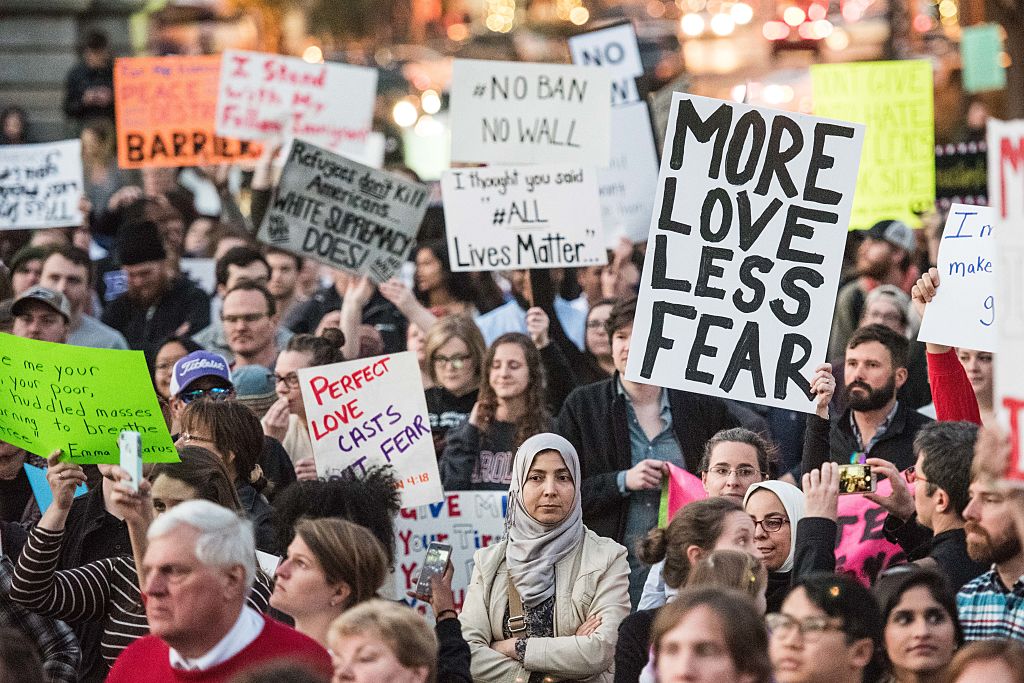 Protestors at the South Carolina Statehouse during a demonstration in response to the executive order blocking entry of refugees and travelers from seven predominantly Muslim countries, Jan. 31, 2017 in Columbia, S.C.
Sean Rayford—Getty Images

Imposing a temporary travel ban on citizens from seven Muslim countries, President Donald Trump said the move would help protect the United States from terrorism. But less than one-third of Americans believe the move makes them “more safe,” according to a Reuters/Ipsos opinion poll released on Tuesday.

The Jan. 30-31 poll found roughly one in two Americans backed the ban, which also suspends admission of all refugees for 120 days, although there were sharp divisions along party lines.

Trump has pushed back against critics who say the travel ban targets Muslims. He says the “extreme vetting” is necessary to protect the country and its borders.

“This is not about religion,” Trump said in a statement after announcing the travel ban on Friday. “This is about terror and keeping our country safe.”

In the Reuters/Ipsos poll some 31% of people said the ban made them feel “more safe,” while 26% said it made them feel “less safe.” Another 33% said it would not make any difference and the rest said they don’t know.

Some Republican lawmakers criticized Trump’s order and said it could backfire by giving terrorist organizations a new recruitment message.

“This executive order sends a signal, intended or not, that America does not want Muslims coming into our country,” senators John McCain of Arizona and Lindsey Graham of South Carolina said in a joint statement.

Cheryl Hoffman, 46, of Sumerduck, Virginia said she was thrilled that Trump ordered the ban.

“I understand that the country was founded on immigrants,” said Hoffman, who participated in thepoll. “Please, I get that. But I’m worried that refugees are coming in and being supported by my tax dollars.”

Another poll respondent, Veronica Buetel, 57, of Green, Ohio felt just the opposite: “Yes, we do live in scary times, but there are other, better ways to root out terrorism.”

Westy Egmont, director of the Immigrant Integration Lab at Boston College, said Americans have grown increasingly hostile toward refugees and immigrants as the influx has shifted from Eastern Europeans to people from countries like Iraq, Somalia and Afghanistan.

“The rise of those numbers, as relatively small as they are, have gathered just enough attention to set off a small reaction from people who are genuinely uncomfortable with the diversity around them,” Egmont said.

For more on the immigration executive order, watch: