This App Lets You Redesign Your Apartment Using Snapchat-Like Filters 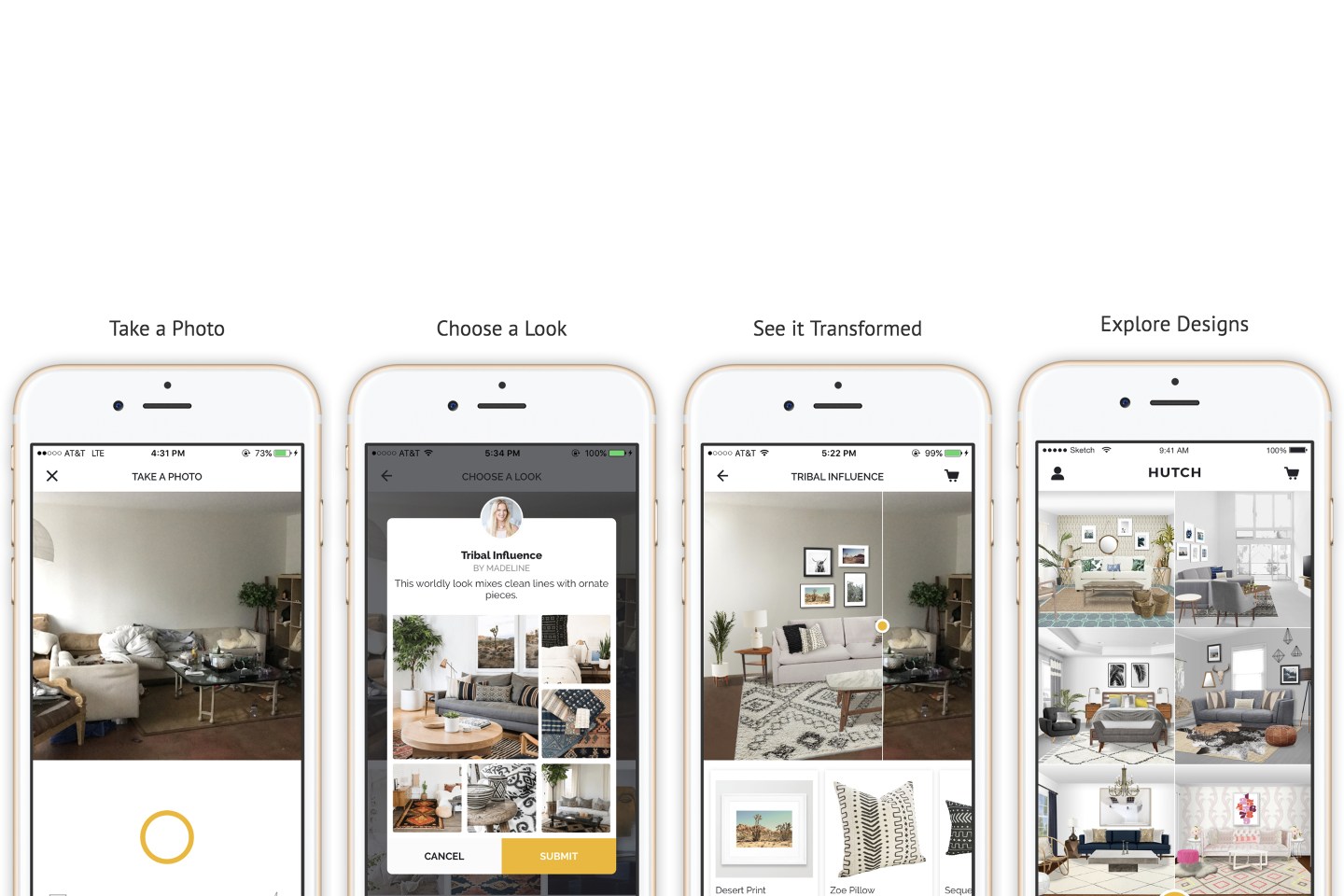 For anyone who’s ever wanted to redecorate their space without doing the heavy lifting, a new app wants to help.

Hutch, which launched Wednesday, lets users upload a photo of their space and apply a style filter such as “French couture” or “eclectic chic.” Using proprietary technology, an interior designer then transforms the space with a virtual design and sends the look back to the user within 24 hours. From there, users can buy the pieces they like.

The app is free, but the company makes money when it sells furniture, which it buys wholesale and sells at a premium.

Hutch itself has undergone quite a few makeovers: its founders have tried three times in the past two years to create a successful interior design service.

In 2015, Beatrice Fischel-Bock and her co-founders appeared on Shark Tank to pitch Zoom Interiors, a web-based service allowing users to set up a consultation with a designer and receive a floor plan with custom designs. The Sharks criticized the model, saying it wasn’t scalable. The team managed to secure a $100,000 deal for 33% of the business with Barbara Corcoran, but it later fell through.

That’s when Tinder co-founder Sean Rad swooped in. Rad began connecting the Zoom founders with investors and attending weekly meetings. In a few months, the company renamed itself Homee, changed its model, and raised seed funding from Rad, Ben Silverman and Scooter Braun. In July 2016, Homee announced a $5 million Series A round, led by Peter Thiel’s Founders Fund, bringing the total funding to $7.2 million.

Fischel-Bock thought she had a winner on her hands. Homee was a messaging app that allowed users to chat with interior designers, create a look for their home, and buy furniture recommended by the Homee team. The chat-based app was gaining good traction until she realized something game-changing — when it comes to interior design, people don’t really want to chat.

“We were growing more than 100% month over month, and we just found that it wasn’t a sustainable, scalable process on our end,” Fischel-Bock says. “We wanted to keep it a free experience.”

The team realized that it would have to start charging for the chat feature in order to sustain its growth. The chat element was the most expensive part of process, but user feedback indicated that people prefer to see the design, not talk about it. So the founding team decided to pivot yet again, taking the most popular Homee feature — the visual rendering of the space — and making it the focus of the business.

With Hutch, there is no chatting. The app simply allows users to upload photos and get furniture suggestions within 24 hours.

The company hopes to build out the technology necessary to automate the process in the next few months, so the user can see a render of the space almost instantaneously. The hope is that the app will generate “a pseudo-version of reality,” like Snapchat filters that can recognize a user’s face, and apply effects.

Interior design startups Laurel & Wolf, Havenly and Homepolish are all competing for users, but the real key for Hutch lies in its technology. If the company can develop its “proprietary photo” software to automate designs and generate renders in seconds, it’ll be a game-changer for the interior design industry.

“Interior design is a space where you either have to spend a lot of money to go through a very long process or be overwhelmed at the number of options,” Rad says. “The most successful companies are those that help people filter through all the noise.”