Technology Could Destroy More Jobs for Women Than Men 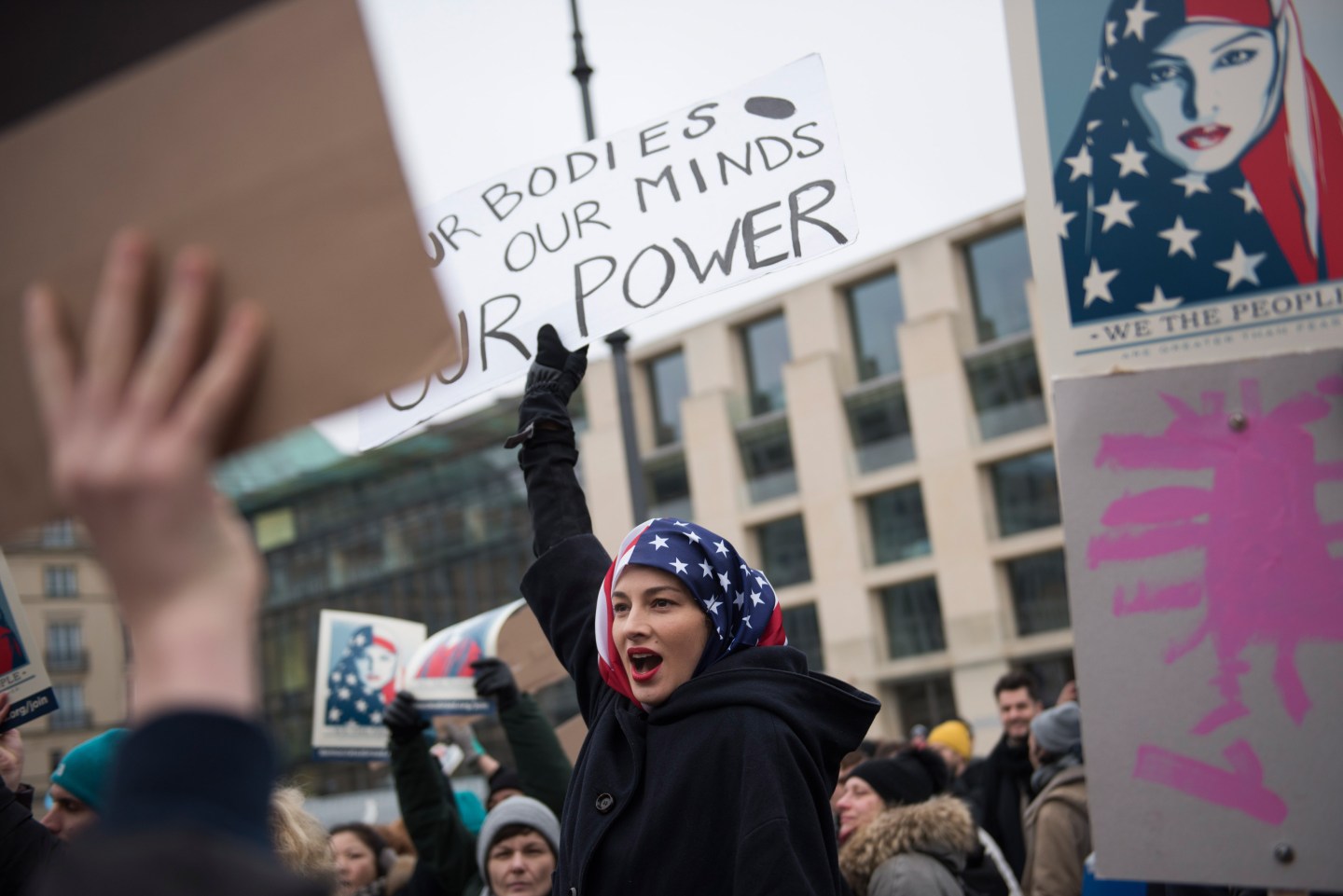 BERLIN, GERMANY - JANUARY 21: A Woman wearing a USA flag as a headscarf attends a protest for women's rights and freedom in solidarity with the Women's March on Washington in front of Brandenburger Tor on January 21, 2017 in Berlin, Germany. The Women's March originated in Washington DC but soon spread to be a global march calling on all concerned citizens to stand up for equality, diversity and inclusion and for Women's rights to be recognised around the world as human rights. Global marches are now being held, on the same day, across seven continents. (Photo by Steffi Loos/Getty Images)
Steffi Loos/Getty Images

The global demonstrations last week for women’s rights that followed the U.S. presidential inauguration shone a spotlight on the many challenges that stand between women and true equality. For years, data indicated that while progress toward workplace equality was slow, it was moving in the right direction.

This past year, that progress not only halted, but we actually lost ground. This is the headline story from new data from Mercer’s “When Women Thrive, Businesses Thrive” study released at the World Economic Forum in Davos. This echoes findings from the World Economic Forum’s Global Gender Gap Report 2016, which concluded that at the current rate of change, the economic gender gap will not close for another 170 years – 52 years longer than projected in the Forum’s 2015 report.

While conversation around workplace equality tends to focus on politics and policy, a major cause of this growing gap is technology. Women disproportionately hold jobs under the greatest threat of automation and displacement. Conversely, three of the five highest-growth fields – management, computer science and mathematics, and architecture and engineering – are plagued by low female representation and dim prospects for improvement.

While it is important to address these trends from the perspective of fairness and equality for women, we must also consider the damage that a growing equality gap would inflict on the global economy. Studies show that global GDP would jump by over $10 trillion if every country were to match the progress toward gender parity of its fastest-improving neighbor. Until we unleash the economic engine that gender parity ignites, we’re holding the world back.

Despite today’s gloomy picture, there is reason for hope. While the overall picture still indicates significant work ahead, many individual companies are tackling gender equality head-on and making impressive strides. For example, while I was in Davos, I sat on a panel discussion with Ann Finucane, vice chairperson of Bank of America, who reported that women now make up more than 50% of their workforce, including 38% of the executive team. She explained their employees mirror their customer base. And, she explained that she advocates more than mentorship but sponsorship. This being a champion throughout a younger woman’s career journey, not just at a particular moment in time.

On the same panel, Alan Jope, president of personal care products at Unilever, spoke about a new agnostic skills test they have developed that aims to determine the most qualified job candidates irrespective of gender or subjective interview biases. This solution hits at the heart of unconscious bias, one of the most detrimental and difficult problems to solve.

These examples demonstrate that major gains are possible, yet too many companies are still without a serious plan for addressing the issue. Business leaders must take the next step and convert their stated support for gender diversity into a concrete, measurable game plan. And there must be a process in place to level the playing field. Our study suggests a number of principles any organization can take, including:

Proof. As the saying goes, what gets measured gets managed. Only by knowing its numbers can a business manage for success – and this is true when it comes to achieving not only its financial performance goals, but also its talent and diversity goals.

Passion. Our research indicates a serious passion gap. Right now, just 57% of organizations report that their senior executives are engaged in diversity and inclusion activities, and just 39% of male employees are engaged. Advancing diversity in an age of profound upheaval in the workforce will depend not only on leaders who believe in the value of diversity, but on those that are passionate and willing to personally commit themselves to the cause.

Process. Passion is essential, but rethinking those specific processes and practices that are holding women back or that could be doing more to help women thrive is where the “rubber meets the road.” Clear and measurable processes are essential to both mitigate the risks and maximize the opportunities driven by technological disruption and the future of jobs.

Perseverance. The fact that gender diversity is actually on the decline after years of steady progress shows that gains are hard-won but easily lost. The organizations that will reap the benefits of a thriving female workforce are those that make sustained, year-over-year commitments. Organizations must bae willing to push for fundamental behavior change and a long-term outlook on creating a diverse talent pipeline.

With businesses already struggling to find the talent they need, management teams must step up and answer this call. And across all levels of business, we must ask ourselves, how can we help women thrive?

The future of the global economy may depend on how we answer that question.

Julio Portalatin is the President & CEO of Mercer.