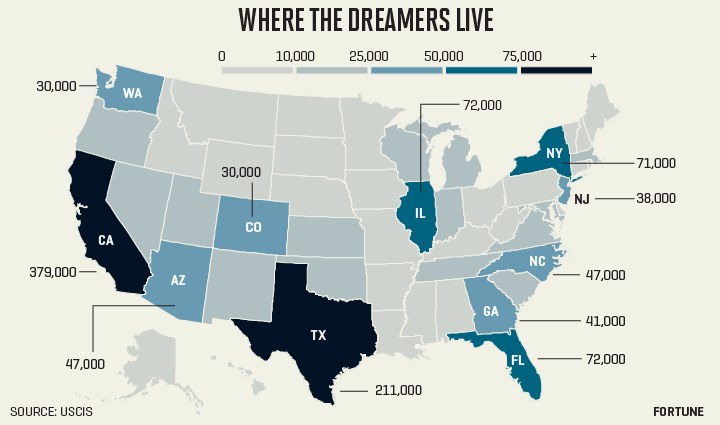 Trump campaigned on ending DACA, and though he seemed to soften his stance slightly post-election—“We’re going to work something out that’s going to make people happy and proud,” he told TIME in December—his spree of Obama-undoing executive orders in recent days has provided little comfort for those whose legal status rides on the program.

Trump, himself, articulated some sympathy for their position (and perhaps an odd disregard of his own power) in that same interview, telling TIME: “They got brought here at a very young age, they’ve worked here, they’ve gone to school here. Some were good students. Some have wonderful jobs. And they’re in never-never land because they don’t know what’s going to happen.”

On Monday, White House Press Secretary Sean Spicer did not make Trump’s intentions much clearer. When asked about the fate of the program, Spicer said the president’s first immigration priority is to deal with those who are in the country illegally and have a criminal record (i.e not the Dreamers, who have all undergone rigorous background checks). But, he added, “Then we’re going to continue to work through the entire number of folks that are here illegally.”

There’s a bipartisan effort in both houses to address the uncertainty with legislation—the Ban Removal of Individuals who Dream and Grow Our Economy, or BRIDGE, Act—that would protect DACA beneficiaries until more comprehensive immigration reform is achieved.

As the BRIDGE bill’s name suggests, there’s a strong business case for keeping Dreamers in the U.S, according to recent studies. The non-partisan Migration Policy Institute has found that work authorization provided by deferred action boosts a workers’ household income, on average, by 10%.

But such measures also boost the fortunes of those around them. Immigrants’ gains in wages and productivity greatly benefit the broader economy, according to work from the left-leaning Center for American Progress. Its research, led by a professor at the University of California-San Diego, estimates ending DACA would cost the country $433 billion in growth over 10 years, including an annual $11 billion hit to California alone. Other states with large Dreamer populations—including Texas, Illinois, New York, New Jersey, Florida, Arizona, North Carolina and Washington—stand to lose more than $1 billion in GDP per year.

The Immigration Legal Resource Center, meanwhile, estimated in December that ending DACA—and theoretically removing hundreds of thousands of Dreamers from jobs—would cost American employers at least $3.4 billion in terms of turnover and hiring expenses and reduce social security and Medicare tax contributions by $24.6 billion (half of which would have been paid by employers).

For now, those losses are merely hypotheticals. As of Tuesday, US Citizenship and Immigration Services continued to accept and process DACA requests.

A version of this article appears in the February 1, 2017 issue of Fortune with the headline “Are ‘Dreamers’ Worth Billions to States?”.