Portraits of Dissent: Inside the Women’s March on Washington 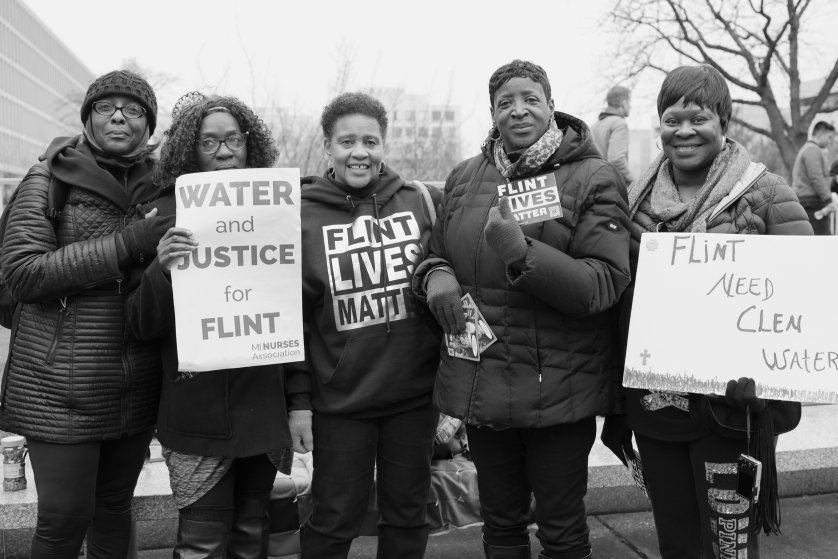 After months of agitating in the social media thunderdome about the election, the crowd at Saturday’s massive Women’s March on Washington was joyful, ebullient even. There seemed to be universal relief at getting beyond the virtual streets and onto the real ones, to sing, to chant and to commiserate. The sheer size of the crowds gathered around the globe, hundreds of thousands in Washington alone, fueled hope and a kind of giddiness among weary progressives and others fearful of what a Trump administration might mean for their families.

But underneath the singing, the chants, the witty signs and all those pink “pussy hats,” the reasons marchers came to the Capitol were deadly serious. It was more than women’s rights issues like contraction or abortion, or even the fury over campaign rhetoric many women saw as rife with the kind of misogyny and shockingly callous attitudes toward sexual assault.

There were women who rode busses for 10 hours from Flint, Mich., to remind everyone that they still don’t have safe water in that city. There were families that went through the extraordinary effort of bringing a special needs child in a wheelchair to a massive all-day protest that exhausted even the fittest marchers, because they were afraid of losing their health insurance. There were LGBTQ kids who entered college or high school at a time when the White House was lit up in rainbow colors only to worry that instead of moving forward, they may have to fight just to maintain the status quo. And there were Muslim-Americans who were in tears describing how they now feel like “other” in the country of their birth. Moms born in Mexico City were there to show their American-born kids how to speak up for immigrants and for women’s rights at the same time. And there were lots of fathers and husbands who came for their daughters and wives, or brought their young sons to a sea of women as a bit of an education.

When the march was conceived via Facebook, just a few months ago, it seemed that assembling so many causes into one effort would dilute the message and the energy of the movement. And it still remains to be seen whether the global protests that marked Donald Trump’s inaugural weekend can evolve into an effective political effort for all these different needs. But many marchers insisted that this day was just the start of their efforts. That determination is evident in the faces of the marchers in these images by portrait photographer Jody Rogac and in their words.

To see the rest of the photos in this photo essay, taken by Jody Rogac, a portrait photographer based in New York City, please follow the link to the original article on TIME.com.