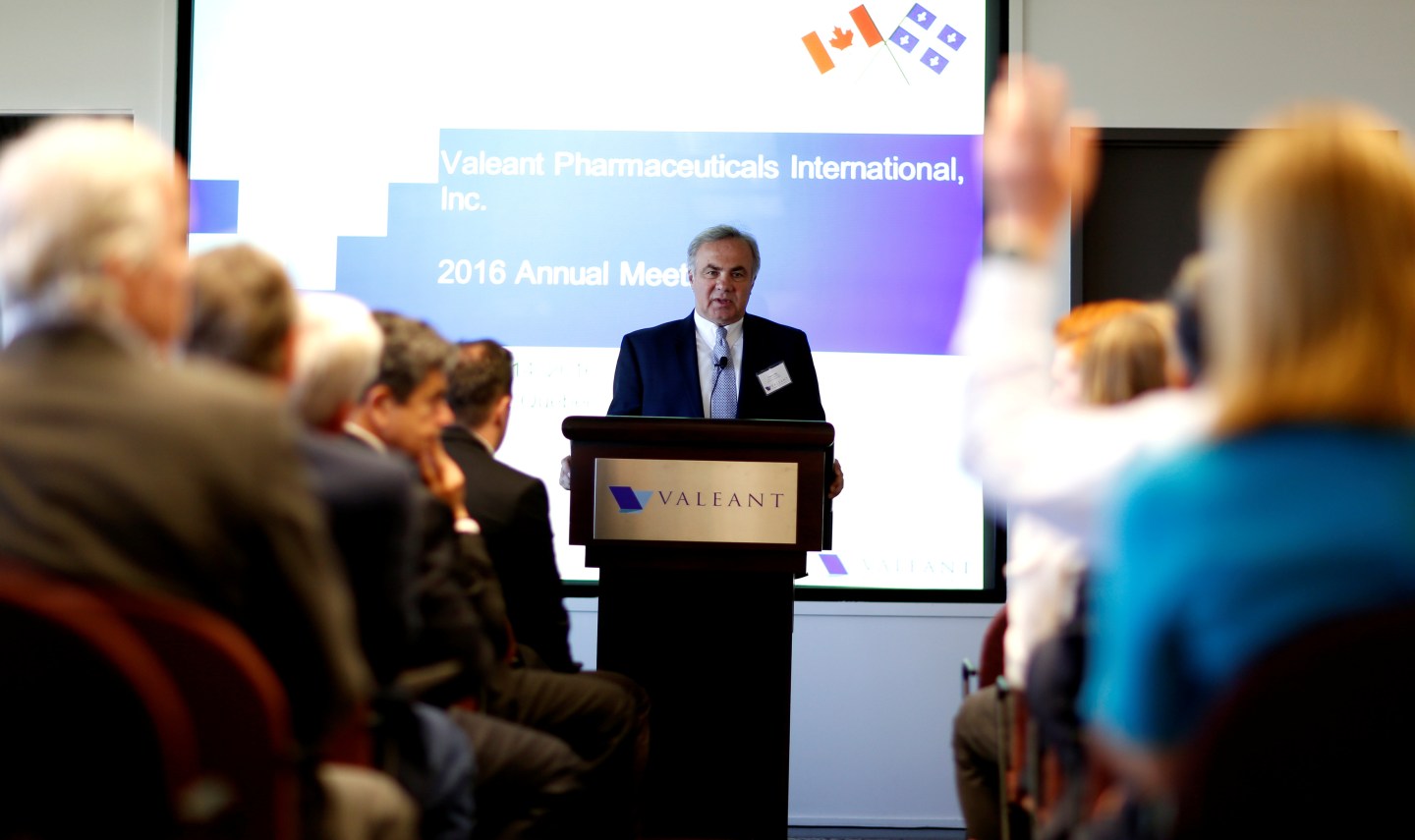 Pharmaceutical giant Valeant (VRX) earned some reprieve Tuesday, with shares of the company rising as much as 15% on news that it had moved to ease its troubling debt burden.

The Canadian company, now led by CEO Joe Papa, announced two separate deals on Monday and Tuesday worth a total of $2.1 billion. One deal involved the sale of its Dendreon cancer business to China’s Sanpower Group for $820 million, and the second deal involved the sale of skincare brands CeraVe, AcneFree, and Ambi to French cosmetics group L’Oreal for $1.3 billion in cash.

For Valeant, the deals are a step toward lowering the $30 billion debt it accumulated, in part, by an acquisition spree it went on in years past.

Here’s what Wall Street analysts have to say about the deal.

BMO Capital Market analysts Gary Nachman and Chris Wolpert wrote in a Tuesday note that Valeant’s decision to sell off some $2.1 billion in assets was a good start to paying down its hefty debt. The team has placed a “hold” rating on the stock.

“The first transaction is the sale of Dendreon (Provenge) to Sanpower Group for $820 million in cash. Provenge is a treatment for prostate cancer and is not core to Valeant; thus, we are not surprised by this asset sale. We estimate Provenge sales of $306 million for 2016, which translates to a multiple of about 2.7x. Valeant has been struggling to accelerate Provenge since it acquired the product, and given that the company does not have a real oncology presence we think this deal makes a lot of sense.”

Douglas Miehm and Joel Hurren over at RBC Capital Markets, who have the equivalent of a “hold” rating on the stock, wrote that they viewed the transactions positively.

“We note that the combined estimated EBITDA multiple of the two transactions is ~9.5x, slightly below management’s 11x EBITDA asset sale guidance. We note that some investors have called into question Valeant’s ability to execute on its commitment to sell assets and subsequently we believe this will mitigate this concern. Although the sale multiple was slightly below the expected ~11x EBITDA, we believe the shares will react favorably to the sale.”

Wells Fargo analyst David Maris maintained his firms “underperform” or “sell” rating on the stock in a Tuesday note.

“We note Valeant has more than $30 billion in total debt and approximately $3.8 billion due in 2018 ­ so the proceeds announced today would cover some but not all of what is due by year­ end 2018…Valeant has not indicated in its press releases if these deals are dilutive to EPS. While Valeant may point to progress in simplifying the company, we believe the base business remains weak and the debt problematic.”

In a note from Monday, Mizuho Securities analysts Irina Koffler and Andrew Galler commented solely on the sale of Dendreon to Sanpower. Koffler noted that Valeant bought Dendreon for $495 million in 2015—so its sale for $820 million represents a 66% premium—which is “pretty good in our view.”

“‘At the same time, the Wall Street Journal noted that Valeant is also exploring a sale of its Indonesia and Vietnam businesses, but valuation of these assets remains unclear. We also expect Valeant to divest its dental business as well as its interests in select geographies. We reiterate our Underperform rating on Valeant ahead of what we believe will be below-consensus 2017 guidance.”

Lennox Gibbs and Ling Han with TD Securities named a few more assets Valeant may sell in the future in a Tuesday note.

“Stay Tuned, More To Come — We have previously estimated that Valeant could raise approximately $8 billion by selling non-core assets including Amoun, Solta, Obagi, and ‘U.S. Diversified.’ If so, this could facilitate repayment of approximately 26% of Valeant’s outstanding debt.”