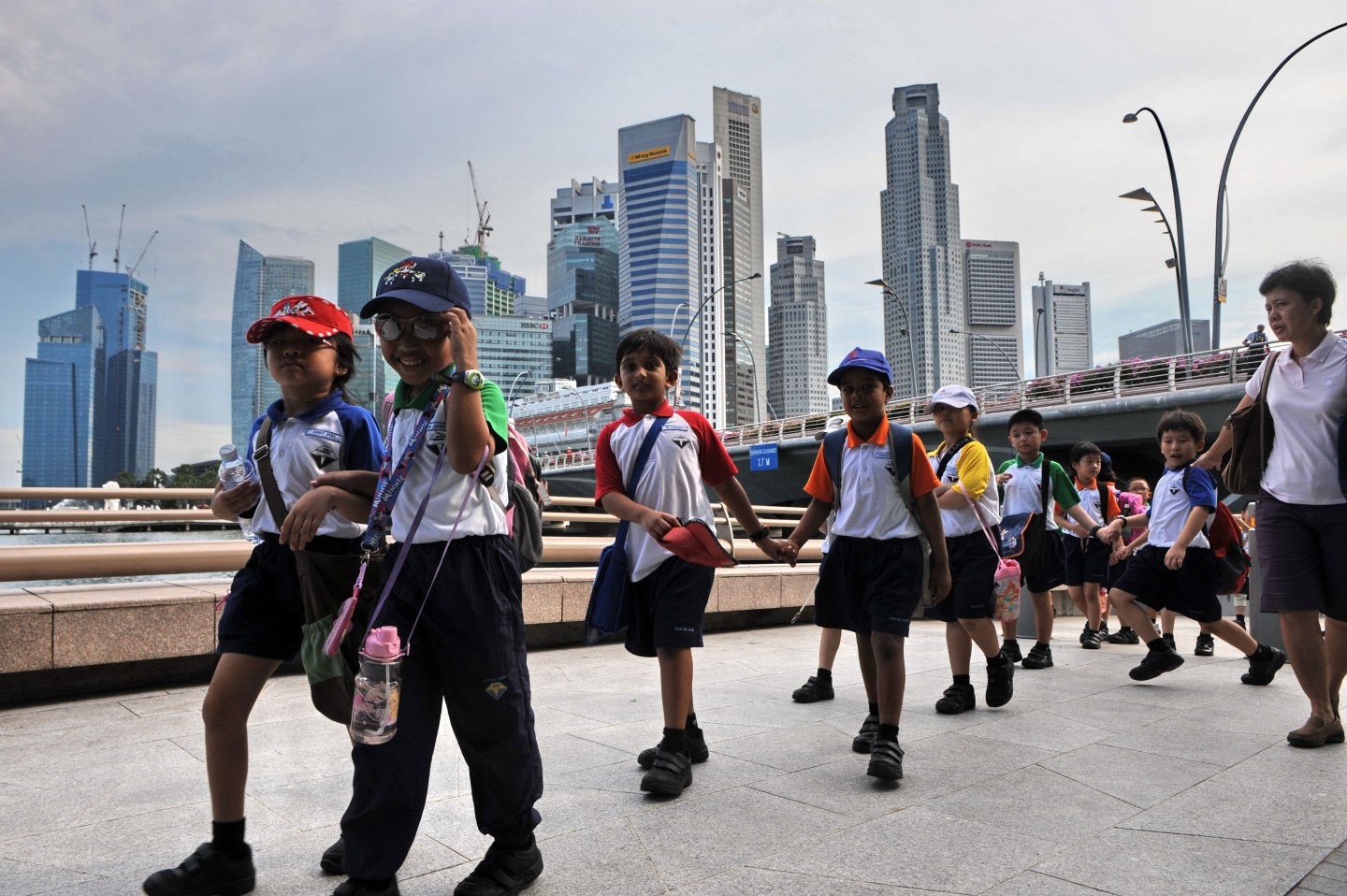 Lifestyle-Asia-literature-culture, FEATURE by Idayu Suparto School children walk in line past the financial district during an outdoor excursion at the Marina Bay in Singapore on May 24, 2010. Could the next J.K. Rowling, the British billionaire author of the Harry Potter series, come from Asia? With more than half the world's population, high literacy rates, increasingly affluent consumers and a rich storytelling tradition, Asia has no shortage of authors who can become the next big thing in children's books. AFP PHOTO/ROSLAN RAHMAN (Photo credit should read ROSLAN RAHMAN/AFP/Getty Images)
ROSLAN RAHMAN AFP/Getty Images

Singapore’s global rankings in maths and science have made its schools the envy of the developed world, but a new push to drive grassroots innovation is prompting local teachers to do the previously unthinkable: go easier on the exams.

The city-state’s schools now have courses with no grades, at least a tenth of admissions to universities are now based on aptitudes rather than results, and the public service is scrapping a long-held practice of classifying officers by their educational qualifications.

Singapore is not about to ditch its obsession with academic excellence and discipline, but a new focus on entrepreneurship – and notions of challenging convention – marks an admission by educators that exams alone can’t produce one ingredient needed for economic success: new ideas.

“For a long time, graduates became entrepreneurs despite the school system not because of it,” said Patrice Choong, a professor at Singapore’s Ngee Ann Polytechnic.

At Ngee Ann, students have to develop a business, or design products, as part of their curriculum. Reaching self-imposed targets such as funding or bringing the 100th customer is key to pass, but there are no courses or grades. All they get are time and advice.

Since independence 51 years ago, Singapore’s schools and universities have had to produce the skilled labor needed by strongly-incentivised multinationals to build what is mostly a service economy.

And it worked: 15-year-olds from Singapore topped the ranks in the OECD’s triennial survey on international education in a remarkable showcase of the city-state’s social and economic progress.

There are downsides, however. Like other Asian societies, Singapore has its own “tiger mums,” who push their children to be the best in school to help set them up for the job market.

Experts say lack of play time chokes creativity. Many students attend after-school activities in the afternoon and tuition in the evening. By the time they finish homework, it’s past midnight.

This pressure has created an education arms race with the private tuition industry one of the main beneficiaries.

Parents can pay as much as S$700 ($491) for four-session courses and some tutors have even become millionaires from their trade.

One such millionaire tutor, Phang Yu Hon, has taught high school physics for the past 20 years but says few of his pupils end up in related fields. Rather, his clients’ main priority is to get the grades needed to get into university law or medicine.

Some of the most unhappy customers, however, are the Singapore-based multinationals the schools were originally designed to provide talent for. A survey of over 100 U.S. businesses in the city by the U.S. Chamber of Commerce saw the local workforce score well on technical skills, but fare worst among Southeast Asian nations on creativity and innovation.

More than a third complained about unwillingness to take risks and a lack of entrepreneurial spirit, compared with the Southeast Asian average of 25%.

Cindy Khoo, a director with the Ministry of Education’s Planning Division, says while a historic focus on performance has kept standards high, the overemphasis on exam results detracts students from the broader purpose of learning: discovery and exploration.

“Society’s mindset also needs to shift over time, to celebrate a multitude of talent and the successes achieved via varied paths,” Khoo told Reuters.

The changes in schools are part of a broader government effort to boost innovation and technology, which also includes a commitment to invest S$19 billion over five years in those areas.

In its first such project, Chongzheng Primary School asked a group of its pupils to spend time in an elderly home and come up with life-improving, marketable solutions. They noticed the elderly often got lost and suggested GPS walking sticks.

The imperative to change has led to the development of “sandbox” frameworks within the public space, which allow for business and policy experimentation without systemic risks in case of failure. Singapore’s central bank, for example, also has a “regulatory sandbox” for financial technology startups.

But critics say barriers to Singapore’s culture of innovation exist not only in schools but also more widely in a political society that places restrictions on freedom of speech and rewards deference to authority.

Authorities in Singapore, a haven of stability in a politically and economically volatile region, believe such restrictions are needed to preserve harmony in a multi-racial society and have contributed to its success.

Lee Quane, Asia director at HR consultancy ECA International, says this is partly why companies complain more about the lack of innovation in Singapore than they do in Hong Kong.

“One difference between Singapore and Hong Kong is that the government is always somewhere close to you … People have been skewed away from critical thinking,” Quane said.