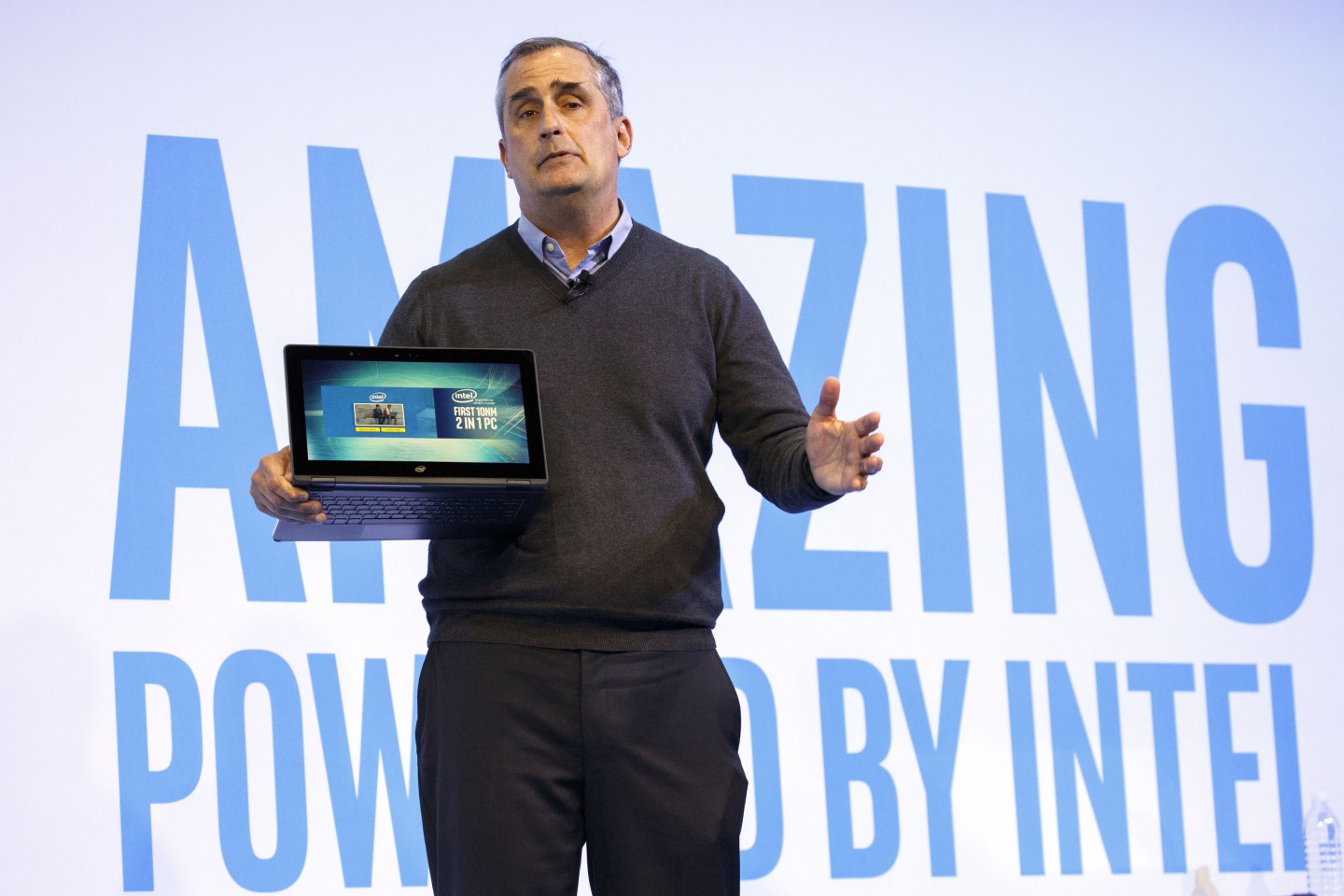 Brian Krzanich, chief executive officer of Intel Corp., speaks during the company's press event at the 2017 Consumer Electronics Show (CES) in Las Vegas, Nevada, U.S., on Wednesday, Jan. 4, 2017. Intel, trying to convert its dominance of computers into a stake in the growing market for chips used in cars, is offering automakers new products aimed at making its technology crucial to the effort to develop self-driving vehicles. Photographer: Patrick T. Fallon/Bloomberg via Getty Images
Photo credit: Bloomberg via Getty Images

Intel CEO Brian Krzanich mostly came to Las Vegas to show off a bunch of new virtual and augmented reality apps at CES. But he couldn’t help starting off with a dig at Intel’s–and the semiconductor industry’s–biggest doubters.

Standing in front of hundreds of reporters and analysts, Krzanich brought out an Intel-branded, thin laptop computer. There was nothing special about the laptop’s design. It was what was on the inside that mattered: Intel’s long-delayed Cannonlake chipset that is etched at a scale of just 10 nanometers, down from 14 nanometers used for currently available chips.

It was the first public display of a device running Cannonlake chips and Krzanich was every inch the proud papa.

“I could show a bunch of foils. I could show a bunch of benchmarks and other kinds of devices,” the CEO explained, as the laptop briefly played a video of an Intel TV commercial before being whisked off stage. “But I thought best to just bring (a) 10 nanometer Canonlake product on stage and let you see it live.”

Confirming rumors at the end of last year, Krzanich said Intel plans to ship Cannonlake chips by the end of 2017. Investors hope the new chips arrive sooner rather than later. Intel’s share price has gained under 8% over the past year, trailing the 12% gain in the S&P 500 Index. Smaller competitor Nvidia’s stock tripled over the past year while shares in Advanced Micro Devices quadrupled.

Moore’s Law, coined by Intel co-founder Gordon Moore, says that faster chips can be developed at the same cost as older chips by shrinking the size of circuitry every two years or less. Chips manufactured at smaller scale pack more individual transistors into the same space as larger scale chips, which can increase performance and energy efficiency while reducing costs.

Until a few years ago, Intel was able to reduce the scale of its chip designs every two years. But that cycle has been lengthening. Between the introduction of 65 nm and 45 nm chips, about 23 months passed. To get from 45 nm to 32 nm took about 27 months, 28 months to go down from there to 22 nm and 30 months to shrink to the current 14 nm process. And that’s where Intel has been stuck since September 2014.

For more on Intel’s strategy, watch:

The physics of squeezing more transistors in the same space have gotten more challenging, requiring more and more expensive equipment and causing more delays. That’s not the same as Moore’s Law ending, Krzanich pointed out. And the need for expensive equipment favors Intel and other large players that can fund the huge new factories.

“I’ve heard the death of Moore’s law more times than anything else in my career,” Krzanich said. “And I’m here today to really show you and tell you that Moore’s Law is alive and well and flourishing.”

The very latest chips Intel offered this week—part of the high end of its Kaby Lake line—remain stuck at 14 nm and barely outperformed comparable processors in the prior Skylake line.

But help is on the horizon—even if Krzanich wasn’t giving away any benchmark results yet. “We’re really excited about the performance” was all he revealed.